TFC Move Ahead After Their Extra-Time Blowout Against D.C. United 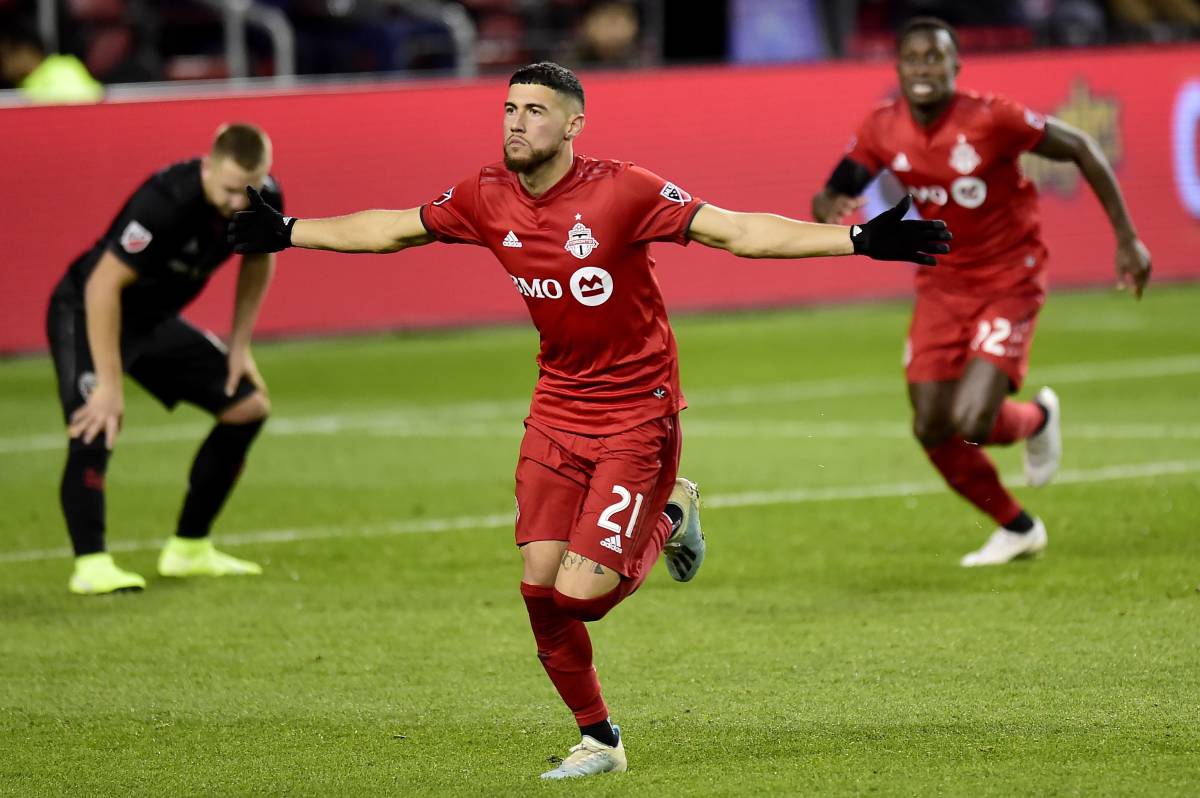 Photo courtesy of Frank Gunn, The Canadian Press
By Noora Popal - BarnBurner.ca
Toronto, ON - An unexpected series of events took place during the MLS playoff match against DC United, which helped Toronto FC advance into the next round. A match that was pretty uneventful throughout the 90 minutes turned sour quite quickly for DC United in overtime.
Both teams appeared to be evenly matched throughout the game. It was clear that they came ready to fight in the knockout match. The atmosphere in the stadium was electric, with thousands of fans who showed up to support The Reds.
DC United started the match with a very strong offensive play. In the 10th minute, Rooney put the ball in the net, but it was ruled an offside. This was the first of many disappointing attempts for Rooney to make his final game a memorable one. After Rooney’s ball was ruled an offside, The Reds stepped up and put pressure on DC’s defense.
A goal from Marco Delgado in the 32nd minute put TFC ahead, 1-0, after the ball bounced off Bill Hamid, allowing the open shot. That goal was what The Reds needed to take the lead. With the crowd right behind them, they continued to battle to increase their lead, but DC United’s defense was not easy to break.
Quentin Westberg protected the net very well during this match, as he has done over the last few games. He made two key back-to-back saves that ultimately rescued his team from being down 2-1. Wayne Rooney both times had very good looks, had it not been for Westberg, both would've gone in. With that, Westberg and his teammates continued to crush Rooney's hopes.
Just as Toronto FC thought they had the game in the bag, with only two minutes left of stoppage time, Lucas Rodriguez scored an equalizing goal with assists from Frederic Brillant and Wayne Rooney. Both teams tied at 1-1, the match was forced to go into overtime.
Extra-Time:
Right off the bat Richie Laryea, who in the 81st minute came on to sub for Benezet, scored TFC’s second goal of the night in the 93rd minute. He scored the goal with assists from Nick Deleon and Michael Bradley. This kicked off a set of events that destroyed Rooney’s and his teams' hopes at winning.
Jonathan Osorio also lit up in extra time, feeding off the energy from the fans and his teammates. He scored twice in the 1st half of overtime, one in the 95th minute and the other in the 103rd minute.
Toronto’s final goal came from Nick Deleon in 106th minute, who was a substitute for Tsubasa Endoh in the 73rd minute. He was assisted by Jonathan Osorio and that final goal sealed DC United’s fate.
With the clock running out, Laryea was fouled in the 117th minute by Paul Arriola, which lead to him receiving a Red Card. Ciman took the free-kick, but it went over the goalpost.
Paul Arriola got a yellow card earlier in the match for a foul he committed. There were several other yellow cards given out to Morrow, Osorio, and Delgado. The crowd was quite unhappy with a lot of the calls that were made (or not made) during the match and booed the referee on several occasions.
All hope seemed to be lost for DC United as they were down 4 goals with only 15 minutes left. Wayne Rooney walked off the field, before the 2nd half of extra time began, for the final time in his career.
Toronto FC now has their minds focused on their next playoff match. The Reds will face New York City FC on Wednesday, October 23rd, at Yankee Stadium.
Toronto FC MLS Soccer MLSPA MLSE Larry Tenenbaum Bill Manning Ali Curtis Greg Vanney Ayo Akinola Jozy Altidore Auro Jr. Jon Bakero Nicolas Benezet Alex Bono Michael Bradley Jay Chapman Laurent Ciman Aidan Daniels Nick DeLeon Marky Delgado Griffin Dorsey Julian Dunn Tsubasa Endoh Liam Fraser Erickson Gallardo Omar Gonzalez Richie Laryea Chris Mavinga Drew Moor Ashtone Morgan Justin Morrow Patrick Mullins Noble Okello Jonathan Osorio Caleb Patterson-Sewell Alejandro Pozuello Jacob Shaffelburg Ryan Telfer Quentin Westberg Eriq Zavaleta DC United Wayne Rooney Lucas Rodriguez Frederic Brilliant Paul Arriola New York City FC Yankee Stadium Frank Gunn The Canadian Press Noora Popal Barn Burner.ca Spanglish Sports World KBuenaRadio.TV La Portada Canada

Depth prevails as Leafs down the Red Wings 5-2