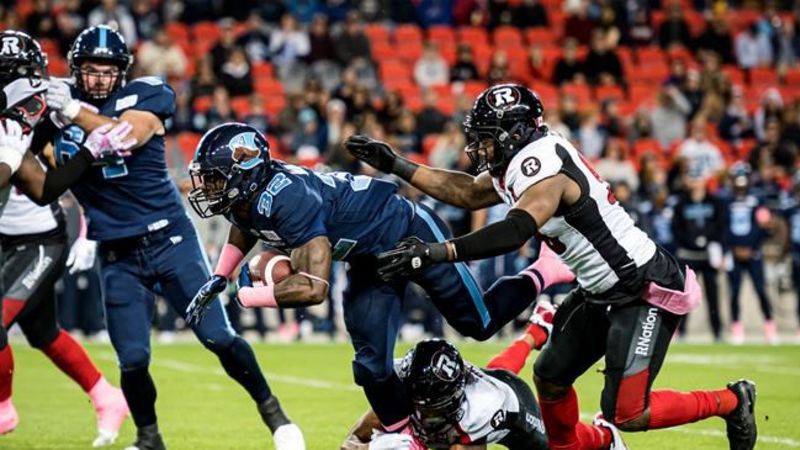 Photo courtesy of Christopher Katsarov, Canadian Press
By Jerred Bapty, BarnBurner.ca
TORONTO. - Newly announced GM Michael ‘Pinball’ Clemons certainly has his work cut out for him in the coming months but, at least the Argonauts got their first win for him early.
SJ Green put on a receiving clinic, racking up a season-high 170 yards and surpassing 10,000 receiving yards and 700 career receptions. He hit 107 yards by half-time and aided the Argos in accumulating 14 points in the 2nd quarter alone.
McLeod Bethel-Thompson was back in the pocket Friday night looking poised again, throwing 300 yards and two touchdowns with just one interception.
James Wilder Jr. also had his top performance of the season on the ground with 82 yards rushing on 15 touches. That will up his donations to breast cancer research.
Armanti Edwards caught both touch-down passes that Bethel-Thompson threw and also had 54 yards on 5 receptions.
After trading field goals, Toronto exploded in the 2nd and 3rd quarters, scoring 24 of their 28 points. James Franklin snuck the first TD into the endzone from the one yard-line and Bethel-Thompson found Edwards in the endzone the first time with less than 10 seconds left in the 1st half.
Ottawa came back in the 3rd with Will Arndt’s first career touchdown pass to RJ Harris. The Argos marched the ball downfield on their next possession with the help of SJ Green, who had a spectacular 42-yard grab to get Toronto down to the 10 yardline. Bethel-Thomspon found Edwards the second time for the TD.
Tyler Crapigna hit a field goal late in the 3rd to extend the Argonaut lead. Toronto conceded another touchdown and field goal in the 4th quarter but, were able to hang on for the victory.
Toronto and Ottawa now share the same record of 3-12 but, the Argonauts have scored approximately 40 more points than the Redblacks.
Toronto heads to Montreal for a tough task against the Alouettes, while Ottawa heads down the QEW to Hamilton to take on the best-in-the-league Ticats.
Toronto Argonauts Bill Manning Michael " Pinball" Clemons John Murphy Corey Chamblin Jacques Chapdelaine Jonathan Crompton BMO Field SJ Green McLeod Bethel-Thompson James Wilder Jr. Armanti Edwards R.J. Harris Tyler Crapigna Montreal Alouettes Ottawa Redblacks Hamilton Tiger Cats Christopher Katsarov The Canadian Press Jerred Bapty BarnBurner.ca Spanglish Sports World KBuena Radio.TV La Portada Canada

Sharing Information that Can Be Used for Identity Theft