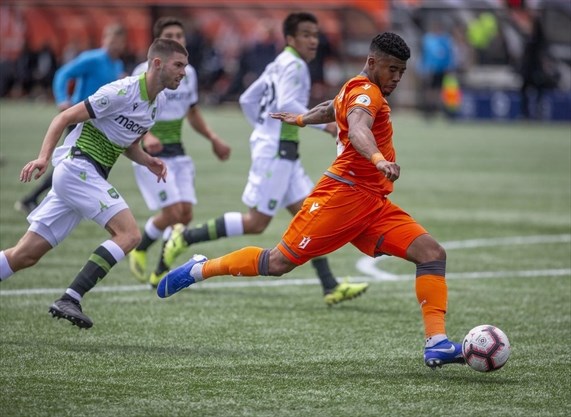 Photo courtesy of Aaron Lynett, The Canadian Press
By Giancarlo Aulino, BarnBurner.ca
TORONTO. - York 9 FC’s Rodrigo Gattas scored off a volley in stoppage time to seal a 4-0 victory over rivals Forge FC, in what was an impressive display of soccer from The Nine Stripes.
York 9 FC head coach Jimmy Brennan went with a 4-1-4-1 formation: Nathan Ingham in-goal; Diyaeddine Abzi, Luca Gasparotto, Morey Doner, and Roger Thompson on the backline; Wataru Murofushi, Kyle Porter, Joseph Di Chiara, Rodrigo Gattas, and captain Manuel Aparicio in the midfield; and Simon Adjei Karlsson as the lone striker.
If York 9 wanted to come out with the result, they needed to be composed and structured defensively to avoid a similar result to last week, where Forge defeated them 1-0 at Tim Hortons Field in Hamilton.
York 9 started off well by getting advantages with Manny Aparicio breaking in past the Forge backline, but he was unable to get a strong shot off on goal. The team continued to press with their attack and had a few close opportunities where they could’ve scored.
Although York 9 were finding a good rhythm with their offense, their defense were equally as important because there were moments on the counterattack that forced them to make the extra effort to keep the game scoreless and allow the team to continue taking risks with their attack.
York 9 FC’s pressure paid off as they got a scoresheet in the 22nd minute, after they had been awarded a penalty kick when midfielder Joseph Di Chiara was taken down in the box. Di Chiara, who drew the penalty kick, stepped up to the spot and struck a nicely placed shot past the Forge goalkeeper Quillan Roberts, to put York 9 up 1-0.
York 9’s ball movement was excellent in the first half; they were creating plays while pushing the ball through the midfield, using the defenders as a way to stretch out Forge’s backline, and sending the attacking players on clear breaks where they had both two-on-two and three-on-two situations.
York 9 picked up where they left off in the second half as they continued their control of the game and it resulted in another goal; Simon Karlsson Adjei, who was just onside, received a lob pass that send him on a one-on-one break with the goalkeeper and used his size to maintain control and struck the ball past Roberts to extend the lead to 2-0.
Diyaeddine Abzi struck a shot that beat Roberts on the far post to put York 9 up 3-0 in the 65th minute. The defender had an excellent game and a few goal scoring opportunities that he couldn’t convert on, so the goal was a fitting reward for his efforts throughout the game.
York 9 FC’s performance will be something the coaching staff will be proud of as this was arguably their best performance of the season not only in terms of goals, but they were able to essentially dominate a top team like Forge in all aspects of the game.
York 9 FC CPL Soccer Jimmy Brennan Nathan Ingham Diyaeddine Abzi Luca Gasparotto Morey Doner Roger Thompson Wataru Murofushi Kyle Porter Joseph Di Chiara Rodrigo Gattas Manuel Aparicio Simon Adjei Karlsson Hamilton Forge FC Tim Hortons Field Quillan Roberts Aaron Lynett The Canadian Press Giancarlo Aulino BarnBurner.ca Spanglish Sports World Frecuencia Deportiva La Portada Canada

Sharing Information that Can Be Used for Identity Theft