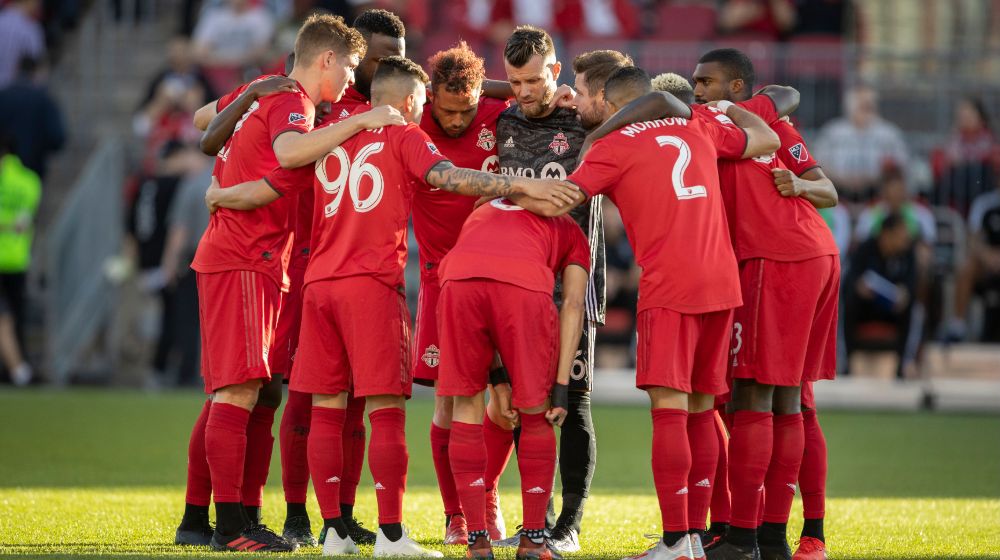 Photo courtesy of Toronto FC Advanced Media
By Giancarlo Aulino
BarnBurner.ca
Toronto. - Toronto FC defender Justin Morrow was the hero when he scored in the 80th minute to give his team a significant home win over rivals the Montreal Impact
Prior to kick-off, a large banner paying tribute to Jozy Altidore was raised in the South end with the caption: Forever In Our Shadow.
This was a crucial game for Toronto, who were tied for the final playoff spot in the MLS Eastern Conference standings. Toronto coach Greg Vanney adjusted his starting-XI accordingly with Quentin Westberg starting in-goal, Justin Morrow, Omar Gonzalez, Chris Mavinga, and Auro Jr. on the back line, Nick DeLeon, Michael Bradley, Marky Delgado, and Erickson Gallardo, and Nico Benezet in midfield, and Jozy Altidore as the strikers up top.
Not only did this game have high stakes in terms of leverage in the MLS Eastern Conference, but it was also a prelude to the Canadian Championship Finals, where both these rival teams will play one another and will look to gain every bit of momentum possible.
It was an aggressive game early on both sides of the pitch, but Toronto were able to get a few great scoring opportunities that got the crowd into the game and helped raise the tempo of play, which seemed to favor the home side.
Toronto defender Chris Mavinga made an excellent defensive play in the 26th minute, when it looked as though Montreal would be in a one-on-one scenario. Mavinga’s challenge was significant because it kept that had been the Impact’s best scoring opportunity up to that point and the play allowed Toronto to continue their aggressive attack and not worry about having to change their approach.
Toronto were having some success attacking from the wings as Erickson Gallardo was able to use his pace to beat the Impact defenders on a few occasions, but Toronto weren’t able to capitalize and score off his crosses into the box.
The game took an unfortunate turn for Toronto as the second half started with Montreal getting the upper hand in terms of their ball movement and possession, which allowed Bojan to have enough space and strike the ball past Westberg from outside the box for his first MLS goal.
Alejandro Pozuelo, who had been subbed into the game for Nick DeLeon at halftime, joined Altidore in the attacking position and was now relied on to score as the team were trailing in an important game and needed a spark offensively.
Toronto FC continued to be resilient with their offense and it would pay off in the 63rd minute when Impact goalkeeper Evan Bush made a save that led to him being out of position and allowed Marky Delgado to strike the ball in the next from outside the box to even the score.

Toronto’s goal turned the tables on the Impact and began providing pressure with their high tempo offense and provided them with plenty of momentum and scoring opportunities; Jozy Altidore and Alejandro Pozuelo both had chances from the same area but had struck the ball wide of the net.


In the 80th minute, Toronto’s hard work would pay off when Justin Morrow struck the ball past Evan Bush and the ball had just bounced over the line, giving the home-side the 2-1 lead.


Toronto FC are back in action next Saturday, when they play the New England Revolution at Gillette Stadium.