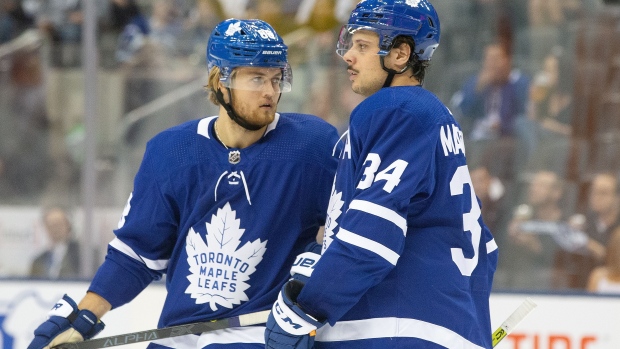 Photo courtesy of Chris Young, The Canadian Press
By Eduardo Harari
TORONTO. - Last night the Leafs showed a renewed game, burst of energy, enthusiasm and emotion that the Leafs Nation probably hasn't  seen in a while.
It was agame in which both the offensive and defensive lines were aligned and showed no holes. After suffering 2 devastating loses to the Senators, this young and fortified team showed stamina and hard work all the way through the game in what finished on a 3 - 0 shot out of the Buffalo Sabres.
Newly and officially appointed captain Auston Matthew demonstrated why he was selected by being involved in 2 of the 3 goals of last nights contest. He not only showed his offensive might but he was a key factor in various key defensive plays.
The Leafs also showed that even when they rest key players the team is well structured to be able to contend in odd situations.
Everyone has been speculating how William Nylander would compete this preseason and if his conditioning would improve now tha he has a guarantee contract which had him miss half of the season last year.
He looked more poised and in better shape prior to the game, but as the game progressed he lacked range and positioning as he was all over the ice on the night.
Nylander had 15 shots on goal in Toronto's top line, that also included Auston Matthews and Andreas Johnsson, who combined for five points in the Leafs' first victory of the NHL pre-season.
The offense of the Leafs came from Johnsson, Matthews and Read but Andersen's 24 stops on the net proved to be the difference on the night as the Sabres had vast opportunities to score.
"Willie might have had the puck tonight as much as he had last year," Leafs head coach Mike Babcock said. "I'm not kidding. He's got to be feeling good about hims dfieelf."
Nylander, had six shots on target against the Sabres, is hoping that play translates to the NHL. this evening game was a good start.
Scotiabank Arena was electrified in it's first event since the Raptors won the NBA championship in June. This game had a different tone as the teams utilized less than half of their potential 2019 - 2020 rosters.
The highlight of the night was produces at both nets where both goalies showed fortitude.
Ullmark robbed Nylander of a sure goal with his skate before Andersen snapped out the glove to deny Jean-Sebastien Dea.
"Some big saves there," Matthews said of his netminder. "Hopefully he's not having to make that many come regular-season time.
Toronto Maple Leafs MLSE NHL NHLPA Brendan Shanahan Kyle Dubas Mike Babcock Buffalo Sabres Ottawa Senators Auston Matthews William Nylander Andreas Johnsson Frederik Andersen Jean-Sebastien Dea Chris Young The Canadian Press Spanglish Sports World KBuenaRadioTV Eduardo Harari La Portada Canada