Photo courtesy of BarnBurner.ca
By Veronica Harris
BarnBurner.ca
Toronto. - Sunday has always been my most favorite day of the week and that was especially true
yesterday. If you weren’t watching the second round of the WNBA Playoffs on Sunday, I am convinced
you don’t like sports. That was the most exciting ball I have seen all year! It was the 5th seed Chicago Kky
going up against the 4th seed Las Vegas Aces and the 6th seed Seattle Storm challenging the 3rd seed
Los Angeles Sparks.

Photo courtesy of news.wagertalk.com
Let’s start by recapping the Storm v Spark game. The Sparks have (now) won 15
straight home games and what a sweet victory this win brought them. 2019 DPOY Natasha Howard
drains a three ball in front of her own bench giving the Storm a 13-11 lead early in the opening quarter.
Howard put up 20 pts, 11 reb making it her 10th double double of the season. Although Seattle will not
win the championship this year, Howard has had an amazing run in the league so far. This is only her 6th
year and in those 6 years, she has won the championship twice (2017 with Minnesota, 2018 with
Seattle), became an All-Star this year, DPOY 2019 and she doesn’t seem to show any signs of slowing
down.
Fun Fact: Natasha Howard was leading the DPOY race with 33/43 votes and the closest behind her was
Nneka Ogwumike with 3 votes!
Chelsea Gray went off in the second quarter giving the Sparks the confidence to take this game. Gray
went 4/7 from beyond the arc finishing with a game high 21 pts, 8 reb and 3 ast. Shooting guard Riquna
Williams hits the contested buzzer beater to end the 3rd quarter and extending LA’s lead to 9 pts, 67-58.
From that moment on, it was all Spark ball and they take it 92-69 and will be playing Tuesday night
against the first place Connecticut Suns with tip off at 6:30 pm.
Fun Fact: First round and second round are single elimination but once you hit the semi-finals it is then
the best of 5 series. For more information on the playoff breakdown, visit
https://www.wnba.com/wnba-regular-season-playoff-formats/ . 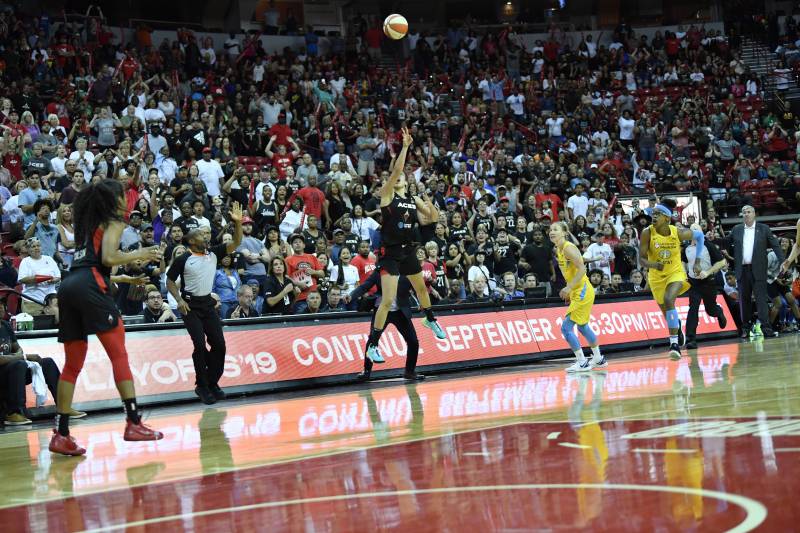 Photo courtesy of Jeff Bottari, Getty Images
Now, we get into the good stuff. I’m talking about the Las Vegas Aces and the Chicago Skys game that
got me out of my seat at least five times! This game will be talked about for many years to come. The
game started with Dearica and ended with Dearica. She hoisted up her ‘6th woman of the year’ award
before tip off and , as I’m sure you’ve seen all over the internet today, hit a running jumper a little past
half court to hit the game winning shot. Hamby is a Forward that sprouted out of Wake Forest, along
with Chris Paul, Tim Duncan and my favorite Mugsy Bogues.
Keep in mind it was actually the Chicago Sky that held the lead most of this game. At the halfway mark,
Chicago was up 51-45 but it seemed that the Aces weren’t betting on their luck so much as their drive
and heart to win this game. The game came down to the dying seconds of that final buzzer with
Chicago’s Astou Ndour hitting a corner three ball bringing the Sky up by one point. But, this is then
where the magic happened- here came the hero Dearica Hamby. Not only was this a beautiful shot, she
intercepted the pass that was intended for Diamond DeShields. That intercepted pass that Hamby hit
started with her teammate Kelsey Plum who chased down Courtney Vandersloot to force her to get rid
of the ball quick! Plum also had a playoff worthy game hitting off balanced mid-range jumpers, nifty
passes finishing with 15 pts and 6 ast, not to mention one that had James Harden dancing in his seat.
This Las Vegas team didn’t only win thanks to these two players, it was literally a team effort. A’ja
Wilson finished with 11 pts and 11 reb, Kayla McBride with 16 pts, and miss Sports Illustrated herself, Liz
Cambage with 23 pts and 17 reb.
WNBA Las Vegas Aces Chicago Skys Seattle Storm Los Angeles Sparks Connecticut Suns Wake Forest Natasha Howard Nneka Ogwumike Chelsea Gray Dearica Hamby Chris Paul Tim Duncan Muggsy Bogues Diamond DeShields Kelsey Plum Courtney Vandersloot James Harden A’ja Wilson Kayla McBride Liz Cambage Jeff Bottari Getty Images BarnBurner.ca KBuena Radio TV La Portada Canada