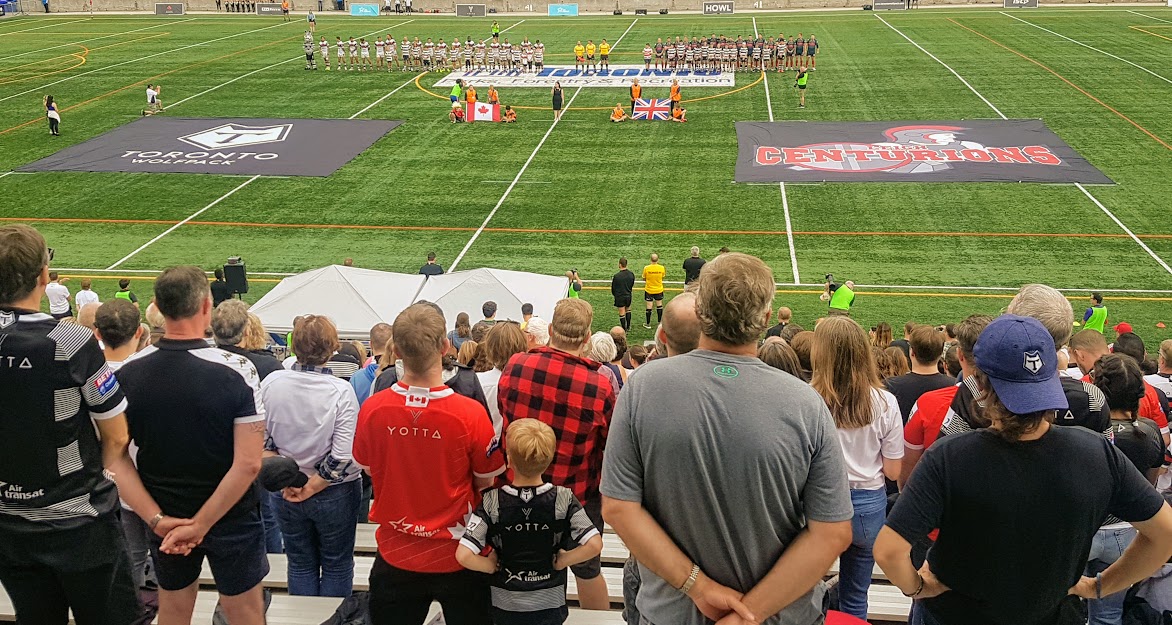 Photo courtesy of Heather Toole
By Heather Toole
BarnBurner.ca
Toronto. - Lamport stadium was a great place to be Saturday afternoon, as the Toronto Wolfpack took on Leigh Centurions, for a fan appreciation day extraordinaire.  The first half had everything the crowd could ask for; defensive play, points on the score board, fights, t-shirt tosses, even a marriage proposal.
As the crowd of over 8,000 gathered both teams took to the field looking strong and focused. The Centurions started what would be a rough and tension filled match, giving a strong push to Toronto’s Liam Kay, who refused to get involved.  Leigh’s defense held the pack off for longer than other teams in recent weeks of play, ready for Toronto’s quick passes, forcing several fumbles which had not been seen in prior weeks.  Ultimately the pack was able to get past the defensive line as Joe Mellor made a quick break and was left with one lone defender, which was not enough to stop a quick dish to #7, Josh McCrone who easily touched the ball down between the posts. O’Brien made good on the conversion, making the game 6 – 0.
Leigh continued to play strong, intercepting the ball and getting into striking distance, however Toronto defense shut down the attempt. Matthew Russell took the ball on a quick run past half, mixed with some impressive crisscross pass work from the team the ball made it to Hakim Miloudi who scored, plus conversion bringing the game to 12 – 0. Gaz Obrien then took the ball across the Centurion line giving them an even bigger upper hand at 18 – 0, and possibly getting into their opponent’s heads, as a fight breaks out immediately after. Toronto tough guy, Gadwin Springer couldn’t resist getting in the mix and landing a few fists. The refs dished out two yellow cards - to Springer and Centurions’ Jacob Emmitt removing them from the game for 10 minutes.  Toronto proceeded as before and scored again making it 24 – 0, with Russell taking it down the side.  Switching up the one-sided scoring, Leigh’s persistence and teamwork was successful, as, Kevin Brown got the team’s first try, Martin Rigger kicking a successful conversion making the score 24 – 6, which carried through into the half.
With action resuming in the second half a high tackle on Toronto, which resembled more of a clothesline rather than a tackle, one minute into play had the crowd on its feet looking for a call.  The refs responded, giving Toronto the opportunity to kick for points which was successful resulting in a bonus 2 bringing the score to 26 – 6. Another small scuffle at the 43’ mark didn’t result in any cards, however continued to propel Toronto with another three trips across the Centurion line upping the score to 40 – 6. Leigh’s Ryan Brierley breaks through Toronto’s defense inside the 72’, with a good conversion making it 40 – 12. In the final seconds of play Beswick makes a break through the sticks for a final 6 points , making the final match score 46 -12.
Toronto Wolfpack RFL Eric Perez David Argyle Brian Noble Brian McDermott Leigh Centurions Liam Kay Joe Mellor Josh McCrone Matthew Russell Gaz O'Brien Gadwin Springer Jacob Emmitt Kevin Brown Ryan Brierley Toronto Wolfpack Advanced Media KBuena Radio Heather Toole Barn Burner Network Spanglish Sports World Eduardo Harari La Portada Canada