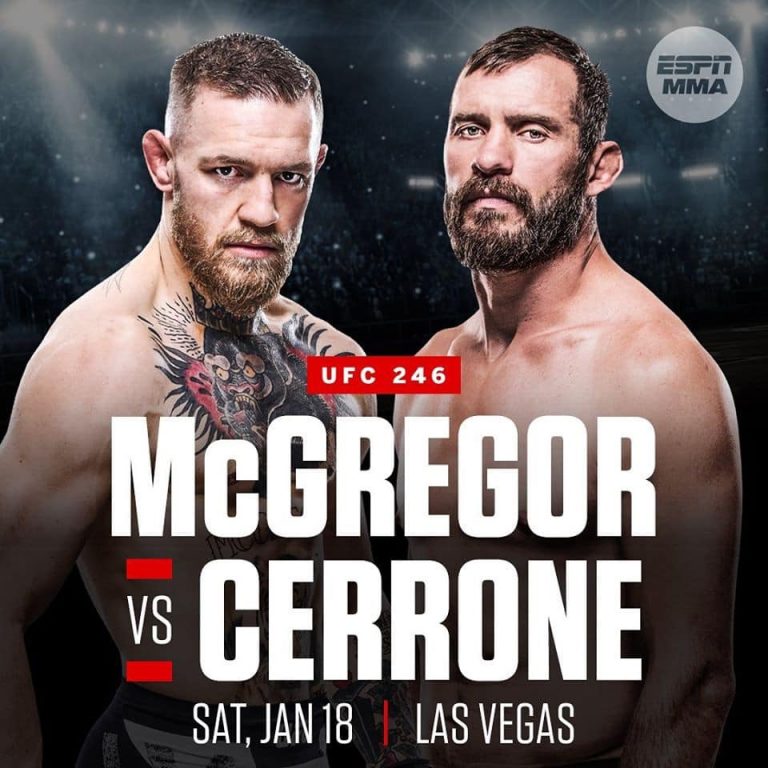 Photo courtesy of UFC and realcombatmedia.com
By Giancarlo Aulino – BarnBurner.ca
TORONTO. - After months of speculation, Conor McGregor’s return fight has been made official for UFC 246 on Saturday, January 18, from the T-Mobile Arena in Las Vegas, Nevada, where he’ll take on Donald “Cowboy” Cerrone in a welterweight bout.
For the better part of 2019, Cerrone and McGregor had exchanged pleasantries on Twitter with regards to possibly competing against one another inside the octagon however, what’s surprising is that the bout won’t be taking place at lightweight (155lbs). Both fighters competed at lightweight in their last fights, so a win at UFC 246 could put the winner right in the mix in the welterweight title picture.
A potential welterweight championship opportunity maybe more appealing especially to McGregor, who has already won the UFC Featherweight and Lightweight Championship and could be looking to make history by adding a third UFC title to his resume. Another fight McGregor may have his eye on in the welterweight division is against Jorge Masvidal, who recently defeated Nate Diaz for the BMF title. McGregor apparently didn’t take too kind to UFC President Dana White claiming Masvidal was “too big” for him and may look to make a statement against Cerrone and set himself up for a future fight with Masvidal.
McGregor hasn’t fought since 2018, where he was defeated by UFC Lightweight Champion Khabib “The Eagle” Nurmagomedov in the main event of UFC 229. Following the bout, chaos ensued when Nurmagomedov jumped over the cage and attacked McGregor’s team, leading to a brawl between both camps and suspensions being handed out.
Cerrone on the other hand has been quite active in 2019; he fought four times and won a performance bonus in each of those fights. The 36-year-old finished the year 2-2; he started the year with back-to-back wins over Alexander Hernandez and Al Iaquinta before losing the two fights that followed to Tony Ferguson and Justin Gaethje.
This is a very intriguing fight considering that Cerrone has great cardio and has been able to take control of fights in the later rounds, while McGregor has been known to put fighters away early with his powerful left hand.
Regardless of how the fight plays out, the buildup and press conferences will be entertaining for fans of both fighters as they don’t shy away from speaking their minds.