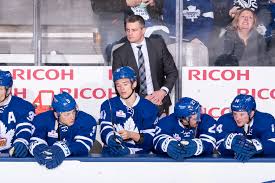 Photo courtesy of James Kurtzman
By Jaime Kurtzman – BarnBurner.ca
TORONTO. - It has been just over a week since the Shana-plan has taken a sharp turn, but was it for the best?
After Toronto lost 4-2 to the Vegas Golden Knights, the highest paid coach in the NHL was fired. Mike Babcock’s Era ended on a 6-game losing streak. Through the first 23 games of the NHL season with Babcock, the Leafs were on pace for 78 points which would have been an all time low since they finished in last place during the 2015-2016 season.
Toronto Marlies head coach, Sheldon Keefe was quickly hired in replacement of Babcock. Keefe has only man’d the ship through five games so far, with four of those games resulting in a win. With the recent success of the Maple Leafs, they are now in third place in the Atlantic Division. Keefe has joined Pat Quinn as the only two coaches in Maple Leafs history to start their reign with three consecutive wins.
It seems like Coach Keefe has found Babcock’s ‘should do’ list and he’s checking it twice. Now Keefe is adjusting that list and it looks like it is starting to pay off. He has already moved defenseman Tyson Barrie on to the first power play line where he has scored most of his points in prior seasons. Not only has Barrie been more productive on that first line, but he scored his first goal as a Leaf there.
There have been other changes as well; Auston Matthews and John Tavares have had more ice time, he promoted Ilya Mikheyev to the second line and Jason Spezza was the third line centre for a couple games. Alongside playing chess with the lines, they’re now shooting more from the slot rather than the point. Keefe’s biggest statement had to have been starting Michael Hutchinson on the first game of a back to back.
The game obviously didn’t go the way they wanted it to, but the blue and white have had backup issues for a while now. Since the start of last season there have been 30 starts without Frederik Andersen resulting in a record of 10-18-2.
Frederik Andersen commented on the plan starting on the second night “We talked a little bit about how to do this scenario, we thought we’d try to do it this way this time, we started out great yesterday, but it would’ve been nice to take all four points, but we’ll take two.”
Toronto has another back to back coming up on December 3rd and 4th against the Philadelphia Flyers, who are in fifth place, and the Colorado Avalanche who are in seventh. The point of playing your starting goaltender on the first half of a back to back is to try secure two points, so it will be interesting to see what Keefe’s game plan will be this week.
Leafs fans are feeling hopeful again and the team seems to be on the right track, so the real question now is, are the playoffs in their future?