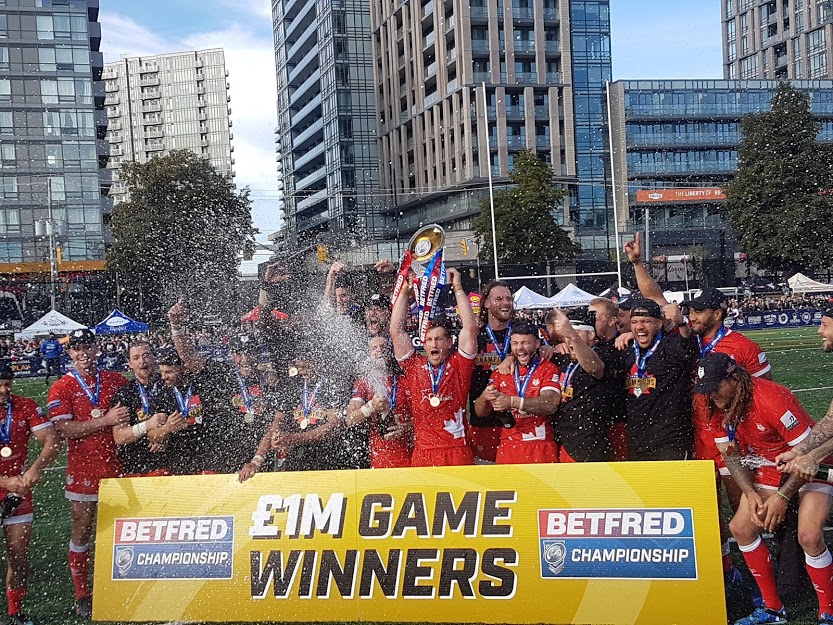 Photo courtesy of BarnBurner.ca
By Heather Toole
BarnBurner.ca
TORONTO. - Toronto is home to another team of champions, after the Wolfpack won the Million Pound game for the Betfred Championship. Infront of a sold-out crowd of 9,974, the team took to the pitch against Featherstone Rovers in a match that lifted the fans to their feet chanting “Super League” with two minutes left of the clock. The victory promotes the Wolfpack to the Super League for the 2020 season.
The first half of the game had Toronto fans nervous, as Featherstone demonstrated why they were in the championship. Showcasing their skills that took down other top placed teams, the Rovers took a six-point lead, after a misplayed ball by Toronto, twenty-seven minutes into the game.  The wolfpack reset, subbed in Gadwin Springer who drove through a tackle attempt moving the team into scoring position where Josh McCrone successfully got a try, however the conversion was missed and the wolfpack were still down by two, with a score of 4-6 heading into halftime.
The second half looked much more like the Wolfpack team that fans are used to as they began a scoring streak which Featherstone had no response for. With three successful trys by Blake Wallace, Bodene Thompson and Joe Mellor, all coupled with a good conversion Toronto took back control 22-6. Toronto was awarded a free kick after a penalty which sealed the game score and crowned The Wolfpack as champions with a final score of 24-6.
Through the celebration team captain Josh McCrone took a moment to talk about the game and the pressure of being down in points at the half, “the pressure is a privilege these are the games we want to play in, and it’s a privilege that we took advantage of today.” He went on to say, “It’s a new set of goals now we are going to the Super League and we want to win that”, showing that despite the huge win they are determined to go even further. The team will only get three and a half weeks of rest before they start the pre-season training and action for the 2020 Super League.
Toronto Wolfpack RFL Eric Perez David Argyle Brian Noble Brian McDermott 2019 Betfred Championship League Leaders Shield Million Pound game Betfred Championship Cup Betfred Champions Featherstone Rovers Super League Godwin Springer Josh McCrone Blake Wallace Bodene Thompson Joe Mellor Toronto Wolfpack Advanced Media KBuena Radio Heather Toole Barn Burner Network Spanglish Sports World Eduardo Harari La Portada Canada