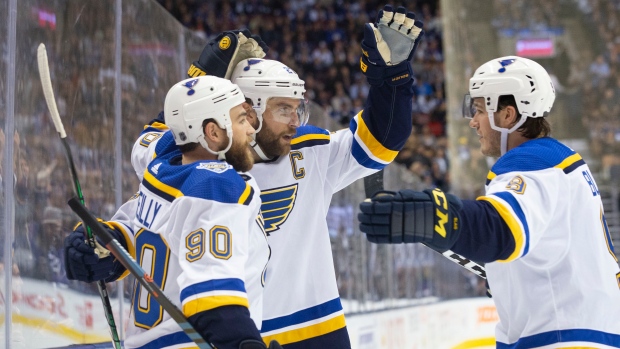 Photo courtesy of Chris Young, The Canadian Press
By Eduardo Harari
TORONTO. - It was a night of many great lessons for the young Leafs squad. The reigning champs from St. Louis rolled into town with two missions in mind.
The first and enjoyable one to happened on Tuesday morning when the NHL Champs will deliver a Stanley Cup ring of their 2018 - 2019 championship to the Hockey Hall of Fame.
The second took place Monday night when the served a lesson to the young and talented Maple Leafs squad of the level of play and stamina you must have to reach the top of the mountain in the NHL.
Man by man, you can say that the talent pool favored the Maple Leafs on the night and then having home ice should have propelled the team to a win but that only happens in paper and numbers.
The difference on the night was the experience of a team that is tuned up and aligned with each other to perfection. The end result was a 3 -2 victory for the Blues.
Alex Pietrangelo sealed the win in the third period and Jordan Binnington made 32 saves in a stellar evening performance.
Toronto out shot St. Louis on the night 77 -51 and took a lead in the second period on goals by Frederik Gauthier and William Nylander. For Nylander it was his second of the season which is an definite improvement of his start from last season.
The Blues continued to utilize their Black and Blue mentality of patience and perseverance with a great forkchecking game that caused the young Maple Leafs team a problem to overcome.
"Good teams find a way to win," said Leafs mastermind Mike Babcock. "They found a way to get one and we didn't."
The other St. Louis goals came from Oskar Sundqvist and Brayden Scheen in the second period.
It was a remarkable performance for Frederik Andersen gone to waste. He managed to make 27 saves and held the defending Champs scoreless through a period of play.
Its the second evening were the Leafs relinquished a lead to the visiting team. And although this one doesn't feel as bad as the one on Saturday night, it's a lesson of what work needs to be done, if Toronto looks to move forth in the playoffs this year.
"We played pretty good," mentioned Andersen. "Unfortunately It didn't go our way."
The goal was the second of the season for the Blues captain, the 400th point of his career and his 23rd game-winner to break a tie with Al MacInnis for the most by a defenceman in franchise history.
"We're playing with a lot more movement," Pietrangelo said. "We did that in the second half of (last season). We're moving a lot more on the blue line, we've got defencemen that can make plays.
"The more movement we have, the better we are."
The Maple Leafs will have two days to strategize before welcoming the wrath of the Lightning on Thursday night at Scotiabank Arena.
Toronto Maple Leafs MLSE NHL NHLPA Brendan Shanahan Kyle Dubas Mike Babcock Scotiabank Arena St. Louis Blues Hockey Hall of Fame Stanley Cup Ring Alex Pietrangelo Jordan Binnington Frederick Gauthier William Nylander Oskar Sundqvist Brayden Scheen Frederik Andersen Montreal Canadiens Al Macinnis Tampa Bay Lightning Chris Young The Canadian Press Spanglish Sports World KBuenaRadioTV Eduardo Harari La Portada Canada

The Raptors appreciate Lowry's efforts with a $ 31 million contract extension