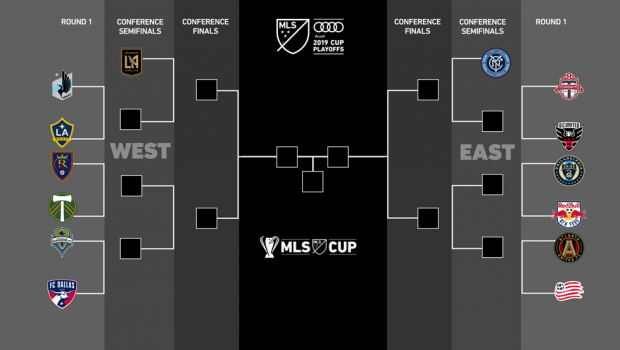 Photo courtesy of MLS Soccer
By Giancarlo Aulino
BarnBurner.ca
TORONTO. - It’s that time of year once again for MLS Soccer fans; Decision Day, where every team play at the exact same time for positioning in the MLS Eastern and Western Conference standings. Both conferences have spots separated by one to two points and made for an exciting afternoon of soccer.
This year the playoff seeding is much more important because the league changed the playoff format that’ll see teams play in a single elimination style as opposed to the home at home with aggregate scoring format.
LAFC are in the most favorable position because they won the Supporters’ Shield for most points in the league this season, which means that they will all their playoff games at home.
All games kicked off shortly after 4pm and it didn’t take long for the excitement to be heightened; Atlanta United and New England traded goals before the 10 minute mark of their game and Eastern Conference leading New York City FC, took a two goal lead over Philadelphia to spoil their chances of leap frogging Atlanta for the second seed.
On the Canadian side of things, Toronto FC will be the only Canadian team in this year’s playoffs and after their 1-0 win over the Columbus Crew, they will now be hosting DC United at BMO Field. As a result of the Montreal Impact essentially assisting their rivals by defeating the New York Red Bulls 3-0 in their season finale.
After it was all said and done, the Eastern conference had a different look to it; Toronto FC moved into 4th place, DC United moved down to 5th place, and New York Red Bulls moved to 6th place. This is significant for Toronto FC because they will have an opportunity to host a single elimination playoff game and begin their journey to a second MLS Cup in front of their supporters.
There is some concern for Toronto because forward Jozy Altidore was subbed off in the second half due to an injury, so hopefully for their sake he’ll be back to one hundred percent in time for their playoff game with DC United as he will play a crucial role in the team’s success.
The Western Conference playoff picture is as followed: LAFC gain a first-round bye, Seattle host FC Dallas, Real Salt Lake host Portland, and Minnesota host LA Galaxy.
All the games provided for a great end to the 2019 regular season and a nice prelude of what’s to come for the 2019 MLS Cup playoffs.
MLSSoccer LAFC Atlanta United New England Revolution New York FC Philadelphia Union Toronto FC Columbus Crew DC United Montreal Impact New York Red Bulls Jozy Altidore Seattle Sounders FC Dallas Real Salt Lake Portland Timbers Minnesota United FC LA Galaxy MLS Soccer Advanced Media Spanglish Sports World BarnBurner.ca Giancarlo Aulino KBuena Radio TV La Portada Canada