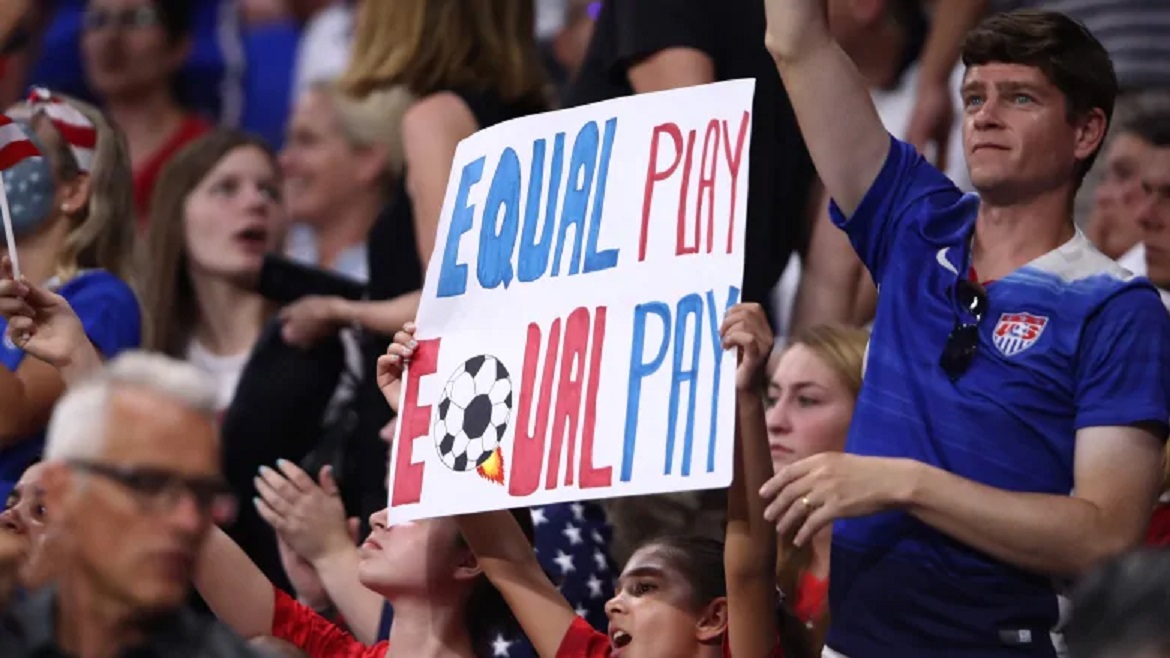 Photo courtesy of Alex Grimm, Getty Images
By Eduardo Harari
TORONTO. - There is no doubt that France 2019 opened Pandoras Box for FIFA  as fans chanted “Equal pay” and directed their boos at FIFA's boss Gianni Infantino as he took the stage for the awards and trophy presentation of the FIFA Women’s World Cup iat Stade de Lyon, in protest against the revenue discrepancies between men’s and women’s football globally.
For winning the tittle, the Americans got a $4 million cash prize, while their French men took home a staggering $38 million last year. In other words, the champions from the men’s world cup received $34 million more than the total combined prize money in the women’s tournament, which is $30 million.
Two days before the WWC final in Lyon Infantino annouced that FIFA will double it’s investment in the women’s game. There is the plan to increase the prize pool of the women’s World Cup to $60 million in 2023 which doesn't even come close to the huge pay gap as that of the men, which was $400 million in Russia, and the increase that has been set at $440 million for Qatar.
“I think everyone is ready for this conversation to move to the next level,” USWNT star Megan Rapinoe said, in reaction to the chants and boos. “I think we’re done with the ‘are we worth it? Should we have equal pay? … Everyone is done with that - fans are done with that, players are done with that, in a lot of ways I think sponsors and everyone is done with that. Let’s get to the next point of what’s next, how do we support women’s federation and women’s programmes around the world?”
But as Rapinoe noted, women players obviously pushed the conversation to a whole new hard-to-ignore level in France with top-notch performances that attracted incredible viewing figures from different parts of the world.
“We as players, every player at this World Cup, put on the most incredible show that you could ever ask for. We cannot do anything more to impress more, to be better ambassadors, to take on more, to play better or do anything. It’s time to take it forward to the next step. A little public shame never hurts anybody, right? I’m down with the boos,” she concluded.
28 members of the USWNT filed a lawsuit against the US Soccer Federation alleging they are paid less than the men even when their consistency in obtainig outstanding results has “translated into substantial revenue generation and profits” for the federation.  The Washington Post reported that the women’s games have generated about $900 K more revenue than the men’s games from fiscal 2016 to 2018.
A study by The Guardian showed the pay discrepancies between the men’s and women’s US teams, it was discovered that the maximum World Cup bonus earnings for a USWNT player is $261,000 if they win the title, while a USMNT player could earn as much as $1.1 million for the same feat.
This past week, the U.S. Senator from West Virginia, Joe Manchin, took a stand for equal pay for the USWNT. He introduced a bill that would prevent "any and all" federal funding for the 2026 North American World Cup, unless the US Soccer Federation agrees to pay its men's and women's teams equally.
Another World Cup has come and gone, but the cry for equal pay is now louder. France 2019 has placed the issue in a new plateau and now the fans are more aware and started talking about it.
France 2019 FIFA Gianni Infantino USWNT USMNT Megan Rapinoe Washington Post The Guardian Joe Manchin Alex Grimm Getty Images Spanglish Sports World Frecuencia Deportiva Barn Burner Network Eduardo Harari La Portada Canada

FIBA and Genius Sports announce an extension of their technology partnership