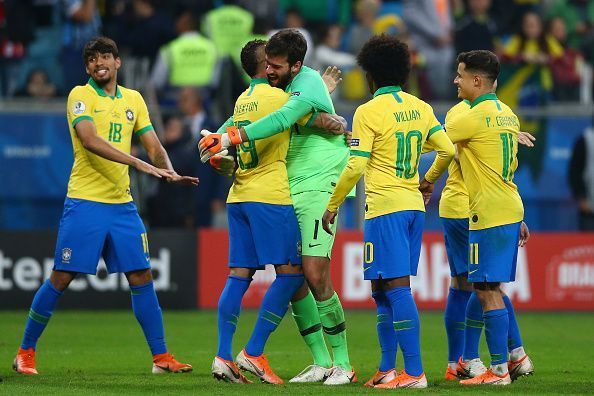 Photo courtesy of www.sportskeeda.com
By Eduardo Harari
TORONTO. – Some might call it “Sour Grapes”, but in South America is a standard day to day situation when Argentina’s National Team loses a match that they failed to score in.
The Argentinian Football Federation has officially filled a six-page memorandum over the referring during the semifinal game that saw archrival Brazil win in a 2-0 technical performance. At the forefront of the issue is of course Argentina’s proud son Lionel Messi, who hasn’t helped his squad to a major international success in his career.
Argentina’s main argument is that Referee Roddy Zambrano of Ecuador did not use the controversial VAR in various instances that could have produced penalties for their squad.
The first goal came from a brilliant run by Dani Alves evading 3 defenders before passing the ball to Firmino down the right side, who made a perfect cross to Jesus for the light tap in.
Argentina had various escapes during the first half including a masterful display of technique by Messi who slipped between two defenders and had a clear sight of the net but shot high and wide. The half ended with the hosts leading 1-0.
The second half was higher and extremely defensive on both sides of the pitch, Argentina controlled the ball must of time but it was Jesus this time who found a hole down the left side and squandered before crossing a pass to Firmino for the closer and putting Brazil on a 2-0 lead.
After the game, it was immediately that both Lionel Messi and coach Lionel Scaloni started their attacks about the officiating.
“They found the net early and the second goal came from a penalty they didn’t award,” Messi told reporters.
“The officiating was crazy. There were clear penalties, on Nicolas Otamendi, on Sergio Aguero.
“He [the referee] was on their side. In every divided ball or dispute, he tilted the pitch their way.
“It’s not an excuse but the truth is that. In this Copa they kept on blowing for stupid things, for handballs, penalties.”
Copa America Conmebol Brazil 2019 Brazil Argentina Roddy Zambrano Dani Alves Jesus Formino Lionel Messi Lionel Scaloni Nicolas Otamendi Sergio Aguero sportskeeda.com Spanglish Sports World Frecuencia Deportiva Eduardo Harari La Portada Canada