Stanton's First-Inning Homer All the Yankees Need to Win Opener 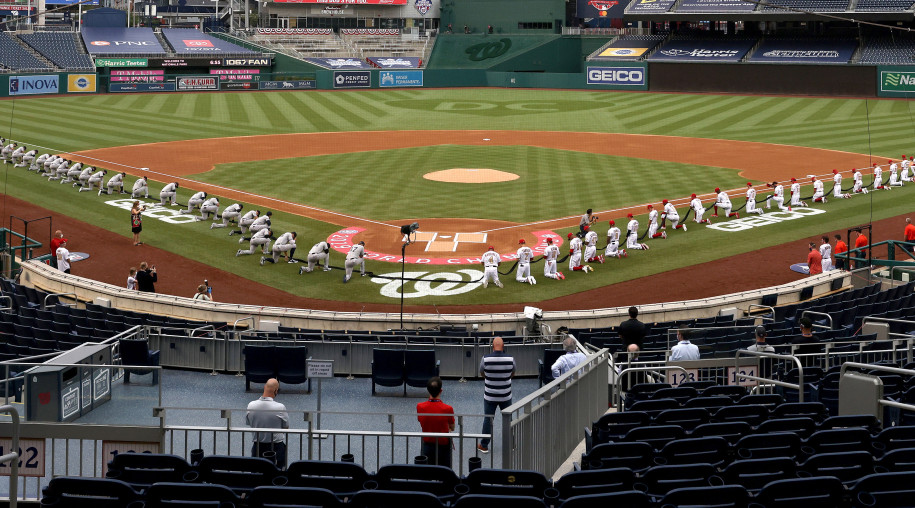 Photo courtesy of Geoff Burke, USA Today Sports
By Logan Lockhart
BarnBurner Network
Washington. - The first game of the 2020 MLB season only lasted 5.1 innings due severe weather in Washington D.C
Giancarlo Stanton’s two-run home run in the first inning was all the offense New York needed as the Yankees defeated the Nationals 4-1 in 5.1 innings to kick off the 2020 MLB season.
On July 23, it was finally time to declare that baseball is back--the defending World Series champions in Washington hosted an upcoming championship contender in New York, to officially begin the 60-game sprint.
After an Aaron Judge single to left field, Giancarlo Stanton drove him in by-way of a home run to give the Yankees (1-0) a 2-0 lead in the first.
Stanton appeared in only 18 games in 2019, after a series of injuries held him back to follow up on a 38-home run year in 2018.
A starting pitching matchup of Max Scherzer and newly signed Yankees ace Gerrit Cole was the story as the first pitch approached--the $324 million dollar man in New York did not disappoint.
Cole threw five innings of one-hit ball, while only giving up one run and striking out five.
Aaron Judge notched his second hit of the night in the third, this time a double, driving in Tyler Wade from first, to extend New York’s lead to 3-1
Judge took a step back in 2019 offensively, after appearing in 102 games. The right fielder hit 27 long-balls, far removed from his 52-home run rookie effort in 2017.
After Yankees second baseman and MVP candidate from 2019 DJ LeMahieu tested positive for COVID-19 on July 4th, the team decided not to start the former batting champion, opting to give Wade the nod in the infield instead.
Despite striking out 10 through five and a third innings of work, Scherzer found himself in trouble on multiple occasions, including a bases loaded jam in the fifth when the Yankees added to their lead with the help of Giancarlo Stanton’s RBI single to right.
The lone run for the Nationals (0-1) came in the bottom half of the first when Adam Eaton hit a solo homer off Cole to cut the Yankees lead to 2-1.
Eaton's first of the year was Washington's only hit of the night.
A rain delay took place in the top of the sixth, after about an hour of lightning. The game stopped as the Yankees yet again put pressure on Scherzer, with runners on first and third with one out.
Nationals outfielder Juan Soto was inactive, due to a positive COVID-19 test. The team has placed the 21-year-old on the COVID IL and must take two negative tests before returning to the field.
The Yankees and Nationals will play the second of the three-game series Saturday afternoon in Washington.
MLB MLBPA New York Yankees Washington Nationals Opening Day BarnBurner Network Logan Lockhart