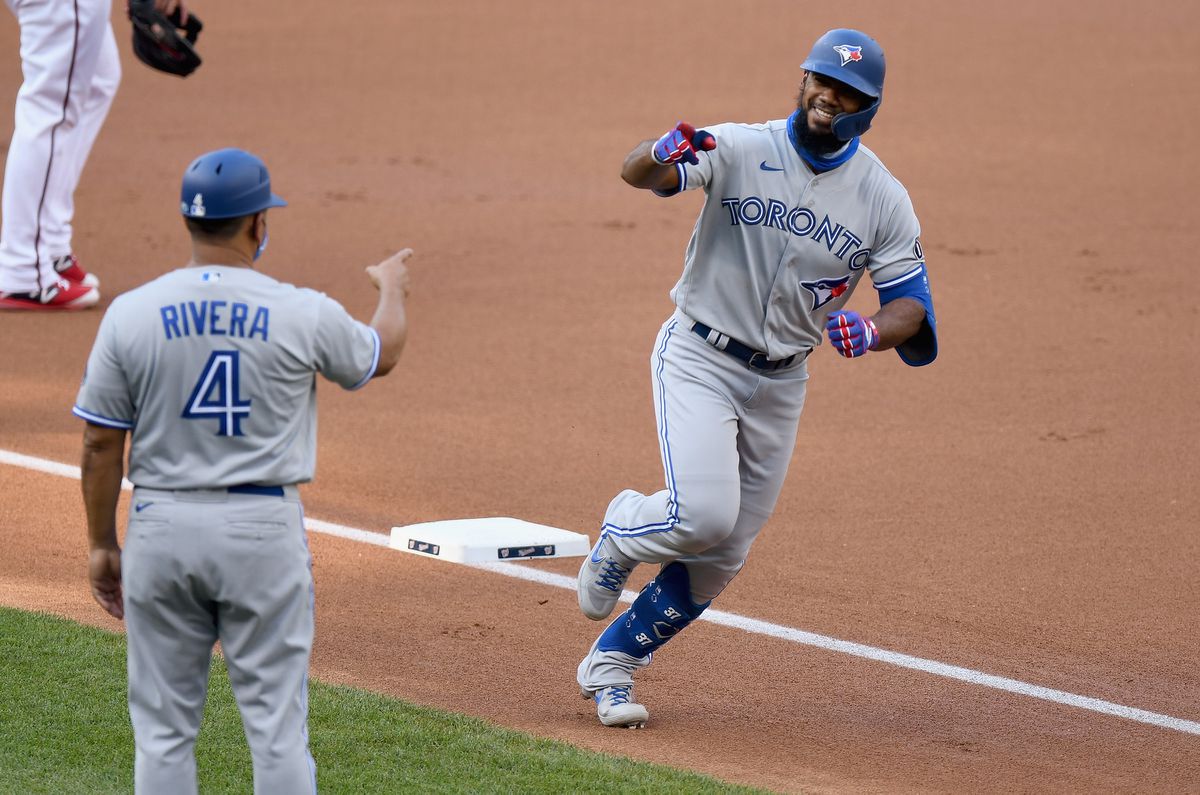 Photo courtesy of Greg Fiume, Getty Images
By Logan Lockhart
BarnBurner Network
TORONTO. - After a crushing loss Sunday afternoon in Tampa, the Blue Jays started off their four-game series against the Nationals strong
Teoscar Hernandez’s two home runs led the Blue Jays to a 4-1 victory against the Nationals on Monday night in Washington.
Hernandez’s first home run was a lead off shot to right field, helping Toronto improve their record to 2-2.
Not only did Hernandez take on the task of playing centerfield, due to a Randal Grichuk injury, but he also was placed in the lead-off role by Charlie Montoyo, after Bo Bichette was a late scratch just minutes before pitch.
The team announced that Bichette had hamstring tightness prior to the series opener in Washington, and as a result was given the night off.
After coming off a game where the Blue Jays held a 4-1 lead into the ninth inning against the Rays, only to see it disappear when closer Ken Giles was unable to get the final out of frame, and later being removed due to an elbow injury, Toronto bounced back by-way of the solo home run against the defending World Series champions.
Other than Hernandez’s two solo shots, Rowdy Tellez and Danny Jansen also got in on the action by hitting home runs to make up all of the Blue Jays four runs.
Trent Thornton made his first start of the season, pitching four innings while giving up eight hits and one earned run, as well as striking out three.
Despite striking out seven batters in five innings of work, Nationals veteran starter Anibal Sanchez allowed six hits and couldn’t limit the home run ball.
The breakout for Toronto came in the fourth inning when Tellez and Jansen both went deep, extending the Blue Jays lead to 3-0.
The Nationals out hit the Blue Jays 10-6, but failed to capitalize with runners in scoring position, particularly in their one-run fourth inning.
Thornton was able to limit the damage and offensive production from Washington, keeping the Blue Jays lead at 3-1.
A.J Cole, Ryan Borucki, Jordan Romano, Rafael Dolis and Anthony Bass allowed no runs collectively in five innings of combined work in relief of Thornton to close out the game and hand the Nationals their third loss of a year.
Bass was credited with his first save of the year after retiring three of the four batter he saw in the ninth. With Giles being placed on the injured list, the native of Dearborn, Michigan will occupy the closer’s role in the meantime.
Toronto provided its starting pitcher with run support early, something the team was unable to do on both Saturday and Sunday, contributing to the team’s two losses on the year.
After reaching base in 33 consecutive games dating back to last season, Cavan Biggio failed to extend his on-base streak.
The Blue Jays and Nationals will play the second of a four-game series Tuesday night in Washington. On Wednesday for game three, Toronto will act as the home team batting last, due to the team’s home facility at Sahlen Field in Buffalo, NY for the 2020 season not being available for major league games until August 11th.
Tanner Roark will make his Blue Jays debut, starting against his former team.
MLB MLBPA Rogers Communications Toronto Blue Jays Washington Nationals Teoscar Hernandez Greg Fiume Getty Images BarnBurner Network Logan Lockhart