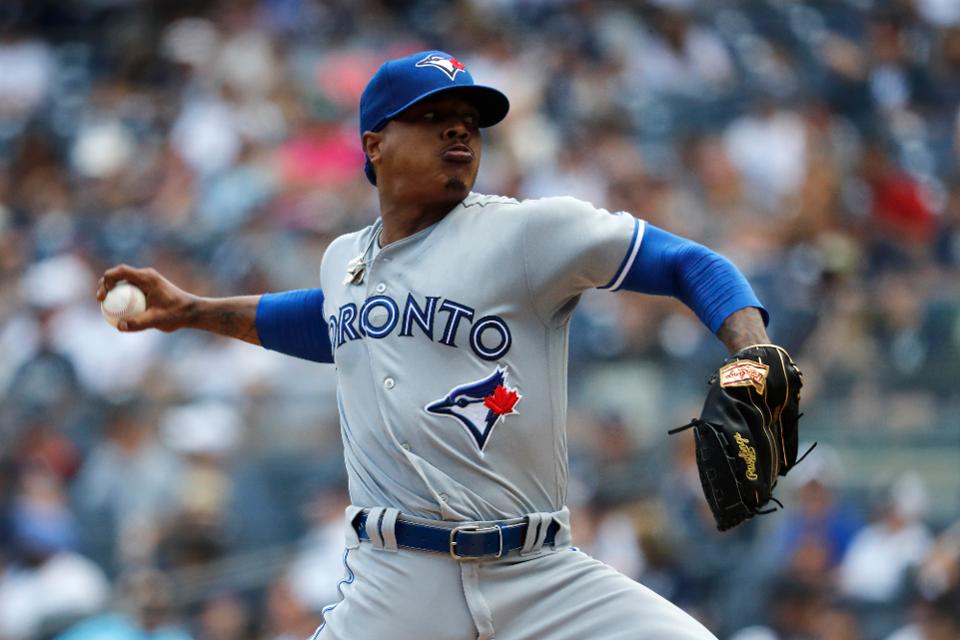 Photo courtesy of Michael Owens, Getty Images
By Eduardo Harari
TORONTO. – The July 31 deadline is almost here and as the clock keeps ticking so is the uncertainty of many of the members of the Blue Jays locker room.
Blue Jay fans can certainly remember the never-ending stories of last years trades which saw the departure of great players like Curtis Granderson, Josh Donaldson, Aaron Loup, J.A. Happ, Roberto Osuna amongst others. And although some of the talent acquired in those deals have flourished, others have been taking a lot more time to develop.
It has been a very difficult season for both the fans and even the baseball analysts to read the thinking of the organizations management when it comes to the direction, they are taking the team. Yes, we know what GM Ross Atkins and Mark Shapiro have told us about rebuilding and making the team young again. But is their objective more than just that or is there a hidden agenda which is not being exposed?
Let’s see who the bargaining chips are they are playing with. As we all know the name of the game in baseball today is pitching so when you analyze that there are only a couple of names that quickly come to mind Marcus Stroman, Daniel Hudson and Ken Giles.
Marcus Stroman has been in the trading rumors since mid-May as it’s a known fact that he has bee outspoken on the issues of the organization since the off season. The New York Yankees, Atlanta Braves, Los Angeles Dodgers, San Diego Padres and the Cincinnati Reds are the teams that have been actively scouting him in order to assess his value. According to David O’Brien of the Athletic, the value the Blue Jay’s can estimate to get for Stroman would be similar to that of what the Tampa Bay Rays got for Chris Archer.
With a less than efficient bullpen this season, the defending World Champions Boston Red Sox have been trying to find a late inning enforcer that can get them out of trouble. It has been mentioned that they are looking at both Giles and Hudson as possible replacements for Craig Kimbrel.
Now we must deal with the other ponds on the playing field starting with Justin Smoak, Eric Sogard, Lourdes Gurriel Jr. and Freddy Galvis.  Freddy Galvis has been probably one of the bright spots of the season for the Blue Jay’s and Charlie Montoyo. A guy that gives you 200% even when he is injured. Galvis not only gives you consistent defense and offense but has become one of the quiet leaders in the club house.
Lourdes Gurriel Jr. most be in the radars of any team that needs a young powerful bat and now since his resurrection in left field an all-around great utility fielder.
Although most teams are not looking for a 33 years old infielder, Eric Sogard can prove to be a very valuable contributor as he has been for the Blue Jays this season batting .305/.389/.491 with 10 home runs and 30 RBis in 70 games. Moving Sogard would open a space for must likely Bo Bichette who is waiting patiently in the minors for his chance at the big club.
The question now is whether Atkins will pull the plug or remain passively waiting for the offseason again.
Toronto Blue Jays Rogers Communications MLB MLBPA Mark Shapiro Ross Atkins Charlie Montoyo Rogers Centre Curtis Granderson Josh Donaldson Aaron Loup J.A. Happ Roberto Osuna Marcus Stroman Daniel Hudson Ken Giles New York Yankees Atlanta Braves Los Angeles Dodgers San Diego Padres Cincinnati Reds David O’Brien The Athletic Tampa Bay Rays Chris Archer Boston Red Sox Craig Kimbrel Justin Smoak Eric Sogard Lourdes Gurriel Jr. Freddy Galvis Michael Owens Getty Images Spanglish Sports World KBuena Radio Barn Burner Network Eduardo Harari La Portada Canada