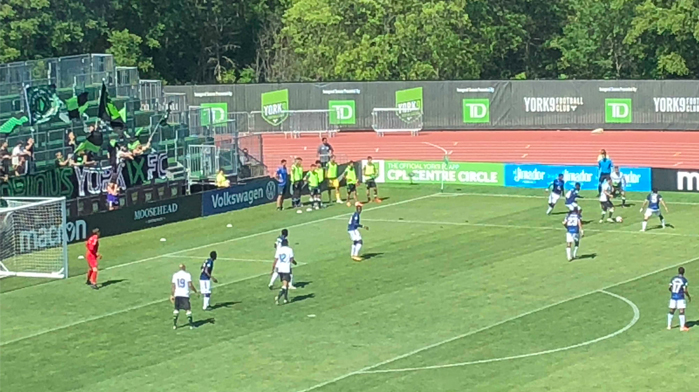 Staff Photo
By Giancarlo Aulino
BarnBurner.ca
TORONTO. - Ryan Telfer was the hero for York 9 FC as he scored the go-ahead goal in the 79th minute to secure a big win and three-points in the standings.
York 9 FC coach Jimmy Brennan went back to a 4-5-2 formation with Diyaeddine Abzi, Luca Gasparotto, Morey Doner, and Roger Thompson on the backline, Joseph Di Chiara, Wataru Murofushi, Kyle Porter, Ryan Telfer, and captain Manuel Aparicio in the midfield, and Simon Karlsson Adjei as the lone striker uptop. York 9 were coming into this game following an impressive mid-week draw with the Montreal Impact in their first-leg matchup in the Canadian Championship. The team were looking to carry that momentum into today’s game with FC Edmonton.
Ryan Telfer had a great opportunity in the 7th minute, when he struck the ball off a volley, but was stopped by FC Edmonton goalkeeper Connor James. Telfer brought a lot of pace to the position and made it difficult for Edmonton’s defenders to mark him.
York 9 FC were the much better team early on in the game and their active and aggressive attack payed off in the 13th minute, when Karlsson Adjei received the ball in a two-on-one scenario against Edmonton’s defense following a giveaway and found Kyle Porter, who took advantage of the space and time and struck the ball in the back of the net to give York 9 the 1-0 lead.
The first half was a great showcase of the type of play York 9 FC hope to display on a consistent basis; the midfielders were creative in their playmaking, the attackers were aggressive going towards goal, and the defenders were solid and maintained their shape in the backline.
The early portion of the second half saw York 9 pick up right where they left off; their midfielders were doing an excellent job creating opportunities for their attackers and the defenders assisted Ingham by clearing out the ball when there would be scoring opportunities for Edmonton.
Fortunately for Edmonton, they were able to tie the game in the 67th when Ramon Soria headed the ball past Nathan Ingham to tie the goal 1-1. This was a goal York 9 would likely want back as they had done a great job defensively and were able to keep their composure with the lead until that point.
York 9 FC regained the lead in the 79th minute after Edmonton midfielder Bruno Zebie struck a powerful shot off the post, which lead to York 9 captain Manny Aparicio sending a perfectly placed lob pass to Ryan Telfer, who used his pace to beat the defender and struck the ball past Edmonton goalkeeper Connor James, giving York 9 the 2-1 lead.
York 9 FC CPL Soccer Jimmy Brennan Diyaeddine Abzi Luca Gasparotto Morey Doner Roger Thompson Joseph Di Chiara Wataru Murofushi Kyle Porter Ryan Telfer Manuel Aparicio Simon Karlsson Adjei Montreal Impact Edmonton FC Canadian Championship Connor James Ramon Soria Nathan Ingham Bruno Zebie Giancarlo Aulino BarnBurner.ca Spanglish Sports World Frecuencia Deportiva La Portada Canada

Extreme Rules could prove be a game changer