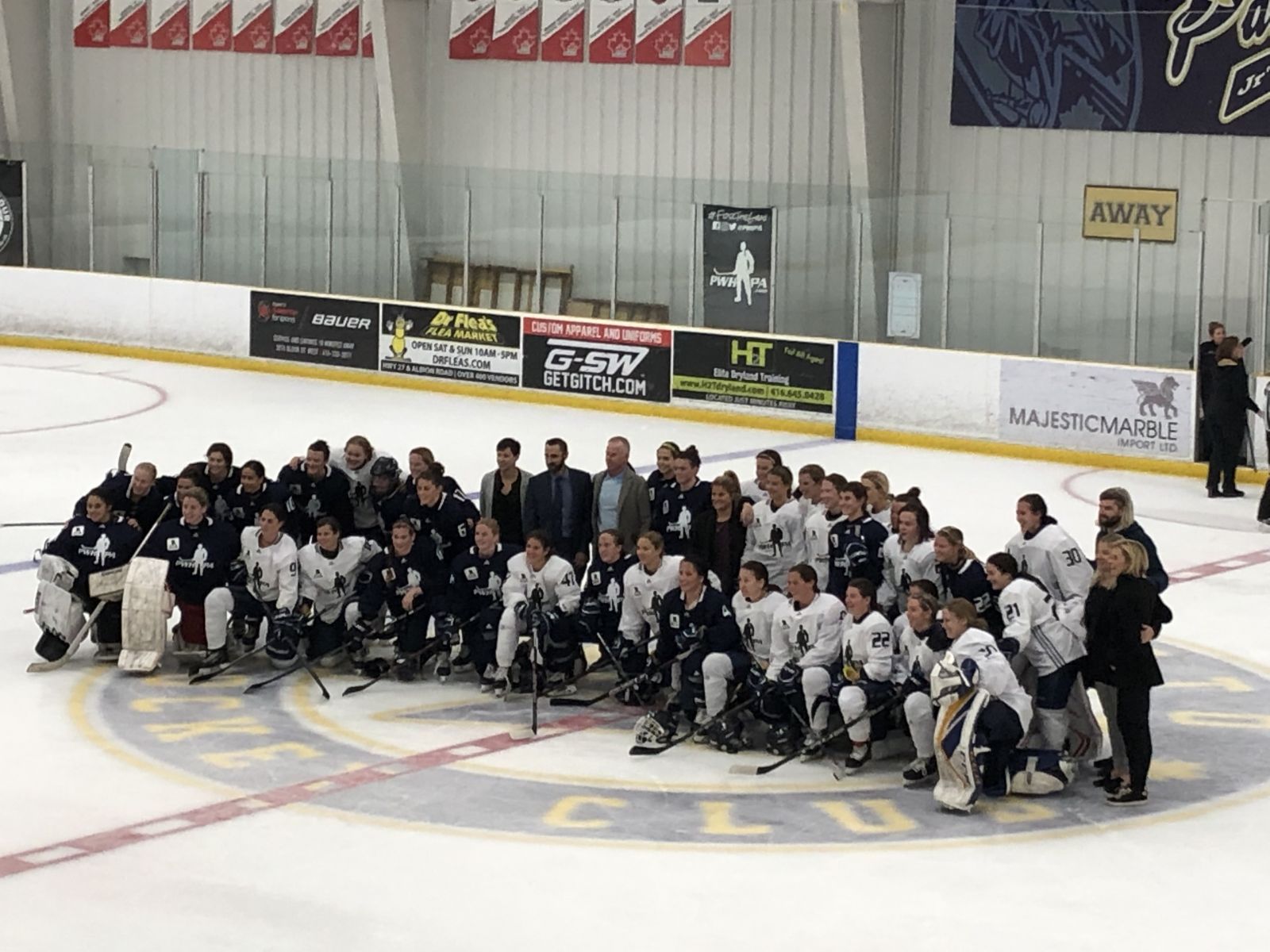 Photo courtesy of BarnBurner Advanced Media
By Brittany Ramsay
BarnBurner.ca
TORONTO. - There was barely an empty seat in the house at the Westwood Arena in Toronto, as the PWHPA (Professional Women’s Hockey Players Association) kicked off its Dream Gap Tour – a showcase of North America’s best female hockey players.
“It was a great crowd,” said Olympic Gold Medalist Rebecca Johnston.  “It was months of hard work, so to see it all come together was amazing.”
Sponsored by Unifor, the Dream Gap Tour is an initiative to showcase, promote, and support women’s hockey following the collapse of the CWHL this past Spring.
“Right now, we all have one focus, an end goal,” said Mississauga, Ontario native Nicole Kosta.
The goal Kosta is referring to – a sustainable league.  One where woman can play hockey for a suitable wage.
Not just today, but for years to come.
“The number one thing we try to be is good role models.  This might not even be for us, but for the future,” said three-time Olympian Kacey Bellamy.
Despite rivalries between Canadian and American players on the ice during international competition, these women have become a cohesive unit over the past six months.
“It’s the best rivalry, but it’s special to make history,” said Bellamy, “doing it with people you play against, but we’ve become friends and 50 years from now, we’re going to say, we started this.”
“We’re all super competitive, we want to put our best product on the ice, showcase our best,” said Oakville, Ontario native and Olympic Gold Medalist, Brianne Jenner.
Over the next four weeks, the Tour will make three stops - Toronto, Hudson, and Chicago.
“We’re doing something bigger than ourselves, it’s an incredible journey,” Bellamy added.
“I think I underestimated how special this was,” admitted Jenner, “there was a lot of passion in this building.  The cheers were for more than just a hockey game.”
More than just a game is right.
The crowd was filled with people of all ages, but most notably young girls – with their hockey jerseys on.  Competing players hugged each other after the game, came into the stands for photos and autographs - it was something special.
An event that truly welcomed everybody.
The ceremonial puck-drop included the legendary Don Cherry, along with fellow Hockey Night in Canada co-host Ron MacLean, Hometown Hockey host Tara Slone, and five-time Olympian/PWHPA Operations Consultant Jayna Hefford.
The teams even had celebrity guest coaches, such as comedian/actor Gerry Dee and Olympians Brianna Decker and Tessa Bonhomme, all of whom are true advocates for women’s hockey.
“We hope that there’s only one year of the tour,” said Jenner, “we want one sustainable North American league that includes international players and that can provide proper pay, training, etc.… we need support and investment.”
With major corporations such as Budweiser, Adidas, Bauer, and Tim Hortons as sponsors, there is hope for the future.  “If the big companies believe in us, support us, it’s going to help in the long run,” said Kosta.
“We’re not talking millions here, just a living wage, and to not be coming out in the negative after a season,” Jenner reiterated.
“Everyone is making a sacrifice to play.  Some girls (in the CWHL) were coming to the rink after long days at work,” said Kosta, who also confirmed the uncertainty factor from someone who isn’t part of the National Team. “I didn’t know what was going to happen (when the CWHL folded), so I’m excited for the opportunity to see how the game can grow and flourish.”
Jenner mentioned the grassroots initiatives, such as attending local practices for youth, and when asked what advice she had for young female hockey players, Bellamy said -
“Work hard, have fun, and always love what you do.”
PWHPACWHL Dream Gap Tour Rebecca Johnston Unifor Nicole Kosta Kacey Bellamy Brianne Jenner Don Cherry Ron MacLean Tara Slone Jayna Hefford Gerry Dee Brianna Decker Tessa Bonhomme