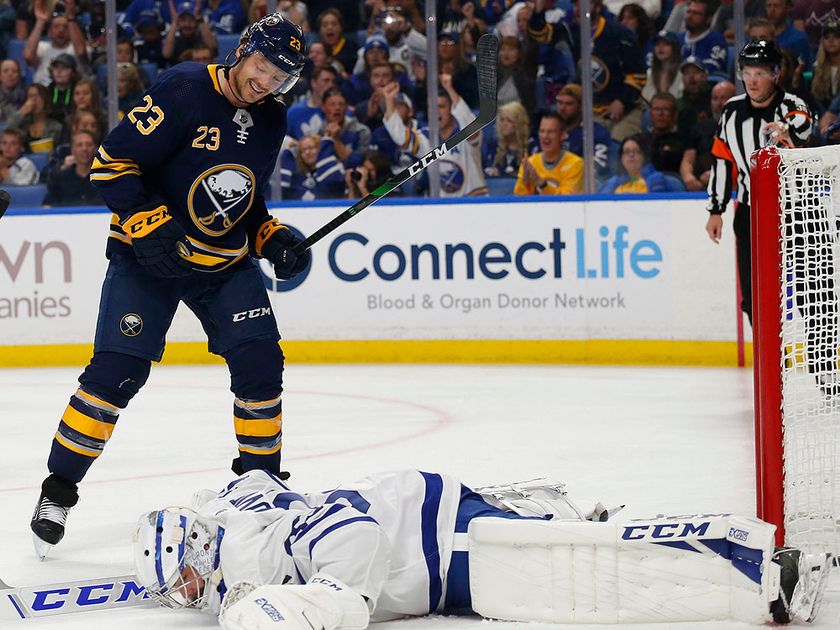 Photos courtesy of Jeffrey T. Barnes, AP
By Eduardo Harari
TORONTO. - I said it last season during the season and specially during the playoffs when the lineup consistency seems to be abandoned not only on the ice but in the strategy of line assignments.
On a night were the Leafs should have had the upper hand after a win the previous night against the same rival, it turned out to be horrible missmatch of efforts and talent. The same outcome that this team suffered from game 1 to game 2 in the playoffs against the Bruins.
The Leafs came out with a lot of fight, but what was a promising game that showed the Leafs depth and versatility, turned into a 5-3 loss and a horrible pill to swallow for the Leafs faithful.
Michal Neuvirth debut for the Maple Leafs and showed great form, stopping 20-22 in the first two periods. The offensive line of Veterans and newcommers of John Tavares, Pierre Engvall, and Trevor Moore each scored for the Leafs, keeping the score close throughout. Toronto’s incumbent fourth liners Moore, Nic Petan, and Frederik Gauthier haven't lost a step and Kasperi Kapanen was a superstar on the offense and defense.
Kapanen has been a really good defensive forward. He broke up several rush attempts at his own blue line with his positioning and stick. He created the Engvall goal and on this play, he created a 2-on-1 for himself and Tavares. For most players standing still at their own zone, this play could’ve easily just been a 1-on-1, but Kapanen is so quick with his first three strides that he can provide that advantage that can really make a difference.
Its understandable that this is the time to look at the new players that are in the organization and you need to assess if they are ready for the big club but also you need to align the existing players because they need to fall into sync with each other.
Lets not forget the criticism from the playoffs were the offensive line was making wonders on the ice but the shifts in lines on defense opened whole that could have been prevented.
Last night it was the young prospects who struggled and alowed for those wholes to be augmented. Maybe if the utilization of the veterans more often could have saved the win for the team.
The Marlies also struggled massively in the game, Engvall, Jeremy Bracco, and Adam Brooks were all lower than Harpur in terms of shot attempts and scoring chances, with Brooks ending the night 1-10.
Hudson Elynuik and Nic Petan both had much better games (and more minutes) their their linemates which might not show their contribution in the end result.
“The ‘D’ thing isn’t sorted out for me one bit, to be honest with you, more confused after the game tonight,” the Leafs coach said. “The way I look at it, (I’m) a very patient guy. We got four more (pre-season games), we just keep plugging away.
“What usually happens is guys who think they are good enough to play get better, and guys who don’t think they are good enough to play usually get worn out. We’re going to keep grinding and figure it out.”
At the end of the second period with the score tied at 2, Babcock once again gives way for Hutchinson to get some action. This being the second game that it happens and a new concern because of the result. Is Babcock really not looking at the same numbers everyone else is looking at? or is it that he already made his decision as to the backup to Andersen?
“We’re going to look at our group here, the coaching staff and (general manager) Kyle (Dubas) and get it sorted out,” Babcock said. “We have to take a step big time. We need our practices, we can be way better, put more good players together and they will be better and we can get more details done.”
Now the Leafs will have a tough task as they will play a back-back against the Montreal Canadians.
Toronto Maple Leafs MLSE NHL NHLPA Brendan Shanahan Kyle Dubas Mike Babcock Buffalo Sabres Frederik Andersen Michal Neuvirth John Tavares Pierre Engvall Trevor Moore Nic Petan Frederik Gauthier Kasperi Kapanen Jeremy Bracco Adam Brooks Hudson Elynuik Ben Harpur Michael Hutchinson Jeffrey T. Barnes AP Spanglish Sports World KBuenaRadioTV Eduardo Harari La Portada Canada