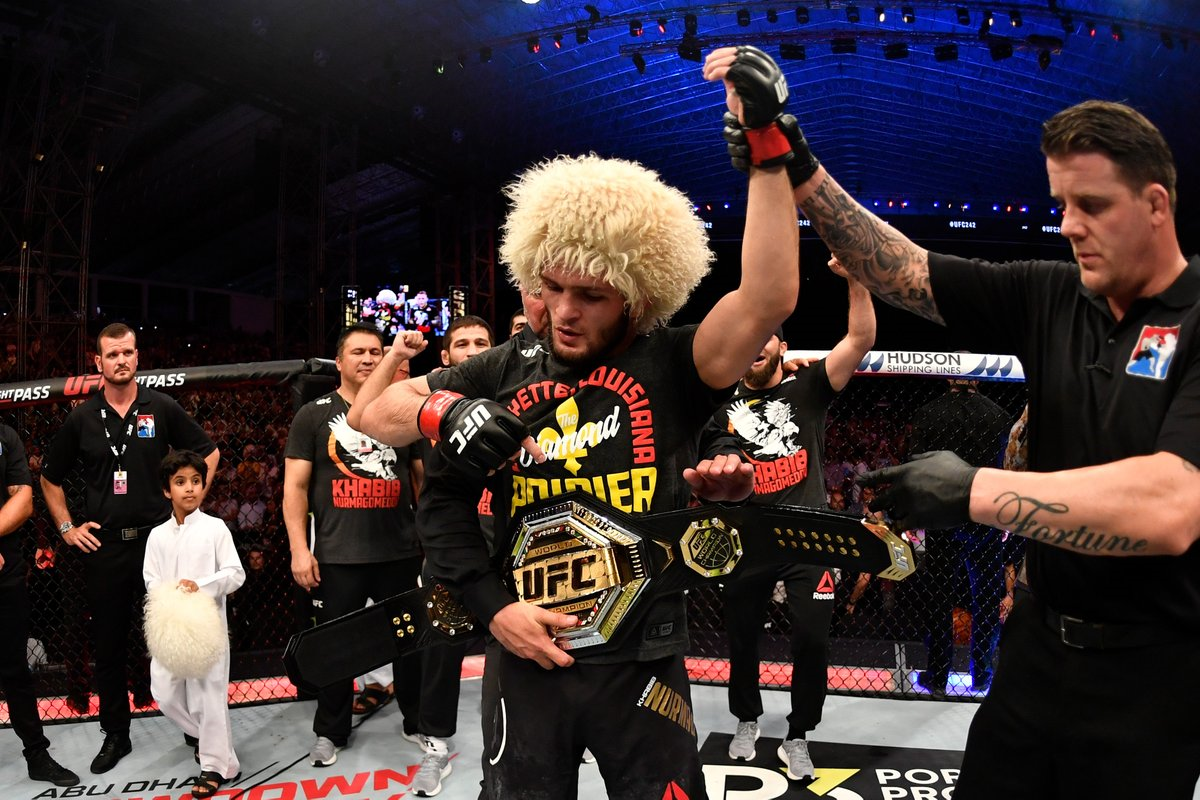 Photo and Video Credit: UFC Advanced Media
By Giancarlo Aulino
BarnBurner.ca
TORONTO. - UFC Lightweight Champion Khabib ‘The Eagle’ Nurmagomedov defeated interim-UFC Lightweight Champion Dustin ‘The Diamond’ Poirier to remain undefeated in his MMA career and unify the Lightweight championships.
It was a great performance for Nurmagomedov in his first fight in almost a year against a tough opponent in Poirier, who had been quite active in the past year. Nurmagomedov was able to use his wrestling and high-level ground game to control Poirier and submit him at 2:06 of the third round with a rear naked choke.
Poirier’s best moments came in the second round when he connected with a right hand that looked to have stunned the champion and had him in retreat mode. In the third round, Poirier managed to apply a guillotine choke on Nurmagomedov but was unable to finish the champion, who would end up regaining control and submitting him shortly after.
Following the fight, the respect between the two fighters was on full display; during the post-fight interview with Jon Anik, Nurmagomedov was seen wearing Poirier’s walkout t-shirt and announced that he’d be selling it and donating all the proceeds to Poirier’s foundation, which assist youth in New Orleans, Louisiana.
Understandably, Poirier took the loss hard in his post-fight press conference, but he had nothing to be ashamed of and it should be interesting to see what he chooses to do next as he’s defeated most of the top-5 lightweights in the division as well as reigning UFC Featherweight Champion Max Holloway, so he may decide to wait and see how the title picture plays out before accepting his next fight.
The big question looming following the fight is whether Khabib Nurmagomedov and Tony Ferguson will finally be able to fight each other. The UFC have unsuccessfully set up this fight on four separate occasions and each time, injuries and other unfortunate circumstances have led to one of the fighters being forced to pull out from the card.
Both fighters have the longest winning streaks in the UFC’s lightweight division and have yet to fight one another. The fight makes the most amount of sense in terms of the rankings however, Conor McGregor has still been campaigning for a rematch with Khabib and doubled down by sending a tweet out following the main event that he would like the rematch to take place in Moscow.
At the end of the day, the UFC is a business and a Nurmagomedov vs McGregor rematch would be a massive financial boost for the promotion if it were to take place in Russia, but the fight fans would rather see is Nurmagomedov vs Ferguson, to find out who really is the best lightweight in the world and arguably the best lightweight fighter of all-time.
UFC Khabib ‘The Eagle’ Nurmagomedov Dustin ‘The Diamond’ Poirier Jon Anik Tony Ferguson Conor McGregor UFC Advanced Media Spanglish Sports World K Buena Radio TV BarnBurner.ca Giancarlo Aulino La Portada Canada