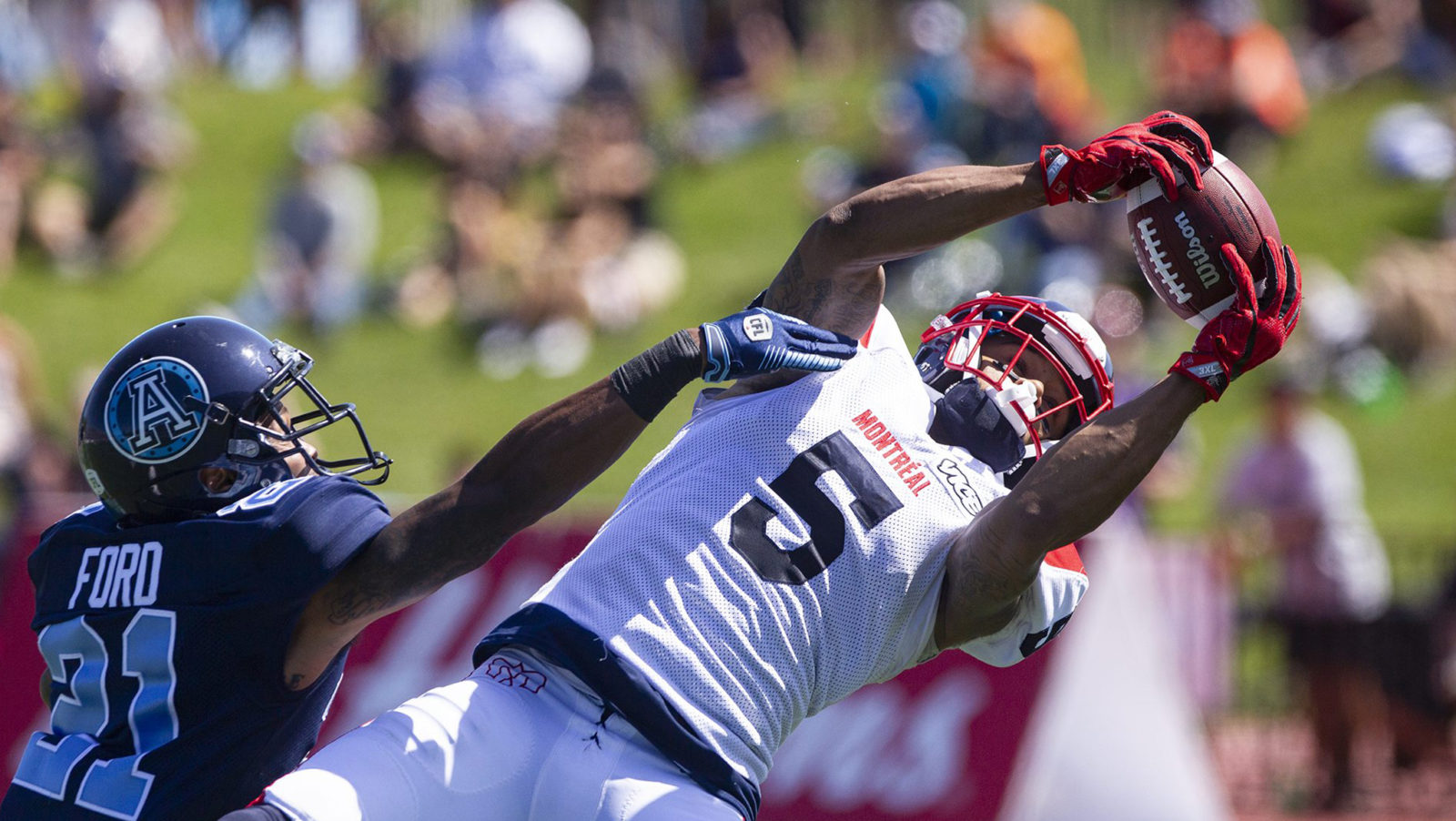 Photo courtesy of CFL Advanced Media
By Jerred Bapty
BarnBurner.ca
Montreal Alouettes 28 – Toronto Argonauts 22
MONCTON, NB – A heartbroken McLeod Bethel-Thompson walked slowly off the field after Armanti Edwards had a 5-yard pass ripped out of his hands by Montreal Alouettes defender Greg Reid on the final play of the game Sunday afternoon.
Bethel-Thompson marched the Argonauts downfield from their own 10 yardline in just 56 seconds. Receiver Rodney Smith made a 34-yard catch at the Montreal 3 yardline with 0.3 seconds left with the score 28-22 Als. And that’s where the comeback ended.
It was a beautiful afternoon in Moncton and a packed house at Croix-Bleue Medavie Stadium. A sunny, warm August afternoon, the crowd seemed somewhat pro-Alouettes despite the Argonauts wearing their home double blue.
The James Wilder Jr. saga continued when it was announced that he was scratched for Touchdown Atlantic despite appearing as a backup on the Argo depth charts on Friday.
But the show goes on.
It was a slow start to the show for both teams, with just 3 points on the board after the 1st quarter; a field goal from Tyler Crapigna for the Argonauts that rang off the inside of the goal post.
He did the same thing early in the 2nd quarter from 44 yards to extend Toronto’s lead to 6 and the Argos began to gain momentum in the 2nd.
Bethel-Thompson found Jimmy Ralph in the endzone about halfway through the quarter for his first career touchdown reception.
Crapigna hit another field goal after another 2-and-out from Montreal, but the Alouettes finally started to wake up.
After throwing an interception to Kevin Fogg in the 1st, Als QB Vernon Adams Jr. began to turn the game around in the 2nd and punched in a touchdown for Montreal to bring them within 10 points at 16-6.
Bethel-Thompson returned to the field and led a solid drive downfield that had the Argos in the red zone with 18 seconds left in the half.
A high snap resulted in a fumble recovery by Montreal’s Chris Ackie with 12 seconds remaining.
That was the turning point of the game.
Adams Jr. opened the 2nd half with a 65-yard bomb to Eugene Lewis for a touchdown that opened the flood gates for the Alouettes. Montreal continued to press throughout the 3rd quarter and completed a brilliant fake handoff pass to Quan Bray in the endzone to take the lead at 2:45 in the quarter.
The play began with a handoff to Jeremiah Johnson, who tossed it to DeVier Posey, who lateraled it back to Adams Jr. to make the throw with perfect execution.
The Argonauts didn’t go quietly into the 4th quarter with another touchdown pass caught by Derel Walker to bring Toronto back within 2.
Montreal began the 4th with the ball and was bailed out of a punt situation by a roughing the kicker call against the Argonauts that allowed their drive to continue. Johnson exploded for a 25-yard run and a touchdown.
28-22 Montreal with more than half the quarter to play.
The ball changed hands twice before Toronto began a comeback drive with 5:50 left to play. The Argonauts got to penalty help after a roughing the passer penalty was called on an interception. So, Toronto maintained possession and continued after the 3-minute warning.
Bethel-Thompson managed to get to the Montreal 34 but couldn’t hit Edwards on 3rd and 9.
Montreal suffered another 2-and-out to begin Toronto’s final - and unsuccessful - comeback drive.
Bethel-Thompson finished the afternoon with 464 yards and 2 touchdowns, completing 36 of 47 passes. A solid effort by the Argos’ pivot, aided by the receiving efforts of Rodney Smith.
He caught all 12 passes thrown to him for 136 yards, while S.J. Green was 7 for 11 and 86 yards.
Toronto’s run game was somewhat quiet, 9 carries for 46 yards for Chris Rainey and 6 touches for 37 yards for Branden Burks, but that’s because Bethel-Thompson was slinging the ball so well.
Adams Jr. went 19 for 25 with 335 yards, 2 touchdowns and the one interception. Bray was the leading receiver at 5 for 6 and 91 yards and a touchdown.
Both QBs were sacked 4 times in the game and both teams fumbled the ball once.
The Argos ultimately outplayed the Alouettes by the numbers but, from the eye test it looked like Bethel-Thompson was able to exploit Montreal’s defence when needed. Adams Jr. had bigger, more creative plays and generally looked more confident in the pocket.
Toronto falls to 1-8 and remains the lowest scoring team, meanwhile Montreal improves to 5-4 with their second bye week coming up. Toronto travels to Hamilton for the always-daunting Labour Day Classic at Tim Horton’s Field on September 2nd.
Let me know what you think!
Toronto Argos MLSE CFL CFLPA Corey Chamblin McLeod Bethel-Thompson Armanti Edwards Montreal Alouettes Greg Reid Rodney Smith Croix-Bleue Medavie Stadium James Wilder Jr. Tyler Crapigna Vernon Adams Jr. Kevin Fogg Chris Ackie Eugene Lewis Jeremiah Johnson DeVier Posey Derel Walker S.J. Green Rodney Smith Chris Rainey Branden Burks Adams Jr. Tim Horton’s Field Hamilton Tiger Cats CFL Advanced Media Jerred Bapty BarnBurner Network KBuena Radio TV La Portada Canada