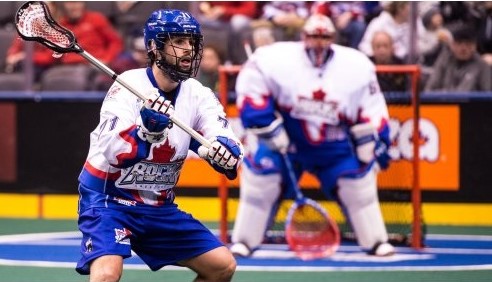 Photo courtesy of Toronto Rock Media
By Eduardo Harari
TORONTO. - The Toronto Rock opened the pre-season with a 16-11 win over the Colorado Mammoth in front of a great crowd at the Toronto Rock Athletic Centre.
The Rock came out charging and never looked back as they took a 4 -2 lead at the end of the first period and continued the attack leading 8-6 into the half and won by a margin of 5 goals 16-11.
Adam Jones returned to the Rock with renewed energy as he led the Rock with four goals.
“I was off all summer and didn’t know what to expect and after the first quarter, it sure felt like I had missed the whole summer,” joked Jones.  “It’s exhibition, but it always feels good to get on the game sheet and help your team win.”
The Rock showcased many of their new recruits like Zach Manns who demonstrated his skill set by collecting 5 points in the night with 2 goals and three assists.
Dan Dawson, Toronto’s newest addition, showed why he was acquired  by  scoring once but adding six assists in the process.
“It was a good first outing for us,” said Rock Head Coach Matt Sawyer.  “Any time you get together and play a game against some competition, you’re always looking to win so it’s good for the guys.”
Rock goaltending duties were split between Riley Hutchcraft (6 GA, 14 saves) and rookie Troy Holowchuk (5 GA, 12 saves).  Toronto outshot Colorado 47-37 on the evening.
Captain Challen Rogers scored three times, Scott Dominey, Dan Craig, Brandon Slade and Manns each had a pair of goals.  The Rock scored twice on the power play.