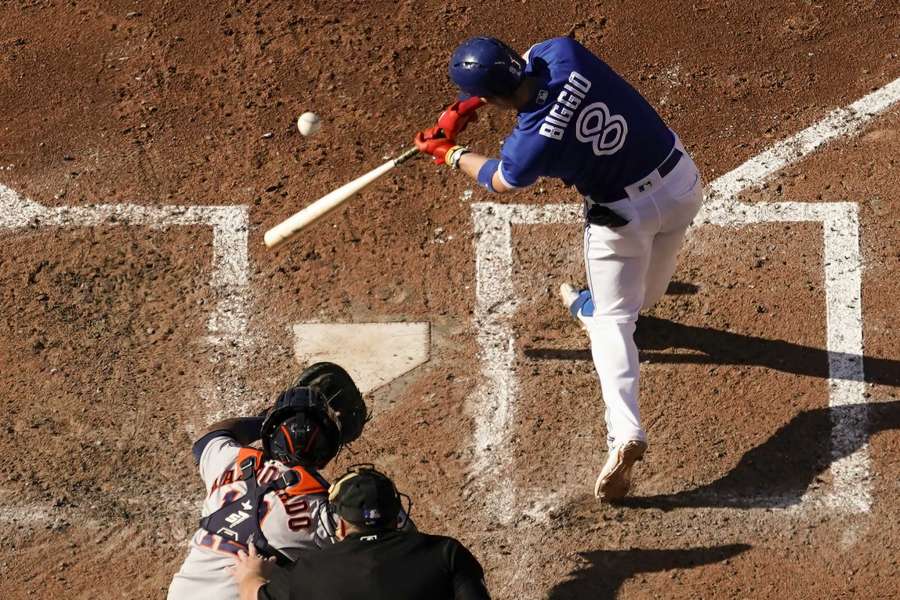 Photo courtesy of Mark Blinch, Getty Images
By Eduardo Harari
TORONTO. - In what has been a dismal and disappointing season, the Blue Jays front office still counts on their young talent to steal the show in order to hide their mistakes.
This past weekend wasn't any different after  loosing 9 of their last 11 games and continuing to follow further into the basement of the major league standings.
If Toronto manages to win 12 out of the remaining 25 games, they could theoredically finish tied with their counterpart of 1980. But tha would mean that they would have to beat the hot Braves in Atlanta, their nemesis the Rays 3 out of 6 home and away, the mighty Yankees 2 of 3 and the always dangerous Red Sox 2 of 3.
So, this brings us back to Biggio, Bichette and Guerrero continuing their all-star rookie debuts in the majors that currently has them on a tear of the record books. Biggio hit his 12th homerun of the season in the 4th inning and the second in as many nights. Bo Bichette who had a 2 /5 afternoon became the 12th player in the history of the game to have 45 hits in his 30 MLB games.  He also has 16 multi hit games in that span.
Toronto managed to stop the Astros offensive machine after leading 5 - 1 and allowing Houston to sneak back to with in two runs. It was Ken Giles that stopped his former team with a 1-2-3 ninth that shot the Springer-Altuve-Bergman threat for his 18th save in 19 opportunities.
Clay Buchholtz was the winning pitcher of the day throwing 5.2 innings allowing 2 runs on 3 hits and 5 walks  while striking out 3. Not a great performance but at this point the Jays will take anything they can.
Charlie Montoyo did mention after the game that it was a hair tearing game in which he probably aged 10 years with all the ups and downs that transpired.
Toronto Blue Jays Rogers Communications MLB MLBPA Ed Rogers Jr. Mark Shapiro Ross Atkins Charlie Montoyo Rogers Centre Vladimir Guerrero Jr. Bo Bichette Calvin Biggio Clay Buchholz Houston Astros George Springer Jose Altuve Alex Bregman New York Yankees Boston Red Sox Tampa Bay Rays Atlanta Braves Ken Giles Mark Blinch Getty Images Spanglish Sports World KBuena Radio Barn Burner Network Eduardo Harari La Portada Canada