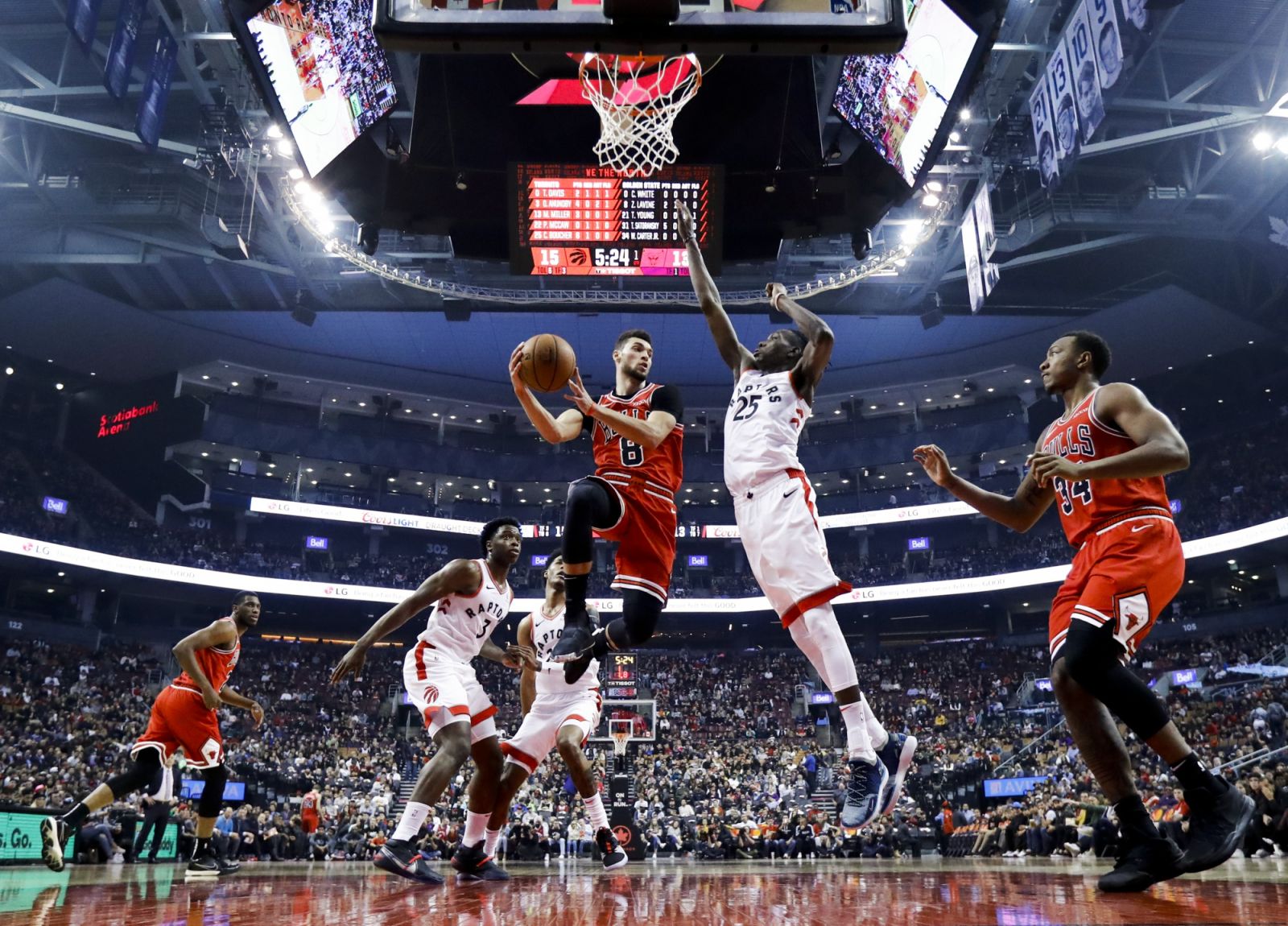 Photo courtesy of Mark Blinch, Getty Images
By Eduardo Harari
TORONTO — For Raptor Nation the return of their team to the court at Scotiabank Arena might have never happened as the defending Champions were humbled in their home turf by the injured and disorganized Chicago Bulls.
The most interesting point of the evening was the introduction of Canada’s tennis diva Bianca Andreescu who sat courtside and assisted to the comedy of night herself by remained sitting down throughout the entire introduction like it wasn't with her. She finally got up when the Raptors mascot presented her with a Raptors jersey during a timeout in the second quarter.
The other celebrity in attendance at the game was Toronto FC midfielder Jonathan Osorio who was in the MLSE private suite.
The game started well for the squad as they went on a 7 -0 run on the great play of Malcolm Miller. But that didn't last as the Bulls quickly went on a 20 - 4 run that Toronto was never able to recover from.
There was a point in the game when the play of both teams became ridiculous as the ball changed possession 13 times in on play and neither team scored at the end of the play.
Toronto, who returned from the land of the Rising Sun, rested Siakam, VanVleet, Gasol, Powell and Ibaka against the Bulls. Lowry is still awaiting medical clearance since his July thumb surgery. He is expected to increase his workload this week.
With Gasol and Ibaka on the mend, Boucher got the call at centre against Chicago. He scored 11 points and did not much of anything else at either end of the floor.
OG Anunoby led Toronto with 15 points, followed by Matt Thomas with 12.
"My big concern with him is can he rebound with the strength and size of NBA guys," Nurse said. "He let a couple get away from him tonight. The other concern is will he finish because again he can reach around with those long arms in the G-League level and there is nobody to contest him. At this level, there is more size."
The Bulls hit 18 three-point jumpers, including four apiece from Zach LaVine, Thomas Satoransky, and Coby White. LaVine led the Bulls scored 26 points.
Nick Nurse doesn't think that all the miles his Raptors have travelled during training camp will stop his players from adequately preparing for their NBA title defense.
This mini tour saw the Raptors started in Quebec City for five days, before heading to Japan for a pair of pre-season games against Houston and back to Toronto for to battle the Chicago Bulls.
"I'm not overly concerned," Nurse said. "I think you guys can see there are probably eight players for sure who will make the roster, and we're looking for a couple more who can fill into some roles, and it could be a lot of guys at this point."
The elite eight Nurse will rely on when the Raptors begin their season with their banner-raising opener against the New Orleans Pelicans on Oct. 22 include Kyle Lowry, Pascal Siakam, Fred VanVleet, Marc Gasol, Norm Powell, Serge Ibaka, OG Anunoby, and Terence Davis.
After this group, Nurse outlined the type of players he wants on his roster.
"For me, it starts with the guy who is going to execute the defensive game plan and then who is going to be a safe pair of hands on offence and who's not going to be afraid to take the kick-out shot," the Raptors coach said.
Canadian Chris Boucher remains in the mix. The six-foot-10, 200-pound Montreal native was asked at the beginning of training camp to switch from centre to power forward.
The adjustment hasn't been easy. But the 26-year-old Boucher has a week to improve.
"It's a process, trying to figure out how I can change my game," Boucher said, adding his most significant challenges has been making reads off his teammates and knowing when to set screen.
"I want to fix the little things. Coach has told me to focus on defense, and that's what I'm trying to focus on the most. I need to rebound more than anything, even though I'm trying to block shots."
As far as Dewan Hernandez goes it seems that he is in a learning curve that might take a little of time. He needs to learn his positioning and adapt to the NBA level of movement.
Nurse mentioned that "Dewan is a better finisher than what he did tonight, he is very crafty finding that niche area 6 - 8 feet from the basket and putting up those shots."
As far as him making the roster Nurse said "I project him to be a January - February guy so will send him down to the G-League and get him some more experience under his belt and maybe move him back and forth a little bit and get him ready to help us halfway through the season."
By the way at the end of the night the Raptors lost the game by 14, 105 – 91, in front of the 16,436 fans that watched what looked like a pickup game in a New York playing ground.
Toronto will play its final pre-season game in Brooklyn on Friday before their season opener at home against the New Orleans Pelicans on Oct. 22.
Toronto Raptors Scotiabank Arena MLSE NBA NBPA Masai Ujiri Bobby Webster Nick Nurse Chicago Bulls Bianca Andreescu Jonathan Osorio Kyle Lowry Marc Gasol Serge Ibaka Norman Powell Fred VanVleet Chris Boucher Pascal Siakam OG Anunoby Terence Davis Oshae Brissett Malcolm Miller Zach LaVine Coby White Lauri Markkanen Otto Porter Jr. Thad Young Brooklyn Nets New Orleans Pelicans Mark Blinch Getty Images Spanglish Sports World BarnBurner.ca KBuena Radio TV Eduardo Harari La Portada Canada