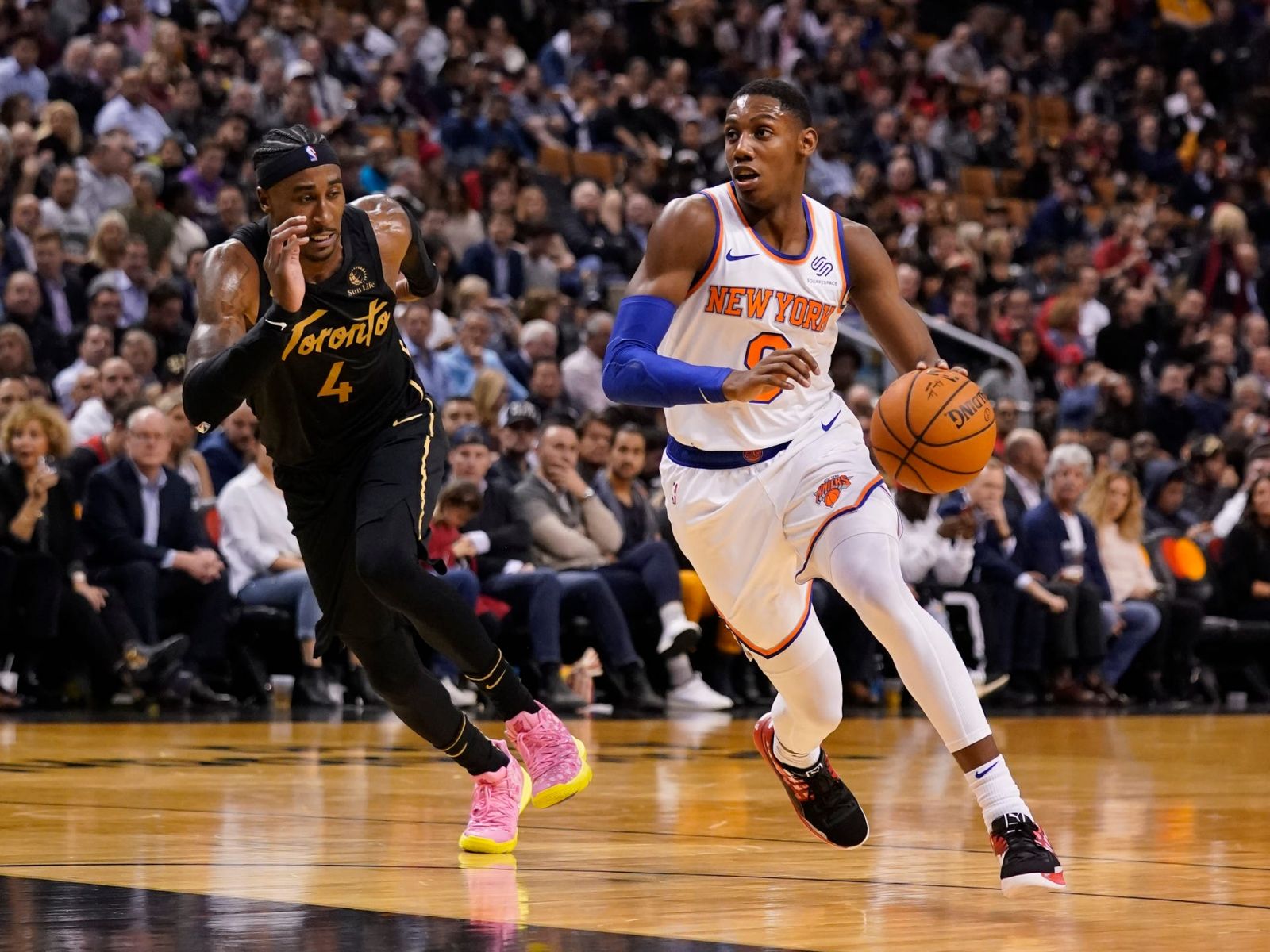 Photo courtesy of John E. Sokolowski, USA TODAY Sports
By Eduardo Harari
TORONTO. – Its not often that a Canadian athlete gets the attention of the world media when he makes his debut at home, but this wasn’t an ordinary night or an ordinary athlete. On this night it was the home coming of Canada’s most formidable basketball star and the 3rd overall pick in the NBA draft by the New York Knicks, R.J. Barrett.
Not since Steve Nash graced the courts of the NBA, has a Canadian player brought so much hype to the Canadian basketball program and scene. So, for the 300 plus friends and family that attended the game amongst the sold out crowd of 19,800 at the Scotiabank Arena, it was the realization of a dream becoming a reality.
Barrett had announced at the previous days practice that he had a surprise for his hometown crowd and country for all the support that he had been provided over the years by all.
“I’m wearing a little something for them tomorrow on the court. That’ll be exciting. I can’t tell you nothing. Just know that it will be a little something. It means a lot. I feel like everybody kind of feels something for where they grew up or where they came from and for me, Canada, the whole country, has my back and I love them for that.” 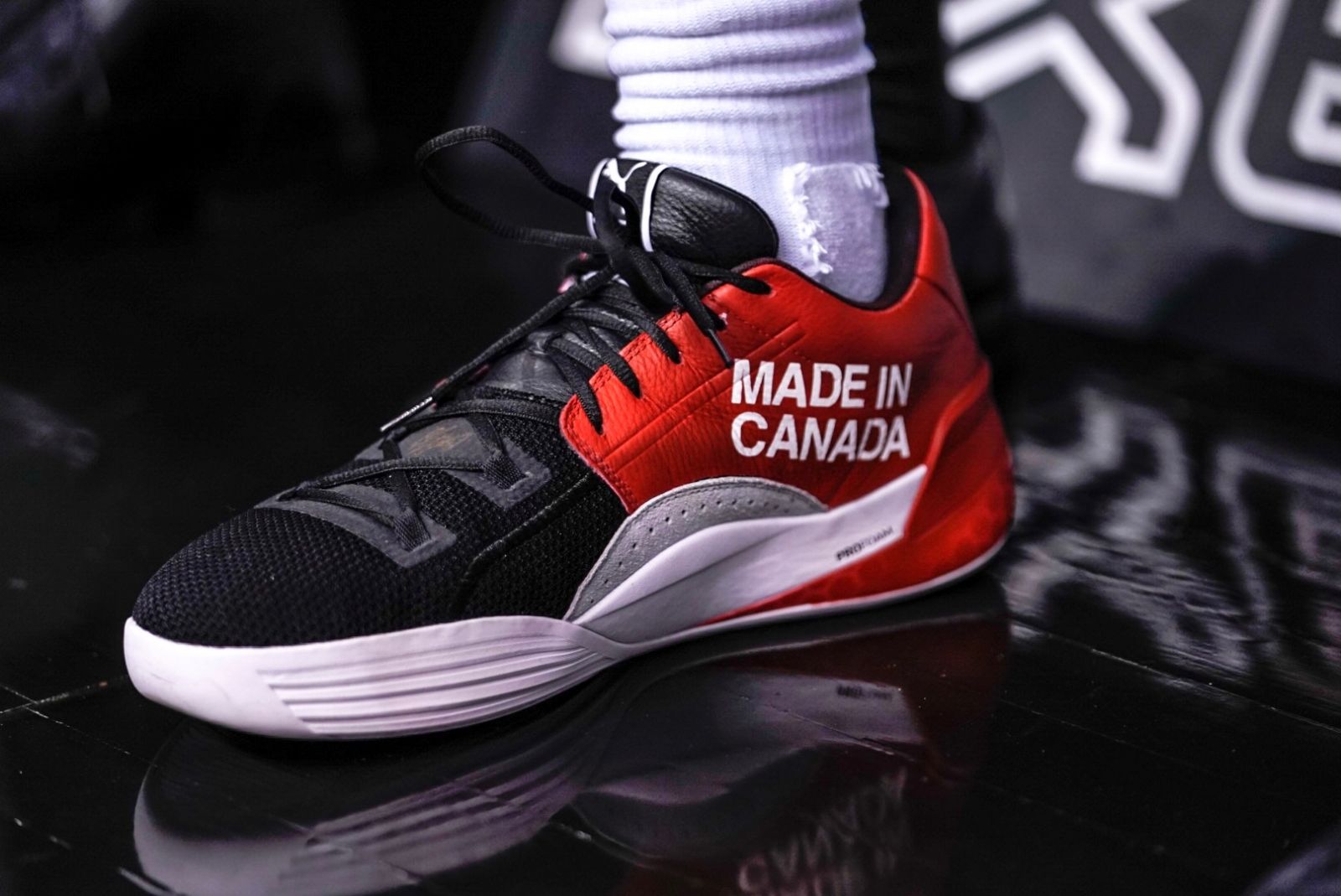 Photo courtesy of NY Knicks Twitter
Knicks rookie RJ Barrett, from Mississauga, Ont., announced that he would play for Canada at the Olympic qualifying tournament this summer in Victoria. He wore customized red sneakers that read "Made in Canada" on the sides for the game against the Raptors.
It was unclear if Barrett would be playing as he had been ill which forced him to sit out the previous game against the Brooklyn Nets.
"For me, I’m very excited," Barrett said after the Knicks' shootaround Wednesday morning. "It’s basketball. It’s a game. Got to go play free and have fun."
The Raptors gave him a nice welcome. 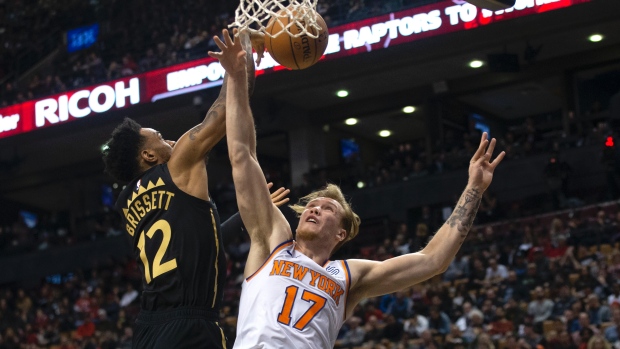 Photo courtesy of CP
During the first quarter, they showed both Barrett and Ignas Brazdeikis, who also lived in Canada growing up, on the video board as the public address announcer welcomed them back to the country and said, "Canada is proud of you!"
Barrett grew up going to Scotiabank Arena to watch the Raptors with his father, Rowan, who played college basketball at St. John's University.
RJ Barrett's Toronto homecoming didn't go the way he may have hoped, as the Knicks suffered their 4th consecutive to the Raptors 126-98 this night, but there's plenty the rookie can learn from his return to his hometown.
"They're tough. First unit, second unit, third unit, they all play the same way," Barrett told reporters after the game. "They play tough, with great, and everybody moves the ball and shares the ball. They don't care who scores. It was good to go up against a team like that.
"They played hard the whole game." 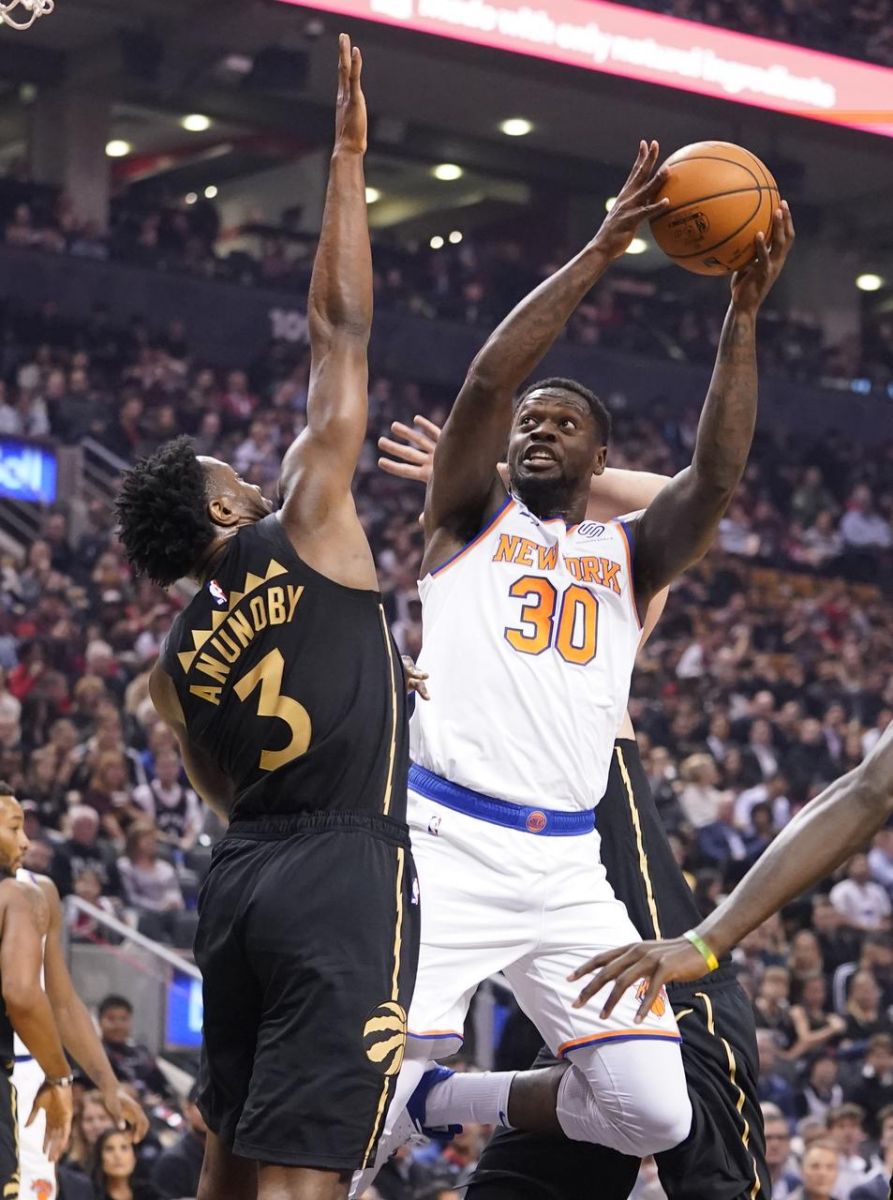 Photo courtesy of John E. Sokolowski, USA TODAY Sports
The Knicks and Barrett out played the Raptors in the first quarter as they took a 29-21 lead on a 11-point performance from Julius Randle.
But the Raptors answered back, as NBA Champions from “The North” tend to do, outscoring the Knicks 105-69 over the final three quarters, led by 31 points from Pascal Siakam.
"I feel like every time you guys tell me I did something well, the next game I go like 0 for 8 or something like that. So, thank you for that," joked Siakam. "I’m just continuing to work hard. Shooting’s a part of my game that I continue to work on." 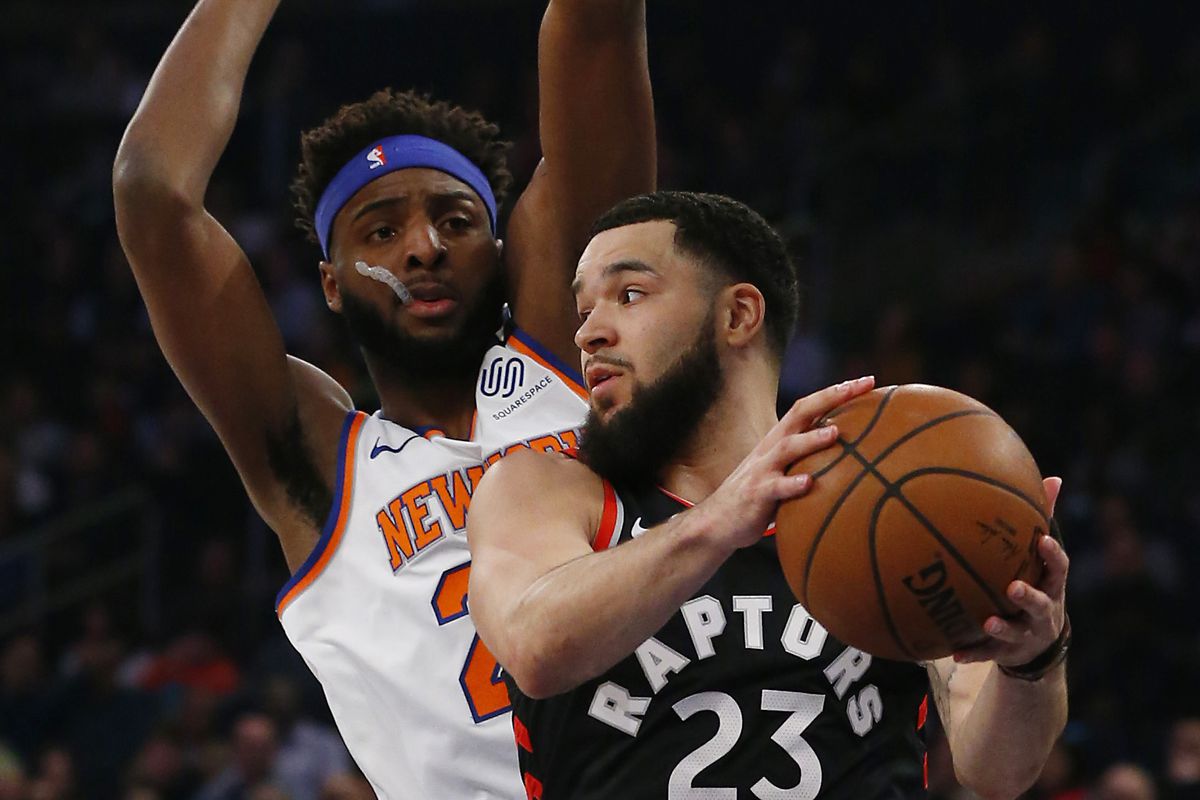 Photo courtesy of Noah K. Murray-USA TODAY Sports
Fred VanVleet added 15 points with four assists and three rebounds as the Raptors (13-4) improved to 8-0 at home on the season, a franchise record.
An 11-3 Raptors run to start the second quarter was capped by Rondae Hollis-Jefferson’s putback of a rebound. He made a free throw to tie the game.
Siakam’s driving layup on Toronto’s next possession made it 34-32 with 8:18 left to play in the second. Toronto continued to dominate play in the quarter, taking a 58-46 lead into halftime.
Toronto outscored New York by 20 in the second quarter to put the game out of reach.
"We started lackadaisical a bit and then figured it out end of the first, start of the second and that’s all you look for," said VanVleet. "Just try to keep getting better and take each win where you can get it."
Siakam tied his career-high for three-pointers with a jump shot to make it 81-57 with 4:40 remaining in the third. He matched his three-point performance from a 122-104 rout in New Orleans on Nov. 8 when he also had a career-best 44 points.
Nurse turned to his bench in the fourth quarter, and the Raptors extended their lead by as many as 34 points.
While I’m not ready to suggest the Raptors’ rebounding woes are completely behind them, it was fun to see them hit the glass so hard last night. Yes, it’s only the Knicks, but one thing the Knicks do have is size, so it was a positive to see Toronto end up a +7 on the glass. Chris Boucher told us post-game that Nick Nurse had stressed rebounding as a key to last night’s game, and that “everybody came in with a lot of energy and tried to give as much to defensive rebounding as we could.” 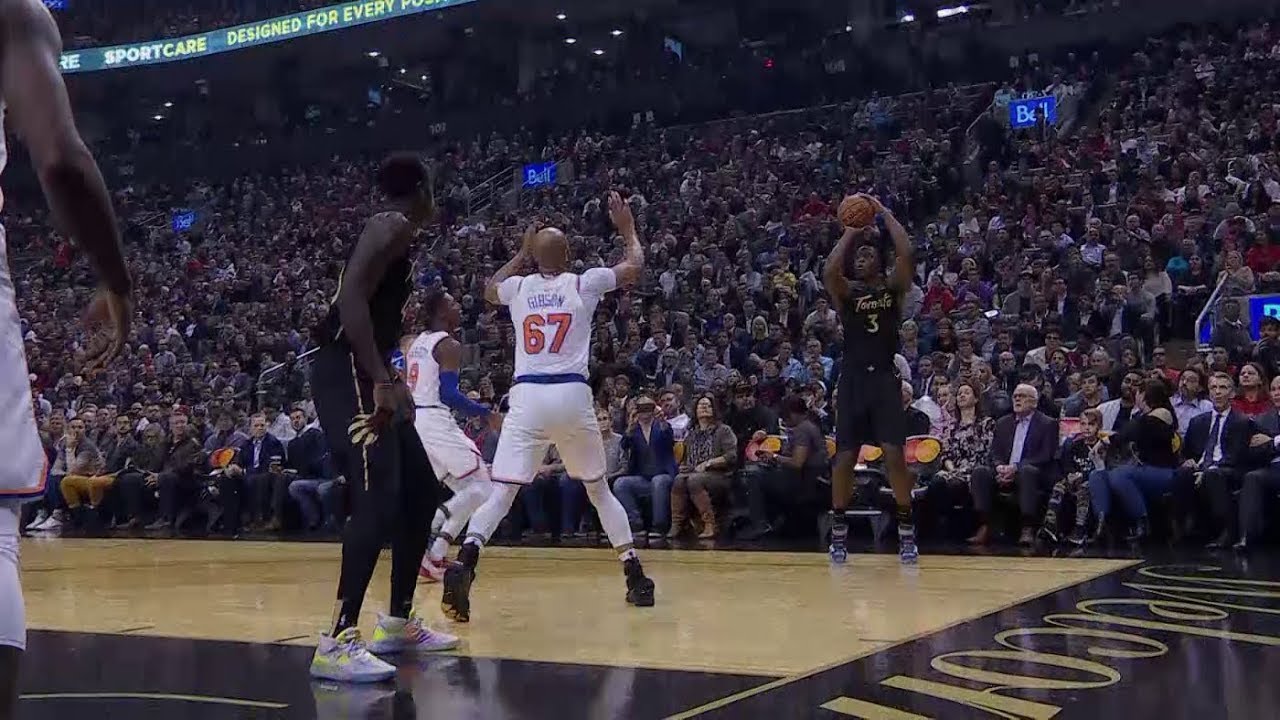 Photo courtesy of TSN
On the other end, the bench unit of Boucher, Terence Davis and Rondae Hollis-Jefferson were once again chaos-providers on the offensive boards. On a fun sequence at the end of the first quarter, Boucher hauled in an offensive rebound off an OG Anunoby miss but missed his tip-in attempt — only for Hollis-Jefferson to secure it and kick it out to Terence Davis for three. Davis missed his three-point attempt, but followed his own shot, collected the rebound and laid it in.
OG Anunoby had his first career double-double, scoring 13 and pulling down 12 rebounds for Toronto, which sat its starters for the fourth quarter.
Nurse spoke about Anunoby’s rebounding post-game, saying “that’s something they’ve been working on this season, especially since their offensive rebounding rate has been particularly low — indicating that thanks to Anunoby’s size and speed”, “he can fly in there and use his athleticism to keep some alive.”
Toronto made 51.2 per cent of its three-point attempts, with the Raptors’ 21 threes tying the franchise’s single-game record. 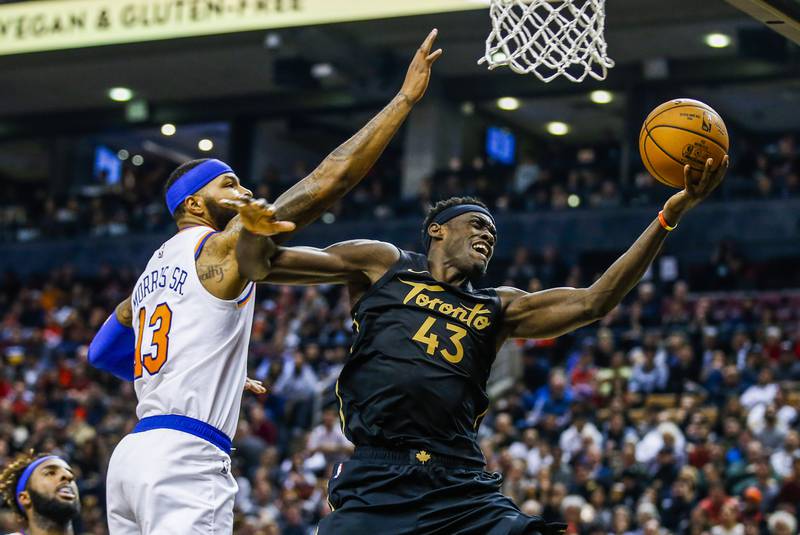 Photo courtesy of Doroszuk, Toronto Sun, Postmedia
Toronto head coach Nick Nurse believes that the 25-year-old Siakam will reach his true potential as an NBA player in the next 18 months.
"Maybe I’m wrong. He seems to cut all my timelines in about half or, you know, more than that sometimes," said Nurse. "But I keep saying this, when he went to work on it, he went to work on it."
Nurse explained how early in Siakam’s career the Raptors had him work on his shooting for at least an hour every day, taking 450 shots in solo sessions. After a few days of these specialized drills Siakam decided to double the volume of shots.
"It’s always something I’ve been able to do to make sure I work on my craft every single day, understanding I’m always late," said Siakam, who began playing basketball when he was 17. "That’s my mindset — I have to find a way to catch up to all the people that started playing when they were like five years old."
Toronto Raptors MLSE NBA NBAPA Larry Tenenbaum Masai Ujiri Wayne Emby Bobby Webster Dan Tolzman Nick Nurse OG Anunoby Chris Boucher Oshae Brissett Terence Davis Marc Gasol Dewan Hernandez Rondae Hollis-Jefferson Serge Ibaka Stanley Johnson Kyle Lowry Patrick McCaw Malcolm Miller Shamorie Ponds Norman Powell Pascal Siakam Matt Thomas Fred Van Vleet John E. Sokolowski Noah K. Murray USA TODAY Sports NY Knicks Twitter CP TSN Doroszuk Toronto Sun Postmedia BarnBurner.ca KBuenaRadio.TV Spanglish Sports World Eduardo Harari La Portada