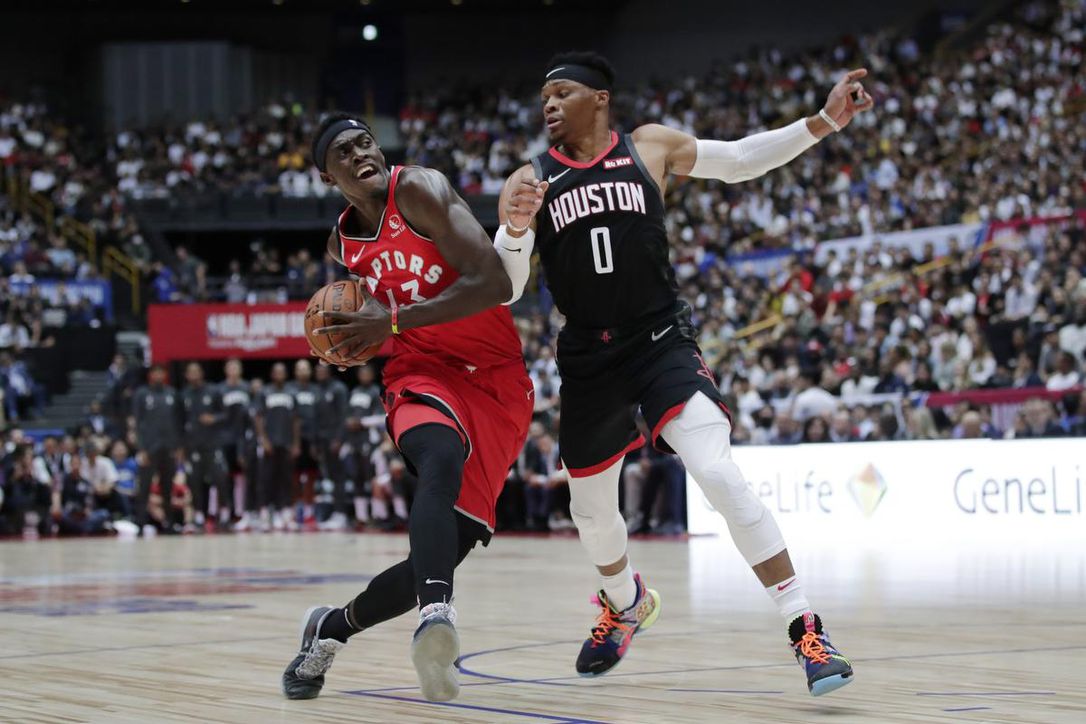 Photo courtesy of Jae C. Hong, The Associated Press
By Eduardo Harari
TORONTO. - Raptor Nation is leaping with joy this morning as their defending NBA Champions are finally back home after a long summer of frustrations and disappointments.
The team returns home after splitting their two-game series in Japan against Houston, which worked out to be a great showcase of what's to come from the new recruits and the already established veterans.
The two games showed that this team is ready in some levels to compete against the newly star stacked teams of the Western Conference and the rivals of the east.
The Raptors battled the tandem of Russell Westbrook and James Harden and managed to control their pace and scoring with a squad without Kyle Lowry and a so-so Marc Gasol after a long and rigorous battle at the World Championships.
Toronto also battled a shift in times as instead of playing in regular time scheduled their bodies had to adapt to playing at 6 A.M. instead of 6 P.M., so today will be a welcomed change and familiar sorounding at Scotiabank Arena since their last game of the NBA Championship run.
The Raptors will have to deal without the services of Kyle Lowry as he is still wainting to get medically cleared from his July wrist surgery. Furthermore, Marc Gasol will sit out this game for some well deserved rest to get him ready for the season.
The Raptors welcome this evening the 0-3 Chicago Bulls who are battling a series of hamstring injuries.
The retuning veterans seem to be poised and ready to play for another championship ring. Serge Ibaka returned with a new surge of confidence and has dominated the preseason averaging 15 points on 68% shooting from the field while running superbly in transition and upgrading his outrageous defense. Gasol is always a threat on both sides of the floor and provides an added weapon whenever he enters action. Norman Powell has been a great surprise from deep as he is now at 7 / 10 in the preseason. Fred VanVleet's improved passing game is an added bonus to his energetic play and is averaging 7.5 assists per game. Chris Boucher will become a scoring machine when he sees action. And definitely last but not the least Pascal Siakam will be a factor this season as he has started to write his statement of worth by acquiring 20 points, 9 rebounds, 4 assists, 1.5 steals and .5 blocks in a miniscule 24.4 minutes of playing time.
Now let’s analyze the young and vibrant supporting cast that will fill the gaps in this NBA title defending season. OG Anunoby’s defense remains terrific and a suitable option on either side. Newly acquired Terence Davis will a stabilizing force for the Raptors on either end and hopefully his scoring will come. Oshae Brissett has been brilliant on the defensive end. Malcom Miller made great strides in his game and looks more solid finishing plays and in the passing game.
The major questions to watch in tonight’s contest are Can Powell continue his stride from deep as well as can he become an improved passer? Can Davis free himself long enough to take more quality shots? Can OG become the player the Raptors need to create opportunities down the lane? Can the other talented new recruits show up with new and unexpected plays to prove their worth?
Lets not forget the power of the Bulls that although might be hurting but are stacked with young talent that might surprise at any point. Zack LaVine has been a consistent force in the preseason so far. Coby White has proved that his nifty change of pace on the dribble can disturb any defense and his scoring is vastly improved. Lauri Markkanen, Otto porter Jr., and Thad Young have responded to the challenge.
Game Info
Tipoff: 6:00 pm EST | TV: TSN | Radio: TSN 1050
Projected Raptors Lineup
PG: Fred VanVleet, Cameron Payne, Isaiah Taylor
SG: Norman Powell, Patrick McCaw, Terence Davis II, Matt Thomas
SF: OG Anunoby, Stanley Johnson, Malcolm Miller, Oshae Brissett,
PF: Pascal Siakam, Rondae Hollis-Jefferson, Chris Boucher, Devin Robinson
C: Marc Gasol, Serge Ibaka, Dewan Hernandez
Projected Bulls Lineup
PG: Kris Dunn, Tomas Satoranksy, Coby White, Perrion Callandret
SG: Zach LaVine, Denzel Valentine, Adam Mokoka, Justin Simon
SF: Otto Porter, Chandler Hutchison, Milton Doyle
PF: Lauri Markkanen, Thad Young, Simisola Shittu
C: Luke Kornet, Daniel Gafford, Christiano Felicio
Toronto Raptors MLSE NBA NBPA Masai Ujiri Bobby Webster Nick Nurse Houston Rockets James Harden Russell Westbrook Kyle Lowry Marc Gasol Chicago Bulls Serge Ibaka Norman Powell Fred VanVleet Chris Boucher Pascal Siakam OG Anunoby Terence Davis Oshae Brissett Malcolm Miller Zach LaVine Coby White Lauri Markkanen Otto Porter Jr. Thad Young Jae C. Hong The Associated Press Spanglish Sports World BarnBurner.ca KBuena Radio TV Eduardo Harari La Portada Canada