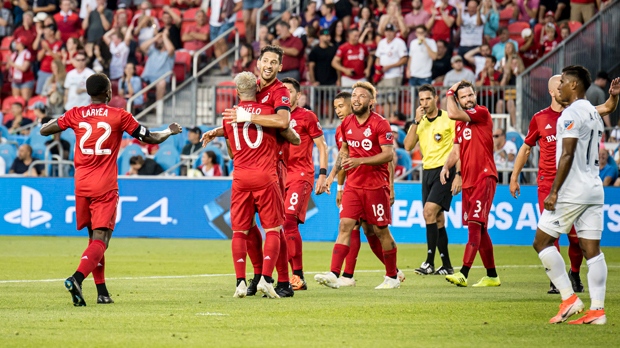 Photo courtesy of Christopher Katsarov, The Canadian Press
By Eduardo Harari
TORONTO. – On a muggy summer evening next to Lake Ontario, the Toronto FC welcomed FC Cincinnati who are the holders of the last place in the Eastern Conference. The 25,000 plus fans who made their way to BMO Field were witness to something Reds fans have been waiting for.
The Reds were running up and down the field with ease and extreme confidence. From the start they started moving 4-2-3-1 formation assigned by their coach Greg Vanney. The first goal was truly a show of skill as Omar Gonzalez and Alejandro Pozuelo moved down the side of the field while Nick DeLeon quickly position himself in the middle of the box prepared to receive the cross from his teammates.
As they sled into the middle of the box Gonzalez tapped with his back heal a silent cue ball that De Leon placed past Przemyslaw Tyton in the 16th minute for what would be the Reds first goal of the evening.
DeLeon called the loss to Houston "a good wakeup call."
"It was nice to have a full week of training without a midweek game to kind of get everybody on the same page," he said.
The first half came to an end and the numbers showed that the Reds held a 60 – 40 differentials in the possession of the ball and the shots on goal favored them as well by an 8 – 1 ratio.
Vanney was happy with the result but thought his team, which finished with just three shots on target in total, could have made it easier on itself.
"You won't see a lot of switching as we start to play week-to-week. There won't be a lot of interchange of guys," he said.
"We should have taken more out of the first half," he said.
As the second half opened Cincinnati started to push the pace of the game trying to break through the defensive arsenal of Toronto. In one of their attempts the ball was intercepted by Drew Moor, who quickly moved the ball the far side connecting with Nick De Leon that crossed the ball to a free Jozy Altidore. He scrambled with the ball and with out prejudice fired a torpedo to the upper right corner of the net giving Toronto FC their second and winning goal of the match in the 50th minute of the match.
From that moment on the Reds concentrated on stopping the offensive counterattack of their opponents until by a string of luck what looked like a easy clearing play ended in the foot of Emanuel Ledezma who placed the ball passed Quentin Westberg for the only goal of FC Cincinnati.
The team definitely looked more poised with Pozuelo in the midfield shifting the ball to either side of the field. Bradley looked less fatigued as Pozuelo was being double and tripled covered at times. It seems that most of the league has decided that he is as good as the stories were told.
"Things are getting really tight and every point is vital," said captain Michael Bradley.
Newly signed Venezuelan winger Erickson Gallardo will have to wait for his TFC debut. Listed as questionable with a quad strain, he did not dress.
The Reds now head to New York to face the Red Bulls who hope they have better luck at home after their loss 3 – 1 loss to Toronto 2 weeks ago at BMO Field.
The Reds will be back at home next on Aug 10, when they will play Orlando City SC.
Toronto FC Bill Manning Ali Curtis Greg Vanney Alejandro Pozuelo FC Cincinnati Houston Dynamo New York Red Bulls Orlando City SC Jozy Altidore Omar Gonzalez Michael Bradley Quentin Westberg Nick DeLeon Drew Moor Przemysław Tytoń Emanuel Ledezma BMO Field Christopher Katsarov The Canadian Press Spanglish Sports World KBuena Radio Barn Burner Network Eduardo Harari La Portada Canada