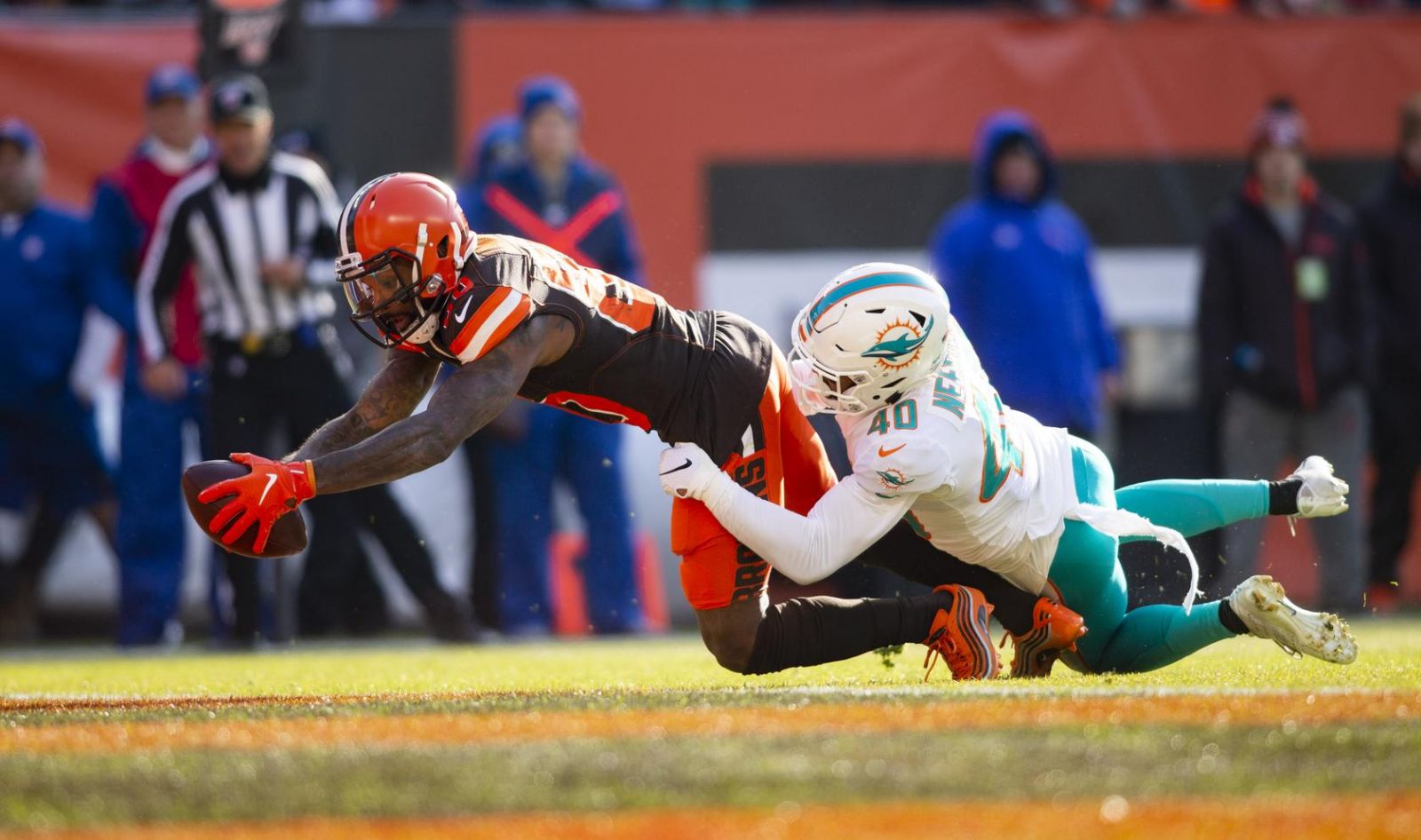 Photo courtesy of Scott R. Galvin, USA TODAY Sports
By Jake Carter – BarnBurner.ca
TORONTO. – This was really a difficult week in the NFL as must of the teams did not cover the expectations of the analysts with very tight games all around.
Miami vs. Cleveland
In their first game without Myles Garrett, Cleveland’s offense came through. Jarvis Landry caught two touchdown passes against his former team, and Cleveland won their third straight game, 41-24. Baker Mayfield had 327 passing yards and three touchdowns in the victory.
Detroit vs. Washington
This one came down to the wire, all tied up at 13-13 heading into the fourth quarter. Following a Washington interception, Dustin Hopkins kicked a 39-yard field goal as the Redskins snapped a four-game losing streak with a 19-16 win.
Seattle vs. Philadelphia
Photo courtesy of Michael Perez, AP
The Seahawks remain undefeated on the road after a 17-9 victory over the Eagles. Running back Rashad Penny ran for a career-best 129 yards, including a 58-yard touchdown. Carson Wentz threw for one touchdown but was responsible for four turnovers.
Oakland vs. New York Jets
This game wasn’t even close, with the Jets scoring 21 points in the third quarter to run away with it. Quarterback Sam Darnold threw for two touchdowns and ran for another score to lead the Jets to a 34-3 win.
Carolina vs. New Orleans
This was another nail-biter, with the game coming down the final few seconds. Saints kicker Wil Lutz hit a 33-yard field goal as time expired to lift the Saints to a 34-31 victory over the Panthers.
Denver vs. Buffalo
Photo courtesy of Jamie Germano, Rochester Democrat & Chronicle
The Bills had four sacks and limited the Broncos to a lone field goal with a 20-3 victory. Buffalo, at 8-3, is off to its best start in 23 years since Hall of Fame quarterback Jim Kelly’s final season.
Pittsburgh vs. Cincinnati
Steelers quarterback Devlin Hodges took over for a struggling Mason Rudolph in the fourth quarter and threw a 79-yard touchdown pass to propel Pittsburgh to the 16-10 win. The Bengals remain the only winless team in the NFL.
New York Giants vs. Chicago
The Giants continued to struggle, as they allowed 16 points in the third quarter and couldn’t come back in a 19-14 loss. Khalil Mack had three tackles including a sack. New York has now lost seven games in a row.
Tampa Bay vs. Atlanta
Photo courtesy of NFL.com
After trailing 10-7 after the first quarter, the Buccaneers outscored the Falcons 28-12 the rest of the way resulting in a 35-22 win. Jameis Winston threw three touchdowns, including one to 6’4”, 347 lb. defensive lineman Vita Vea for his first career TD.
Jacksonville vs. Tennessee
After taking a 7-3 lead into the second quarter, the Titans’ offence exploded. Tennessee scored four touchdowns on six offensive plays during the third quarter and improved to 6-5 with a 42-20 victory.
Dallas vs. New England
The Patriots’ defence was stellar, holding the number-one ranked Cowboys’ offence without a touchdown for the first time this season. Dallas couldn’t score on their final drive of the game, and the Patriots defeated the Cowboys 13-9.
Green Bay vs. San Francisco
Photo Courtesy of Jose Carlos Fajardo, Bay Area News Group
The Niners’ defence was back to its dominant form. They only allowed 198 yards and didn’t allow a single completion longer than 15 yards. They defeated Green Bay 37-8, improving to 10-1, and remain ahead of Seattle (9-2) in the NFC West.