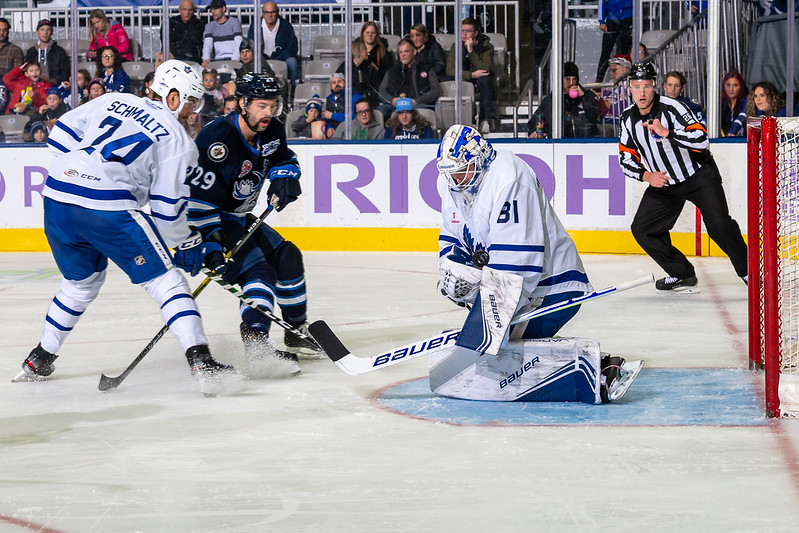 Photo courtesy of Christian Bonin, TSGphoto.com
By Harley Kock – BarnBurner.ca
TORONTO. - A 4-0 series sweep, a franchise best 9 game home winning streak and first in the North Division on the line. The Toronto Marlies knew what was at stake and delivered beating the Manitoba Moose 4-1.
Toronto’s Joseph Woll got the start in net and was tested early with a long shot from the blueline that he easily gloved.
"I think it kind of starts in practice. I think having the same mentality in practice as in a game. You know every time I'm on the ice, I have the same mindset." He remarked postgame.
Marlies first great chance came two minutes later from Darren Archibald, he shot one from the sideboards that Mikhail Berdin could barely see, but he made a good positional save.
Photo courtesy of Christian Bonin, TSGphoto.com
Several big hits early set the tone for the fourth and final matchup between Toronto and Manitoba this season.
A rocking crowd at the Coca Cola Coliseum were then treated to a show from Woll. He made back-to-back huge saves before diving to hold his post, keeping it 0-0 through the first few minutes.
At 7:44 came the Marlies first powerplay, Manitoba’s Sami Niku got two for hooking. On the man advantage, Toronto couldn’t muster much in-zone time.
Halfway through the period Toronto turned it over in the neutral zone, Brent Pedersen was out on a breakaway but a stretch by Woll’s left pad kept the score even.
Toronto was pinned in their own end early in the second. Adam Brooks was launched on a partial break, but Berdin made a solid pad save.
Then Timothy Liljegren took a slashing penalty. On the Moose powerplay, Jansen Harkins from behind the net passed out front to JC Lipon, he put it just over the crossbar, keeping the game scoreless.
Photo courtesy of Christian Bonin, TSGphoto.com
A few minutes later, a Give-and-go on the blueline from Adam Brooks to Jeremy Bracco was tipped by Kenny Agostino passed Berdin for the first goal of the contest. Agostino's Marlie leading 10th goal of the season.
This time Pontus Aberg cross crease to Tanner MacMaster who directed it in, giving the Marlies a 2-0 lead. MacMaster extended his point streak to six games.
MacMaster then took a hooking penalty. The Moose went on their second powerplay of the game with 5:40 left in the second period. Toronto's Brooks was gifted a breakaway following a neutral zone turnover, Berdin made a fantastic save keeping it a 2-goal deficit for Manitoba.
In the dying seconds Garret Wilson was wide open out-front and tried a backhand-forehand move, Berdin did the splits sending it to the third 2-0 Marlies.
Toronto was on the penalty kill almost immediately starting the final 20 after Pontus Aberg was called for a hold. Harkins took the pass from Andrei Chibisov and ripped it from the left circle short side, beating Woll to the post. In Woll’s effort to get there he knocked off the net, there was some discussion between the referees before the goal counted.
Photo courtesy of Thomas Skrlj
The gloves were dropped between Harkins and Rasmus Sandin. Result was four on four hockey as both were giving two for roughing as it was broken up quickly. Nothing came from the extra ice.
With 3:27 left Toronto went on the powerplay, The Marlies scored .38 seconds into the man advantage, an attempted clear was kept in by Kenny Agostino and passed to Aberg who found the mesh for a 3-1 lead.
Photo courtesy of Toronto Marlies Media
"I think our guys take a lot of pride in the powerplay. I think the guys we have there are known to be good power play players, they really enjoy the structure and movement of it." said Assistant Coach A.J. MacLean.
Moose pulled their goalie but almost right after Teemu Kivihalme shot it from his own blueline to make it a 3-goal lead.
Teemu said about his first career goal, "Obviously feels good to put one in … it would be nice to score on a goalie, but I think that'll come here shortly."
Next up, Friday, Nov 29th, In New York against second in the division, Rochester Americans, 7:05 start.