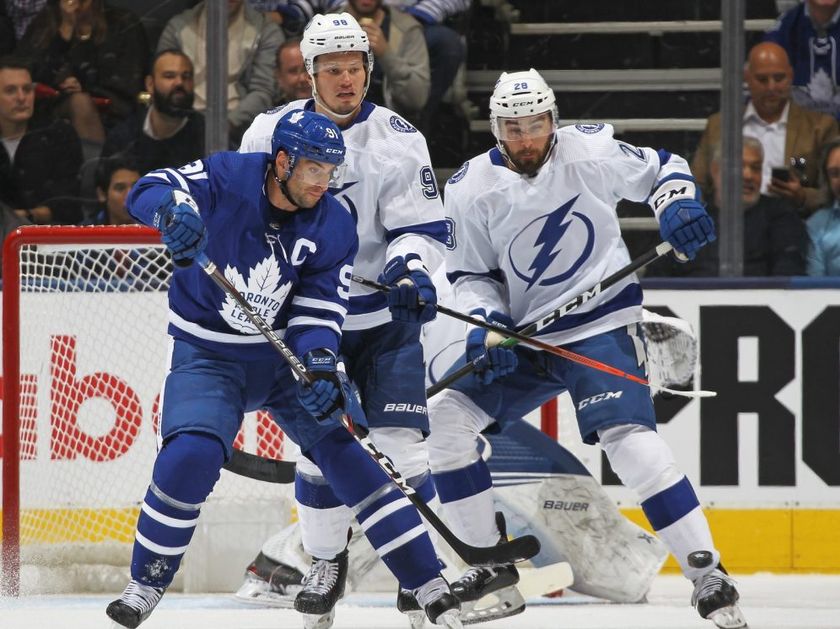 Photo courtesy of Claus Andersen, Getty Images
By Eduardo Harari
TORONTO. - It looks like a pattern has been developing for the 2-2-1 Maple Leafs. This is the third consecutive loss where this star filled squad can't seem to ke the momentum going past the first 30 minutes.
TORONTO. - It looks like a pattern has been developing for the 2-2-1 Maple Leafs. This is the third consecutive loss where this star filled squad can't seem to take the momentum going past the first 30 minutes.
There are always some highlights that surprise the Leaf faithfull as it was in the case of the first period last night. Within 20 minutes of play 7 goals were scored by both teams but after that the crumbling effect started to resurface at Scotiabank Arena.
Here is how it all started;
Point gave Tampa Bay a 1-0 lead fewer than three minutes into his first game of the season. Andreas Johnsson scored the equalizer less than two minutes later; Tavares put the Maple Leafs up 2-1 three minutes after that by deflecting in a shot for his first goal; Kucherov rifled in a blistering slap shot to make it 2-2; Kevin Shattenkirk outmuscled Morgan Rielly and undressed Andersen for a 3-2 lead; then, Matthews tied it again and Stamkos made it 4-3.
The Lightning carried a 4-3 lead into the intermission. Matthews’s sixth goal in five games tied it 3-3, but stood up for less than two minutes when Stamkos score a powerplay goal with 42.5 seconds left in the period.
Earlier in the morning Mike Babcock was asked about the stacked line of Brayden Point, Steve Stamkos and Nikita Kucherov and with a smile he mentioned "I’m not sure there’s enough puck to go around, we can find out.”
The trio  combined for 11 points in Tampa’s 7-3 victory against Toronto. It was a slaughtering Toronto never experienced in home ice which had the coached livid after the game.
“They were fast, they were on the puck, they were tenacious, they did it right,” Babcock said of the Lightning as a whole. “They stripped us from behind, they won 50-50 battles all over the rink. Even when we had the puck, suddenly they had the puck. In the end, it wasn’t good enough for us.
“We didn’t look like a very good hockey club. They looked quicker, better, more organized — say whatever you want — more skilled. We didn’t give ourselves a chance.”
The collapse was the second for the Maple Leafs in three games and their third successive loss. They looked outstanding against Ottawa and Columbus, but have not showed up against actual contenders.
As far as the offense went the combination of Matthews, Tavares and Marner were diminished to a pulp. Goaltending was another issue as Frederik Andersen had an off-night allowing 7 goals in 28 shots.
“We didn’t execute at a very high level and they did,” said Tavares, the Toronto captain. "That kind of an effort isn’t going to win many games.
“Freddie [Andersen] is a quality goaltender, one of the best in the world. We didn’t do enough to help him. Allowing seven goals at home is not acceptable.”
The question is not whether the Maple Leafs have what it takes to win the Lord Stanley Trophy but when are they going to start showing the desire to win it. And with comments like this, it doesn't inspire confidence.
“I don’t think we are overly worried,” Rielly said after the team fell to 2-2-1.  “It’s not what we want, but it’s early. We know we have to be much better than we were tonight.”
Toronto’s next game is in Detroit on Saturday.
Toronto Maple Leafs MLSE NHL NHLPA Brendan Shanahan Kyle Dubas Mike Babcock Scotiabank Arena Tampa Bay Lightning Auston Matthews Mitch Marner John Tavares Brayden Point Andreas Johnsson Nikita Kucherov Kevin Shattenkirk Morgan Rielly Steve Stamkos Frederik Andersen Ottawa Senator Columbus Blue Jackets Lord Stanley Cup Detroit Red Wings Claus Andersen Getty Images BarnBurner.ca Spanglish Sports World KBuenaRadioTV Eduardo Harari La Portada Canada