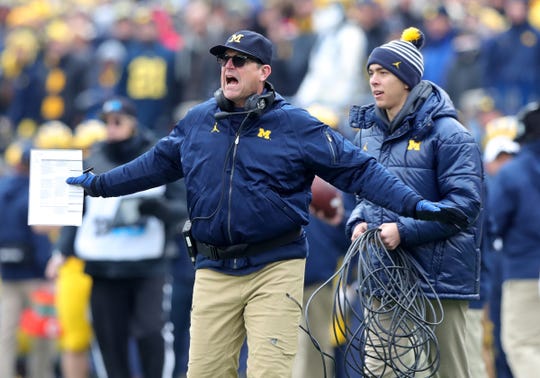 Photo courtesy of Kirthmon F. Dozier, Detroit Free Press
By Eduardo Harari
TORONTO. –  The Big House was electric on Saturday as the mighty Wolverines welcome their nemesis from Ohio State for the final game of the regular season.
The 9-2 Wolverines were hoping to extend their streak of 10-win consecutive seasons to 4 but it wasn’t meant to be as the powerful Buckeyes simply crushed those dreams with a 56-27 stumping prior to the beginning of Bowl season.
Remember, too, that before Harbaugh arrived nearly five years ago, U-M won 10 or more games once in eight seasons.
So, yeah, it can get worse.
Maybe that’s of little consolation after Harbaugh lost to Ohio State for the fifth time in five tries, which happens to be U-M's eighth straight loss in the rivalry and 16th in the last 18.
They were competitive for a while again. Though, really, that we’re even saying that at this point means we’re talking about moral victories.
Not that there were any Saturday at Michigan Stadium, unless you count the way the offense looked the first couple of quarters. 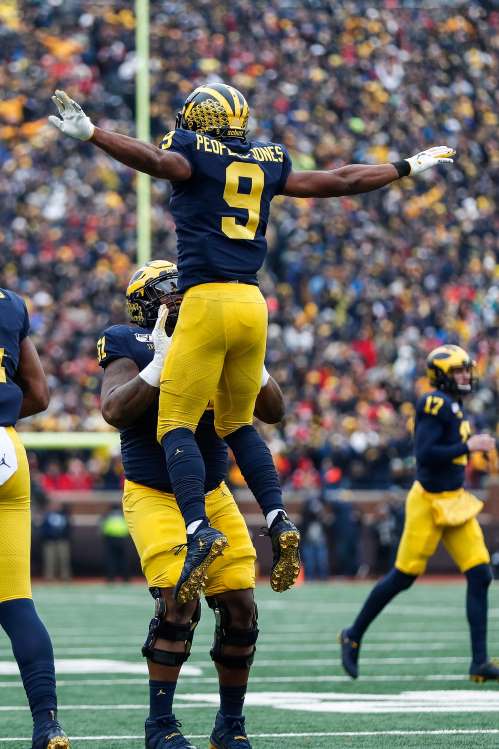 Photo courtesy of Junfu Han, Detroit Free Press
Fine. Michigan's football team showed it could score a couple touchdowns against the Buckeyes.
And, yet, Harbaugh has done – in part – what he was hired to do: remake U-M into a winning program.
Where does he go from here?
Not backwards. Take solace in that. Five years is long enough to establish a baseline. And he has. And if he wins U-M's bowl game, he’ll settle onto the baseline he’s created.
But then I doubt you’re thinking about the Holiday Bowl or the Gator Bowl or whatever other second-tier spot this team finds itself in a few weeks. You’re thinking about whether Harbaugh can build on the baseline he has established.
The Buckeyes have prevented Harbaugh from achieving his biggest goals, barring Michigan from Big Ten championships and entry into the College Football Playoff.
They have also reshaped the narrative about Harbaugh, who was once seen as a savior but now is viewed as a coach whose powers are limited.
The question now is whether Harbaugh is capable of making Michigan into a national power again. The doubts have only increased with each passing year. 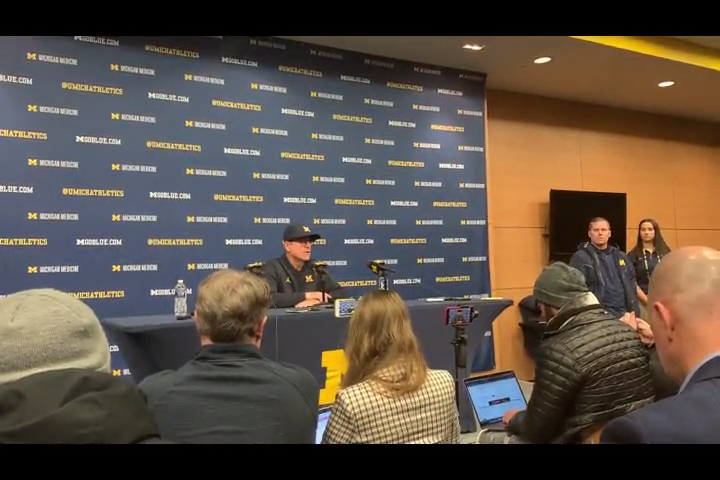 Photo courtesy of Orion Sang, Detroit Free Press
Michigan football coach Jim Harbaugh seemed to take offense to a question in his postgame news conference after his Wolverines lost to Ohio State on Saturday in Ann Arbor.
The question was: "... is it a talent gap, is it a preparation gap, is it a coaching gap, what is the biggest difference between you and Ohio State at this point?"
Harbaugh, never breaking character, responded with, "I mean, I'll answer your questions, not your insults. So ..."
The reporter was quick to defend the question, citing that U-M has allowed 118 points to Ohio State the last two seasons. He again asked what’s the biggest gap between Michigan and Ohio State?
Harbaugh answer: "They played good. ... They played better today."
So, again, where does he go from here?
Ask him and he’ll tell you his team will regroup and prepare for its next football game.
“Regroup and retool,” he said Saturday.
Call it coach-speak if you must. Though Harbaugh meant it. Because he believes it. Because he knows he keeps regrouping and retooling himself.
Now, you can’t pin this all on Jim Harbaugh. But the reality is this: it’s only gotten worse since he arrived five years ago.
And as for the last two games?
His Wolverines have given up more than 1,000 yards and 100 points. This after listening to the defensive staff tell us how they’d learned things from last year’s destruction in Columbus.
Well, they did learn. And so, did we.
U-M is still nowhere close to Ohio State. In fact, the gap might be as great as it has been in years.
That talent difference was easy to spot.
Ohio State didn’t just toss bombs or give it to their running backs while they hit wide-open lanes and scooted 50 yards — though they did plenty of that Saturday afternoon, too. 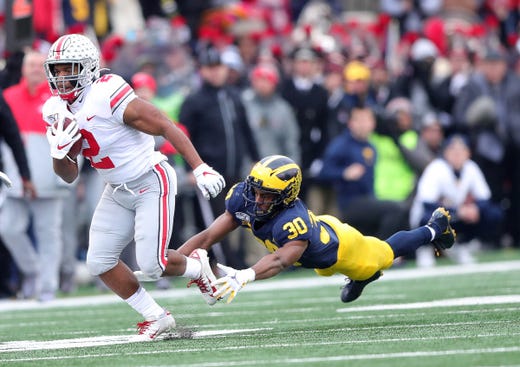 Photo courtesy of Kirthmon F. Dozier, Detroit Free Press
The Buckeyes combined power with all that speed and skill. In the first half, OSU’s offensive line regularly pushed U-M's defensive line several yards back from the line of scrimmage. At times J.K. Dobbins took a handoff and didn’t get touched for four or five yards.
But the talent isn’t just on offense. U-M did well to put up 27 points on the Buckeyes and might have had more.  That they were able to move the ball against one of the best defenses in college football says a lot about the Wolverines’ offense.
Yeah, you can point to the mistakes U-M made Saturday, to the personal foul penalty, to the offsides on fourth down, to the dropped touchdown pass in the end zone, to the running back who tried to run through a wall of defenders on fourth down. You can point to all of that and, in a vacuum, sure, mistakes hurt.
The problem is the margin for error. Ohio State has a wide margin.
Michigan has almost no margin. Not against the preeminent program in the Big Ten. A program that just lost its best coach in its modern history and … got better. 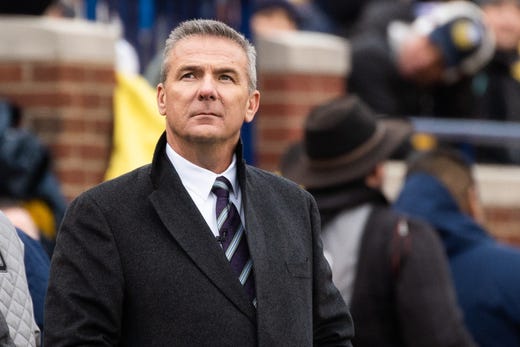 Photo courtesy of Anntaninna Biondo, Detroit Free
Admittedly with his players. Though Urban Meyer wouldn’t say that publicly.
These are Meyer's guys, except for Fields. And the team you saw Saturday was the culmination of all his years in Columbus.
Right now, that’s the best of Harbaugh’s legacy. That he reinvigorated a sagging program and that he hasn’t stopped looking for ways to keep pushing. That it hasn’t been enough is also part of his legacy.
And until Harbaugh finds a way to close that gap, we’ll keep seeing what happened at Michigan Stadium on Saturday:
A several-touchdown gap. A sea of red in the good seats … cut with a hint of gray, as Ohio State fans who’d been stuck in the upper reaches of the stadium crept closer to the field as the seats emptied out below, watching their mascot, the Buckeye, skipping in the end zone and doing back flips.
The truth is Michigan has never really competed at that level over a sustained period of time. Not in the modern era, anyway.
And the difference between expectation at U-M and what is possible is – not to mention what is history – is wide. 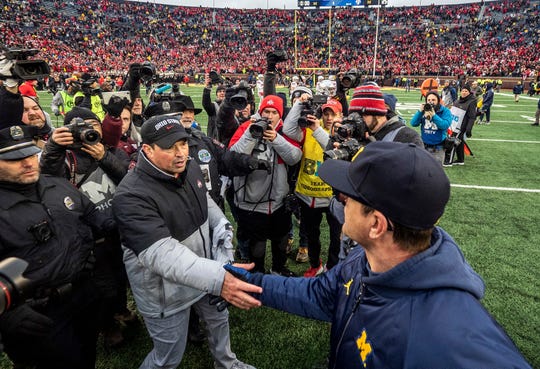 Photo courtesy of Tony Ding, AP
Harbaugh is fighting that expectation right now, along with a historically great program relative to the Big Ten. The Wolverines aren’t the only ones who can’t beat the Buckeyes; Wisconsin, for example, hasn’t beaten them since 2010.
Again, it’s about expectation. Harbaugh fed into that when he was hired. But not because of what he said. Rather, because of who he was and the success he’d had.
Also: because U-M's fan base and alumni couldn’t wait to get out of that eight-year wilderness, where double-digit win seasons were rare.
Remember, that happened once in almost a decade before Harbaugh.
Now it has happened in nearly four of the last five years.
That’s improvement. That’s just not elite.
Then again, U-M hasn’t been elite in a long time.