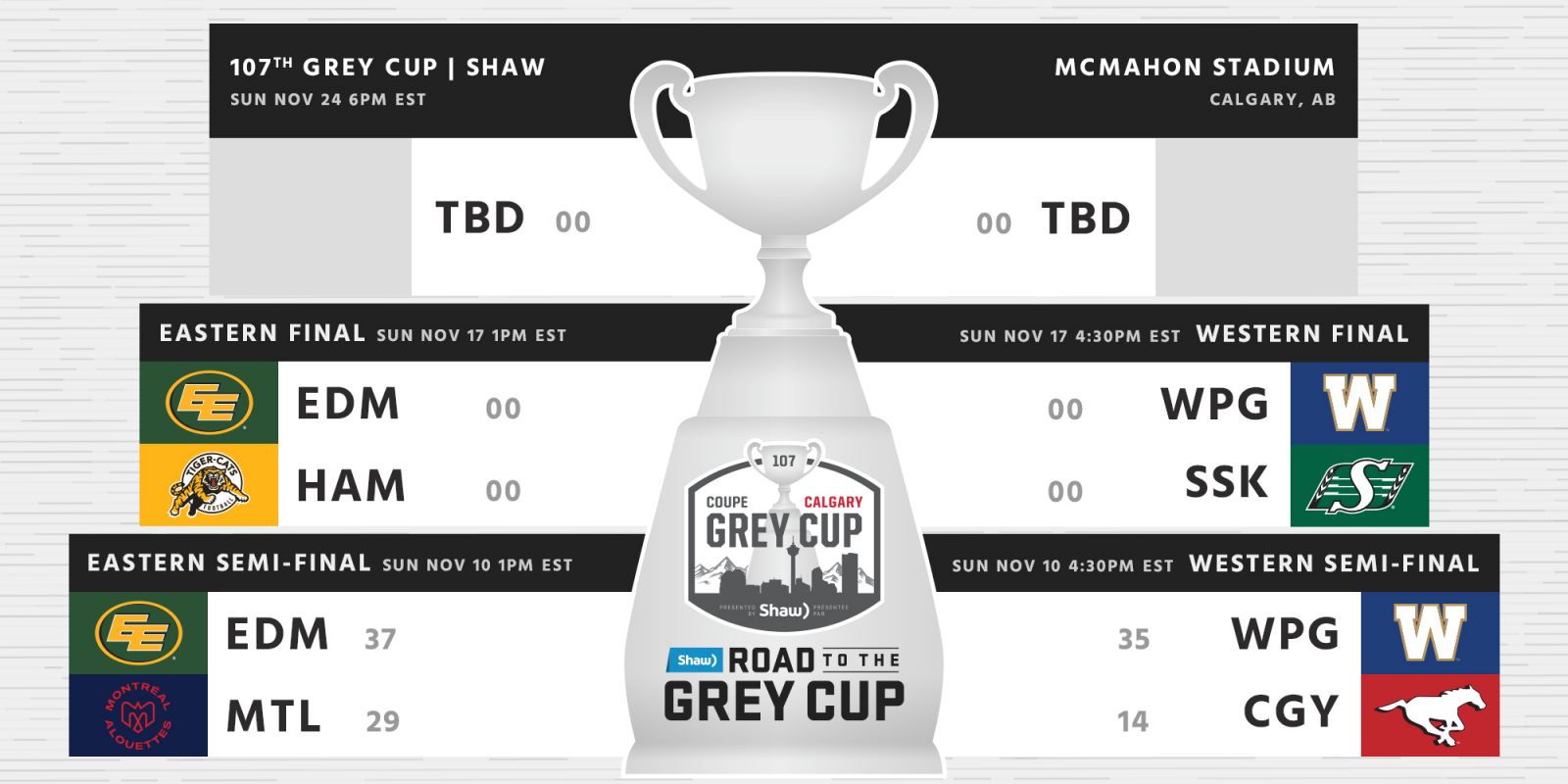 Photo courtesy of CFL Advanced Media
By Jarred Bapty – BarnBurner.ca
TORONTO. – The CFL got a wake-up call as the underdogs of the Grey Cup semi-final matches shocked the home teams to advance to the final matches of their respective divisions.
EAST SEMI-FINAL: EDMONTON ESKIMOS 37 – MONTREAL ALOUETTES 29 FINAL
Photo courtesy of Ryan Remiorz, The Canadian Press
MONTREAL, QUE – Edmonton Eskimos quarterback Trevor Harris put on an offensive clinic Sunday, throwing an outstanding 92.3% completion rate and 421 yards, with a touchdown and just one interception. Harris had constant support from his offensive line, giving him lots of time in the pocket to read the defense and get the ball exactly where he needed it.
CJ Gable rushed for 54 yards and two touchdowns, while Greg Ellingson was eight for nine and 125 yards.
Teams exchanged touchdowns in dramatic fashion in the first half. It was 15-7 for Edmonton when Mario Alford ran the kickoff back 99 yards for a touchdown. Boris Bede missed the convert kick and missed conversions would end up hurting Montreal.
An explosive second quarter followed. 17 points for Edmonton, while Montreal put up 19 after a scoreless first.
Sean Whyte hit a couple field goals in the third to extend the Eskimo lead 31-22 but, the Alouettes wouldn’t go away. They attempted a comeback in the fourth and converted one touchdown to get within range but, suffered a two-and-out and back-to-back interceptions to close the game.
Montreal QB Vernon Adams Jr. threw three interceptions total and was just 51.9% completion for 226 yards. The Als couldn’t get their lethal run game going with either William Stanback or Eugene Lewis, who combined for just 43 yards. Dante Absher led Montreal receivers with 60 yards on 5 catches.
WEST SEMI-FINAL: WINNIPEG BLUE BOMBERS 35 – CALGARY STAMPEDERS 14 FINAL
Photo courtesy of Jeff McIntosh
CALGARY, AB – A low-scoring affair for the first three quarters, there was little passing in this frozen contest. At -16 degrees Celsius, the weather made it difficult to throw and catch the ball.
Neither quarterback hit the 200-yard mark, and neither were very accurate in completions. The run game became the difference for the Bombers.
Andrew Harris ran 14 times for 57 yards but, it was backup QB Chris Streveler who broke the game open in the fourth quarter.
With Winnipeg up by one late in the third, Head Coach Mike O’Shea began using Streveler for plays on the ground. That bled into the fourth when Streveler gained 18 yards on four plays to get Winnipeg into field goal range for Justin Medlock.
Calgary suffered a two-and-out and Zach Collaros threw a 71-yard bomb to Darvin Adams for a touchdown to extend their lead. It was all Winnipeg after that. Bo Levi Mitchell threw an interception that the Bombers immediately capitalized on with another major to seal the win.
That 71-yard touchdown pass was one of just two snaps Collaros saw in the fourth. Streveler controlled the run game for the explosive quarter.
Mitchell was not himself, with just 116 yards and three interceptions.