Canada qualifies for 2022 FIFA World Cup with win over Jamaica 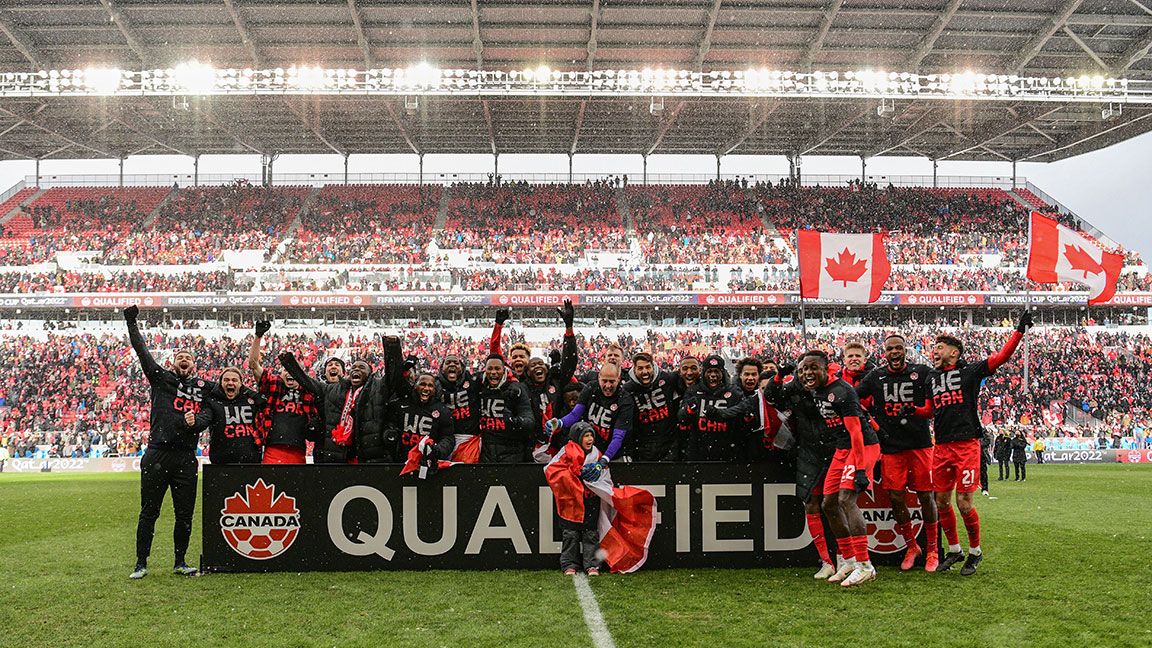 Article courtesy of the Canadian Press

TORONTO. - Canada celebrated the sport of soccer Sunday as the Canadian men won qualification to the 2022 World Cup.

They did it in style, hammering an outmatched Jamaican side 4-0 on a frigid day at BMO Field to improve their CONCACAF qualifying record to 14-1-4 over three rounds and end a 36-year absence from the men's soccer showcase.

"I think this country, they never believed in us. Because we've given them nothing to believe in," said coach John Herdman, the architect of the Canadian men's success. "They believe now.

"And I think if we all get behind each other — this is the time for everyone to get behind football and unite. Because we can be a powerhouse. And it's time."

Qatar awaits this November and the rest of the world better watch out.

"We are the best team in CONCACAF," said midfielder Jonathan Osorio.

"Now people believe," added the Toronto FC veteran, shivering in the cold. "And it's incredible how much people believe. And it's only going to get better. Now we want to go to a World Cup and really make a statement."

Canada, which only needed a draw Sunday to qualify, has outscored its opposition 54-7 while posting 12 clean sheets in qualifying.

Cyle Larin, Tajon Buchanan, and Junior Hoilett scored as the Canadians had their way with the Reggae Boyz before a loud and proud sellout crowd of 29,122. A Jamaican own goal in the 88th minute padded the score. And the margin of victory could have been far more lopsided.

For Herdman, who led the Canadian women to back-to-back Olympic bronze before taking over the men's team in January 2018, it was a tipping point.

"We're a football country," he said. "We've got a kid (Alphonso Davies) winning Champions League finals. We've got players all over Europe. We've got young kids coming through. And we've just qualified for a World Cup. This is a legit football country.

"A women's team that's won an Olympic gold. What more can we ask for? It's time."

Canada (8-1-4, 28 points to lead the final CONCACAF qualifying round) dominated from the get-go, stacking scoring chances like firewood. The home side was up 1-0 after 13 minutes and 2-0 at the break. It could have been 4-0 midway through the first half when the sun made its first appearance.

Jamaica (1-7-5, eight points) spent the afternoon in reverse. The game was done and dusted after the first half.

The historic win came 37 years after Canada qualified for the 1986 World Cup in Mexico with a 1-0 victory over Honduras on Sept. 14, 1985, in St. John's, N.L. That marked the Canadian men's lone trip to the soccer showcase, where they lost all three games without scoring a goal.

Canada soccer has been on a high with the sixth-ranked Canadian women winning gold last summer at the Tokyo Olympics. Now the 33rd-ranked men, led by Herdman, get their time to shine in Qatar, while lengthening their runway to the 2026 World Cup, which Canada is co-hosting with the U.S., and Mexico.

The Canadian men also had a chance to seal qualification on Thursday in Costa Rica but lost 1-0 after playing two-thirds of the game with 10 men in the wake of Mark-Anthony Kaye's red card.

The Costa Rica loss set the stage for the Toronto celebration.

"I'm so pleased that this is how it was meant to be," he added. "So, I know why the football gods wouldn't let us score (in Costa Rica). It was for tonight."

The fans braved the biting cold after the match to savour the moment with the players and team staff, who celebrated in the middle of the field in front of a sign that simply said Qualified. Players, wearing T-shirts that had Canada 22 on the back and We Can on the front, combined with fans on a Viking Clap, building in crescendo.

There was even a taped message on the video board from Davies, back in Germany where he is recovering from myocarditis, a heart inflammation after a bout of COVID.