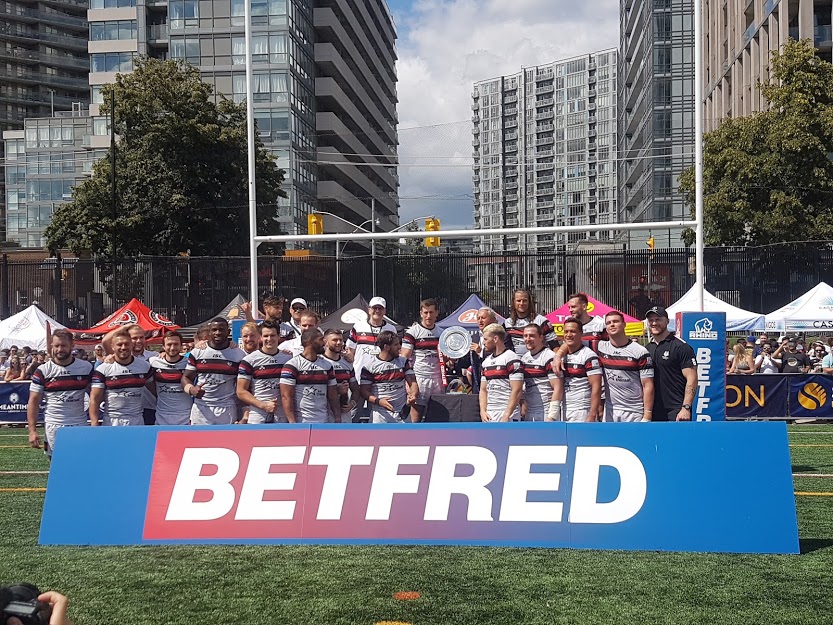 By Heather Toole
BarnBurner.ca
TORONTO. - Toronto Wolfpack has returned from their latest trip to the United Kingdom in a commanding fashion, with a 56 – 6 win over the current second place visiting team York Knights, showing why they are the 2019 Betfred League Leaders. The Team received the League Leaders Shield while abroad, however held a ceremony upon their win in Toronto to celebrate and hoist the shield in front of their fans and supporters.
The team took to the pitch with determination and drive from the beginning of play, as only 35 seconds in as #27 Hakim Miloudi was able to steal the ball and make a huge break back to the Knights end.  At the 3’ mark Toronto scored their first try, following a smooth series of passes to progress up the field and Gareth O’Brien, #1, successfully pushing over the line.  O’Brein who seemed to own the first 21 minutes of the game, had his name heard repeatedly as he proceeded to get a hat trick,  scoring a try in both the 17’ and 21’ marks putting Toronto up 16 – 0. Moments later  in the 23’ Hakim Miloudi picked up where he started and scored in the corner receiving the ball off of O’Brien after a long jaunt  down the field, making it 20 – 0. The sore continued to rise three minutes later with team captain Joshua McCrone taking the ball across the line between the uprights, with a good conversion, Toronto’s lead 26 – 0. Frustration from York team mates could be seen and heard as team-mate Joshua Jordan-Roberts fumbled the ball at center field, further into play attempting to get through Toronto defense frustration continued to plague the team who did not seem to be reading each other well at this point, as team mates turned to pass the ball with no one ready of either side.  Toronto continued to take advantage of the situation in the 37’ as Andrew Dixon scores with a good conversion my O’Brien  taking the score 32 – 0 which was carried into halftime.
Returning to the game right where they left off, Wolfpack member Andrew Ackers  got his first try of the game in the 40’, with a failed kick attempt score climbing to 36 – 0. Two minutes later Josh McCrone scoring again, with no Knights there to defend the zone, 42 – 0.  Nine minutes later (49’) York finally breaks through Toronto’s defense, scoring their first and what would be only points of the match. In true Canadian fashion, some of Toronto’s fan base even had to cheer for the Knights never give up efforts which gained them six points. The Wolfpack then continued their attack mode with left wing -  Matthew Rusell scoring again in the 60’ and  Andrew Ackers second of the game at the 78’ resulting in the final score 56 – 6.
Head coach Brian McDermott commented in post-game interview that the “The message here is let’s keep getting better, driving and getting better… we have to get to the semi-final first before we worry about the final.”  While commenting that they  dismantled the second place team “not by flashy plays”,  that its “not always about winging the game, it’s about performing well each week and getting better each week.” Before heading back to his team McDermott commented on having the presentation of the Betfeld League Leaders Shield in Toronto, he said they “didn’t want to celebrate in the U.K.” where he said everyone booed them which he found “appalling” and made him “a little resentful” so they absolutely wanted to celebrate and lift the trophy with their fans.
Toronto’s next game will be at home (Lamport Stadium) Saturday August 17 against the Rochdale Hornets, at 1:00.
Toronto Wolfpack RFL Eric Perez David Argyle Brian Noble Brian McDermott Toronto Wolfpack Advanced Media KBuena Radio Heather Toole Barn Burner Network Spanglish Sports World La Portada Canada