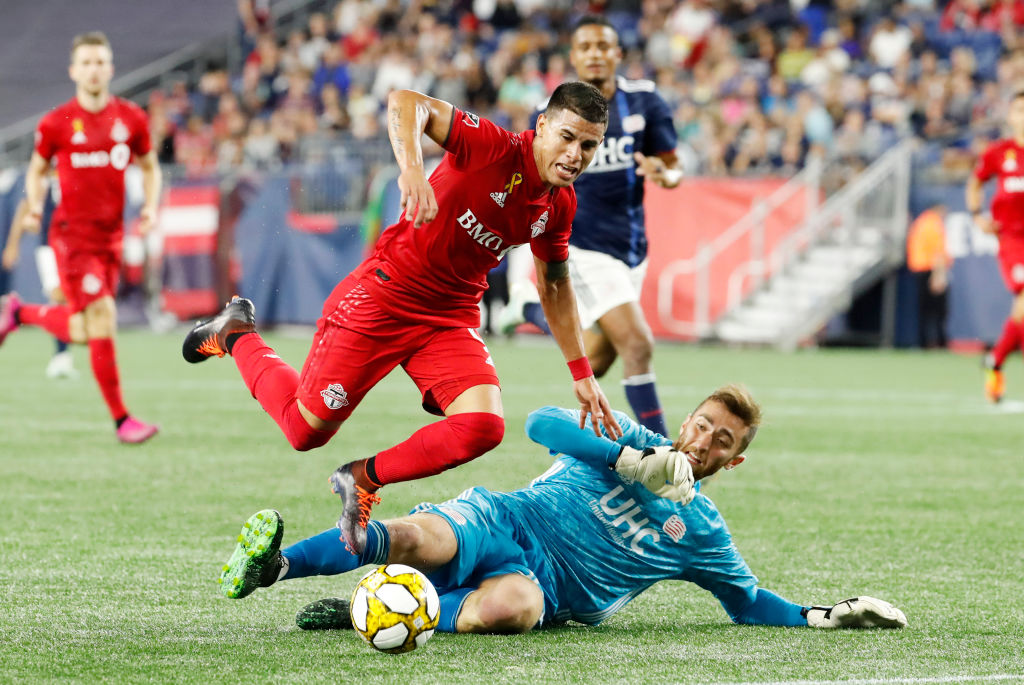 Photo courtesy of Toronto FC Advanced Media, Getty Images
By Eduardo Harari
Toronto. - There are not many places that holds bad sensations for a sports team but Gillette Stadium might be the one the Reds might want removed from their schedule.
In the history of their 31 battles at Gillette Stadium, the Reds have only managed to win 8 times while tying 10 times and being defeated 13 times. And the story contimues as on this night it wasn't much different.
Toronto held the Revolution attack on its toes through 86 minutes considing New England only 14 shots on goal of which only 5 were on target. The Revolution definately had the advantage on free kicks with 20 during the match which went scartered and with out much of a result.
The Reds scored first on the 74th minute when Nicolas Benezet headed a save by the Revolution ’keeper Matt Turner on a shot of Marky Delgado. The Frenchman played his best game for the Reds since joining the team on July 31.
In the 86th minute Gustavo Bou managed to get free and fired a routine shot that TFC goalkeeper Quentin Westberg would have saved on any given game but this one skipped underneath him and made its way to the net for the equalizing score.
The game had its climatic moments as in the 38th minute an offside was called on what many said should have been a red card against the Revolution goalkeeper on a very controversial play.
“He’s on-side, by a yard,” Bradley said of Erickson Gallardo’s 38th minute breakaway, which ended with a collision just outside the penalty area with New England goalkeeper Matt Turner, who likely would have been ejected if not for the delayed offside flag of Kathryn Nesbitt.
“That’s not offside, it’s a red card,” Bradley added. A big play – like Gallardo’s breakaway – might have tipped the balance, especially since Nicolas Benezet put TFC up 1-0 off a 74th minute header.
After the game, Vanney expressed his frustration over the call, insisting that Galllardo was onside and Turner should have received a red.
“It should have been a red card,” he said. “We got VAR. I don’t understand how we don’t get that right. I’d like to see something convincing that said he was offside because what I see is he’s onside.”
Toronto, which entered the game in eighth place and took sole posesion of the 7th and final playoff spot in the Eastern Conference after the Montreal Impact loss to the D.C. United.
A point on the road is positive result, but there was a feeling inside the TFC locker room after the game that they should have had three.
“We went after the game in a good way,” Reds captain Michael Bradley said. “To come here and play the way we did and come away with a point is still positive; we feel like we should probably be walking away with three, but that’s life sometimes."
“But we feel good about what we’ve been able to do the last few weeks,” Bradley added. “Games this time of year are scrappy and they can hang in the balance for a long time.”
Toronto’s visit to New England kicked off a three-game road swing that goes through Cincinnati and Colorado.
Toronto FC Bill Manning Ali Curtis Greg Vanney Nicolas Benezet Marky Delgado Michael Bradley Erickson Gallardo Quentin Westberg Matt Turner Gustavo Bou Kathryn Nesbitt New England Revolution Montreal Impact DC United FC Cincinnati Colorado Rapids Gillette Stadium Toronto FC Advanced Media Getty Images Spanglish Sports World KBuena Radio Barn Burner Network Eduardo Harari La Portada Canada