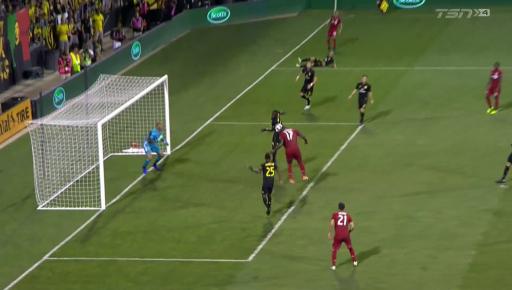 Photo courtesy of TFC Media Services
By Giancarlo Aulino
BarnBurner.ca
Toronto. - Toronto FC’s Jozy Altidore scored a crucial goal in stoppage time to secure an important point
on the road for Toronto FC as they continue their quest for a playoff spot.
Toronto coach Greg Vanney went with a 3-4-1-2 formation for their road game with the Columbus Crew;
Quentin Westberg started in-goal in place of Alex Bono, who started midweek against the Ottawa Fury,
Chris Mavinga, Omar Gonzalez, and Auro started as the defensive trio on the backline, Justin Morrow,
Jonathan Osorio, Michael Bradley, Nick DeLeon, and Alejandro Pozuelo were in the midfield, and Patrick
Mullins and Jozy Altidore were the strikers up-top.
It was a relatively slow start for both teams tonight as they were both trying to find their momentum
and a spark offensively for the better part of the first half. Toronto were coming off a great mid-week
performance against the Ottawa Fury in a game that saw them advance to the finals of the Canadian
Championship. The team were looking to replicate that performance against the Crew in hopes of
keeping their playoff and MLS Cup aspirations alive.
After both teams had exchanged goal scoring opportunities, Jonathan Osorio struck a perfectly placed
shot in the back of the net from outside the Crew’s 18-yard box to put his team up 1-0. The goal was a
significant moment for Toronto as it came near the end of the first half and provided the team with
momentum leading into half-time and something positive that they’d be able to build on for the second
half.
The lead would be short-lived as the Crew started the second half strong, which resulted in Pedro Santos
scoring in the 48th minute to tie the game 1-1. Toronto have had some trouble this season particularly
when it comes to maintaining a lead and closing out games. With the Crew tying the game early in the
half, it essentially backed Toronto FC into a corner and forced Vanney to make some adjustments to his
lineup.
It would get worse for Toronto FC as David Accam scored a late goal in the 82nd minute following a
counter-attack, leaving Toronto in a position where they might’ve gave up crucial points on the road.
Just when it looked as though Accam’s goal would be enough to seal the win for the Crew, Toronto’s
Jozy Altidore score in stoppage time to tie the game 2-2 and secure one point on the road for his team
and keep them tied for the final playoff spot in the MLS Eastern Conference.
Altidore’s late game heroics was positive and a sense of relief for the team as well as coach Greg Vanney
because a 2-1 loss would’ve raised many questions post-game on the direction and trajectory of the
team going forward.
Toronto is back in action with a big game next Saturday when they host their rival Montreal Impact at
BMO Field.
Toronto FC Bill Manning Ali Curtis Greg Vanney Jozy Altidore Quentin Westberg Alex Bono Chris Mavinga Omar Gonzalez Auro Justin Morrow Jonathan Osorio Michael Bradley Nick DeLeon Alejandro Pozuelo Patrick Mullins Columbus Crew Ottawa Fury David Accam Montreal Impact BMO Field TFC Media Services GianCarlo Aulino BarnBurner.ca KBuena Radio TV La Portada Canada