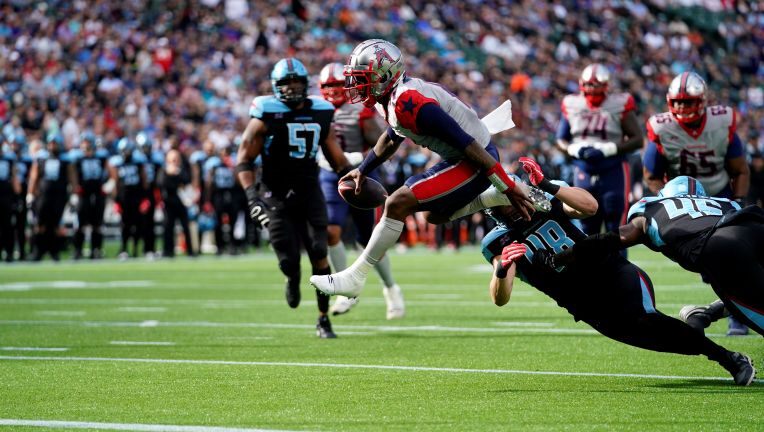 Photo Courtesy of fox26houston.com
By Jake Carter, BarnBurner.ca
TORONTO. – Week 4 of the XFL saw teams continue to build on early trends to begin the season, whether it be in the winning or losing direction. Saturday featured games between L.A. and New York, as well as Seattle taking on St. Louis. Sunday saw an all-Texas matchup between the Roughnecks and Renegades before DC and Tampa Bay closed out the action.
Los Angeles Wildcats vs. New York Guardians
The Guardians snapped a two-game losing streak with help from a late-game blocked field goal and solid play from quarterback Luis Perez in a 17-14 victory.
Perez was 18-for-26 with 150 yards through the air, highlighted by a second-quarter touchdown. His counterpart, Josh Johnson, collected 330 passing yards and threw two touchdowns in the loss.
Jarrell Owens blocked a Wildcats field goal in the third quarter that would have made it a 14-9 game. Instead, he kept the game at a 14-6 Guardians lead.
Darius Victor had 82 rushing yards on 18 carries for New York, who had 122 rushing yards compared to just 40 for Los Angeles.
Seattle Dragons vs. St. Louis BattleHawks
The BattleHawks controlled this game early, racking up a 17-3 lead at halftime. Although the Dragons stormed back in the second half, St. Louis claimed the 23-16 win at home.
BattleHawks quarterback Jordan Ta’amu was 20-for-27 on the day, throwing for 264 yards and a touchdown.
Seattle put B.J. Daniels in at quarterback to begin the second half, and he boosted their offence. He threw for 100 yards and a touchdown as well as rushing for 84 yards. Despite the effort, a late-game interception to Will Hill sealed their fate in the contest.
With the win, St. Louis is 3-1 to begin the season while Seattle is 1-3.
Houston Roughnecks vs. Dallas Renegades
The Roughnecks held on for a 27-20 victory to remain undefeated at 4-0. Houston’s defense had three interceptions as well as recovering two fumbles, one of which was returned for a touchdown.
Houston jumped out to a 15-0 lead but allowed Dallas to score the next 11 points to make it a tight game. The Renegades came as close as just one point with the score 21-20, although a late fumble recovery touchdown made it a 27-20 game for Houston.
Roughnecks quarterback P.J. Walker was 25-for-41 with 239 passing yards and two touchdowns in the win. Dallas is now 2-2 on the season.
DC Defenders vs. Tampa Bay Vipers
This contest was all Tampa Bay, as the Vipers blanked the Defenders in a 25-0 win. Taylor Cornelius threw for 211 yards and a touchdown in the victory. He began the game with two quick touchdowns, propelling Tampa Bay to an early 13-0 lead. After a field goal, they were up 16-0 at the half.
DC didn’t have an answer for the Tampa Bay offence, as Cornelius ran for a score in the third quarter to increase the lead. The Vipers added a field goal, easily rolling to the shutout win.
Tampa Bay snapped a three-game winless streak and is now 1-3 on the season.