UEFA Futsal Champions League 2021: The Round of 8 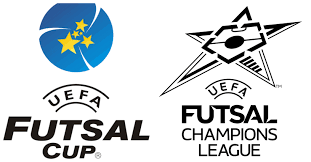 Photo courtesy of UEFA
By Andrea Benton & Alvaro de Almedia
Spanglish Sports World Columnists and Hosts of Born 2 Play Futsal
TORONTO. - The next 8 teams have been chosen! During the week of February 15th, the UEFA
Futsal Champions League round of 16 was held. We shared our predictions, and we are
1 for 2, although the ACCS Futsal vs Barca game came down to the last 60 seconds.
ACCS (FRA) 1 x 2 Barcelona (ESP):
Photo courtesy of futsalfeed.com
This game was intense from the start and it did not disappoint. The first half was
exciting with ACCS Futsal scoring the first goal from a set piece, Eduardo. ACCS Futsal
came out sharp and tight on defense, much to the surprise of Barca. Barca’s coach,
Plaza smartly called a time out and reset his team.
The next goal came on the Barca side from Ferrao. The goal was right top shelf. Tough
to stop the best futsal player in the world with that one. The game was now even at 1-1
and you could sense that Barca regained their confidence. ACCS Futsal’s goalie,
Aksentijević played extremely well in the first half.
The second half was just as exciting with both teams playing well. Ximbinha scored for
Barca. Aksentijević (GK) was then awarded a yellow card, understandably. The intensity
of the game continued until the last 60 seconds. The final set piece of the game was
played with Richardinho taking a shot. You can’t ask for anything else than letting your
top player take a shot. It was an exciting and intense way to end the game.
Inter FS (ESP) 4 x 2 Kherson (UKR):
Photo courtesy of OTL Media
This game was also fast paced but seemed to be more open than the Barca/ACCS
game. Inter FS took 47 shots to Kherson’s 40 shots. Even before the first goal, there
were two yellow cards to Shoturma of Kherson and Eric of Inter FS. The only goal
during the first half was Inter FS forward player, Saldise. The second half progressed
without a goal until 30’08 with a goal by defender Zvarych of Kherson. Inter FS
countered 2 minutes later with a goal from forward Borja. Kherson undeterred scored
another goal less than a minute later from their forward, Pola. This meant that the game
was tied but ultimately, the last two minutes of the game Inter FS scored winning the
game 4-2.
In terms of the remaining games, the Round of 8 including the finals will be moved from
Belarus to Zagreb. UEFA made this decision after looking at the Covid numbers and
travel restrictions. It’s nice to see UEFA adapting locations to ensure that the
tournament continues to happen. We all need futsal right now!
Another interesting statistic is looking at players per nation and goals, the nation with
the most players and goals is Brazil with 39 players and 8 goals. There is a reason that
Brazil is so successful in producing both futsal and football players.
Did you watch any of the games? Tweet us at @Born2Futsal