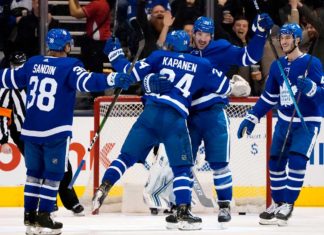 Photo courtesy of mapleleafshotstove.com
By Jenn Connor, BarnBurner.ca
TORONTO. - Following last week’s embarrassing loss to the Carolina Hurricanes and infamous Zamboni driver/emergency goalie David Ayres, the Toronto Maple Leafs picked themselves off the mat and posted one of their most impressive -- and important -- weeks of the season. The blue and white won both games on their Florida road trip, downing the high flying Tampa  Bay Lightning 4-3 and, in a key battle for third place in the Atlantic Division and a playoff spot, defeated the Florida Panthers 5-3. The Buds then returned home and outfought the Vancouver Canucks 4-2 on Saturday night at Scotiabank Arena.
In defeating the Lightning, the Leafs snapped Tampa’s twelve game home winning streak and became the first Atlantic Division team to defeat the Bolts since early October. Special teams played an integral part in the victory, the Leafs going two for four on the power play while holding the Lightning scoreless on three opportunities with the man advantage.  Captain John Tavares scored twice with William Nylander’s second period power play goal proving to be the game winner. Freddy Andersen withstood a furious third period barrage, turning aside 13 of 14 Lightning shots to seal the victory.
Jake Muzzin, who signed a four-year contract extension earlier in the week, was forced to leave the game with a hand injury and is expected to be out of the lineup for four weeks.
With a two-point lead over the Panthers in the battle for third in the Atlantic Division and with Florida holding a game in hand, Thursday’s tussle at the BB&T Center was close to a must win for Toronto. In a wild opening period, the Leafs fell behind 3-1 but weathered the storm, scoring four consecutive goals to deliver the Panthers a stunning loss.
Following the statement win over Florida, the Leafs returned home and turned in a gritty performance in their victory over Vancouver. With Muzzin sidelined, defenseman Martin Marincin stepped up and scored the game-winner, his first of the season.
In addressing reporters after the game, Leafs head coach Sheldon Keefe referred to the Carolina defeat as a “shock to the system” and looking back on the week was obviously pleased with how the team was able to refocus.
“We got a wakeup call there and we’re heading out on the road –- we’ve got the guys attention. And they recognized the importance of getting their stuff together and they responded well this week.”
With Florida’s 3-0 loss to the Calgary Flames on Sunday, Toronto now holds a five-point lead over the Panthers, both teams having played 66 games.
The Leafs now head West for three games with stops in San Jose, Anaheim, and Los Angeles. There is still a long way to go in the drive for the playoffs but if the loss to the Hurricanes was a test as to how the Leafs respond to adversity, Sheldon Keefe’s club passed with flying colors.