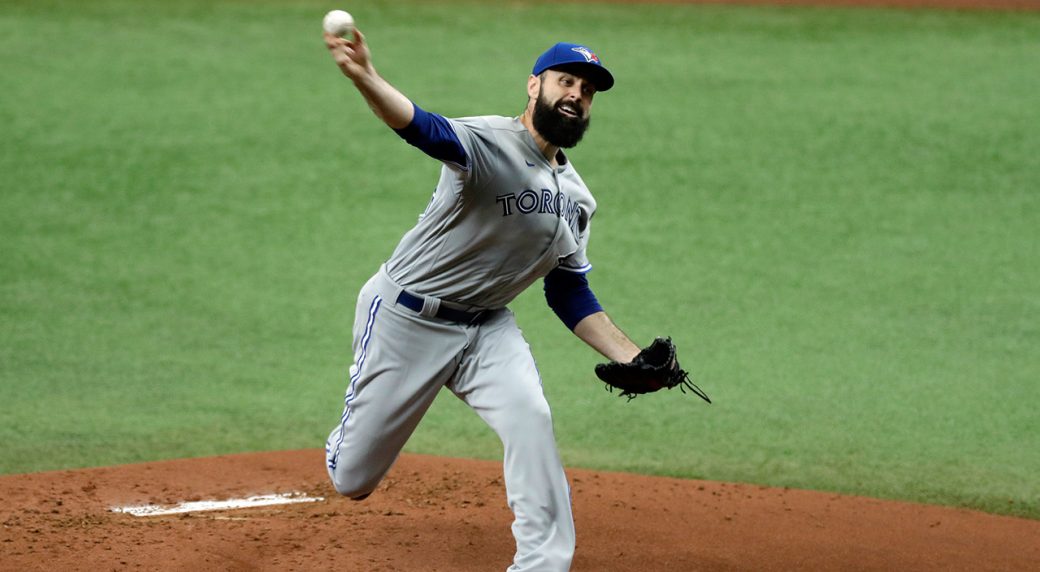 Photo courtesy of Chris O'Meara, AP
By Ben Browne
BarnBurner Network
TORONTO. - A day after earning their first opening day win since 2016 – also in St. Petersburg against the Rays – the Toronto Blue Jays were back at Tropicana Field Saturday afternoon for the middle tilt of their 3-game opening-weekend set with the Rays.
Matt Shoemaker made the start for the Jays, returning to the mound for the first time in more than 15 months after tearing his ACL covering first base in a start in Oakland last April 21.
Shoemaker got into a little bit of trouble early, allowing back-to-back singles to Brandon Lowe and Yandy Diaz, but, with men on the corners and one out, popped up Yoshi Tsutsugo and got Joey Wendle to escape the inning unscathed.
From then on, It was the dictionary definition of a pitcher's duel between Shoemaker and his mound opponent, Ryan Yarbrough. Both hurlers allowed next to nothing over the next five innings. In the 6th, the Rays broke the ice.
After Shoemaker walked Michael Perez, Kevin Cash brought in Mike Brosseau to pinch run. That move immediately paid dividends, as Ji-Man Choi doubled him home to give the Rays a 1-0 lead. Shoemaker would finish the frame, going 6.0 innings, allowing a run on three hits, while walking two and striking out four.
Said advantage didn't last long, as, with out in the 7th an unlikely power source put the Jays back on even terms. Reese McGuire hit a bomb into the vacant right-centre-field seats to tie it up. That dinger was his first since last September 10.
Charlie Montoyo then made a somewhat-curious bullpen move, summoning Sam Gaviglio to pitch the 8th inning after A.J. Cole threw a flawless 10-pitch 7th. That move – unlike Cash's an inning earlier – did not pay off. Gaviglio allowed a 1-out single to the 9-hitter, Mike Zunino, and followed that up with a walk to Ji-Man Choi.
The next batter, Brandon Lowe, made Gaviglio pay. He shot a triple into the left-centre-field gap, scoring both runners to make it 3-1. Lowe than scored on a balk from Gaviglio to make it 4-1 Rays after eight.
The Jays showed little resistence in th 9th, going three up, three down against Rays closer Oliver Drake to secure a 4-1 Tampa victory and set up a rubber match in the three-game series tomorrow.
All indications point towards rookie Thomas Hatch making his major-league debut tomorrow for the Jays, opposite 2018 Cy Young winner Blake Snell for the Rays.
MLB. MLBPA Toronto Blue Jays Tampa Bay Rays Rogers Communications