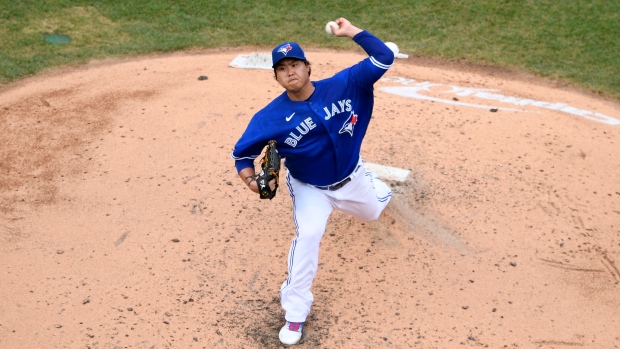 Photo Courtesy of Nick Wass, AP
By Logan Lockhart
BarnBurner Network
TORONTO. - Michael A. Taylor’s two-run home run off Hyun-Jin Ryu in the fourth inning led the Nationals to a 6-4 victory over the Blue Jays on Thursday afternoon.
Ryu’s second start as a member of the Blue Jays (3-4) in Washington was not as impressive as his debut. The Nationals (3-4) capitalized with runners on base in the third, when catcher Kurt Suzuki’s double drove in two to give his team a 2-1 lead.
The fourth inning was more of the same for Ryu, with this time the difference being the home run ball, when Taylor hit his first of the year to extend the Nationals lead to 4-1.
Blue Jays manager Charlie Montoyo pulled the former Dodger in the fifth inning after an Asdrubal Cabrera RBI double extended Washington’s lead to 5-2.
Ryu was less efficient compared to his first Toronto start against the Rays. Thursday afternoon saw the lefty throw 93 pitches in 4.1 innings of work while seeing his fastball velocity drop by about one mile per hour.
The new ace for the Blue Jays allowed a total of nine hits and five earned runs against the defending World Series champions.
For the second straight game, Toronto acted as the home team despite playing at Nationals Park in Washington.
Bo Bichette was back in the lineup playing in his usual role as the leadoff hitter after being absent with hamstring tightness for three games.
Bichette’s lead off single in the first inning set the table for the Blue Jays to cash in runs early after being shut out by the Nationals on Wednesday night.
Lourdes Gurriel Jr.’s RBI single broke the scoreless drought for Toronto dating back to the eighth inning on Tuesday night, as Bichette was driven in to give the “home” team a 1-0 lead.
Gurriel Jr. was a bright spot offensively for the Blue Jays at the plate going 3-4.
2019 World Series MVP Stephen Strasburg was scratched from his scheduled start Thursday afternoon against Toronto due to nerve irritation.
Replacing Strasburg was Erick Fedde, who like Ryu, made his second start of the year pitching 3.1 innings, while giving up six hits and two earned runs.
Fedde’s afternoon was done after Teoscar Hernandez launched a solo home run, preceded by a Joe Panik single and Danny Jansen walk in the fourth inning.
The eighth inning was the last time the Blue Jays scored, only managing to tally one run, and failing to close the Nationals lead any further. Hernandez hit his second home run of the day in the inning and fourth overall of the series to cut Washington's lead to 6-4.
Derek Fisher left the game after the third inning with left quad tightness.
Toronto’s series against Philadelphia originally scheduled to begin Friday and end Sunday has been postponed due to positive COVID-19 tests that have surfaced out of the Phillies organization.
The Blue Jays will next play in Atlanta on Tuesday night against the Braves with Matt Shoemaker being an order to make his second start of the 2020 campaign.
Toronto Blue Jays Ryu MLB MLBPA Washington Nationals BarnBurner Network Logan Lockhart AP Nick Wass