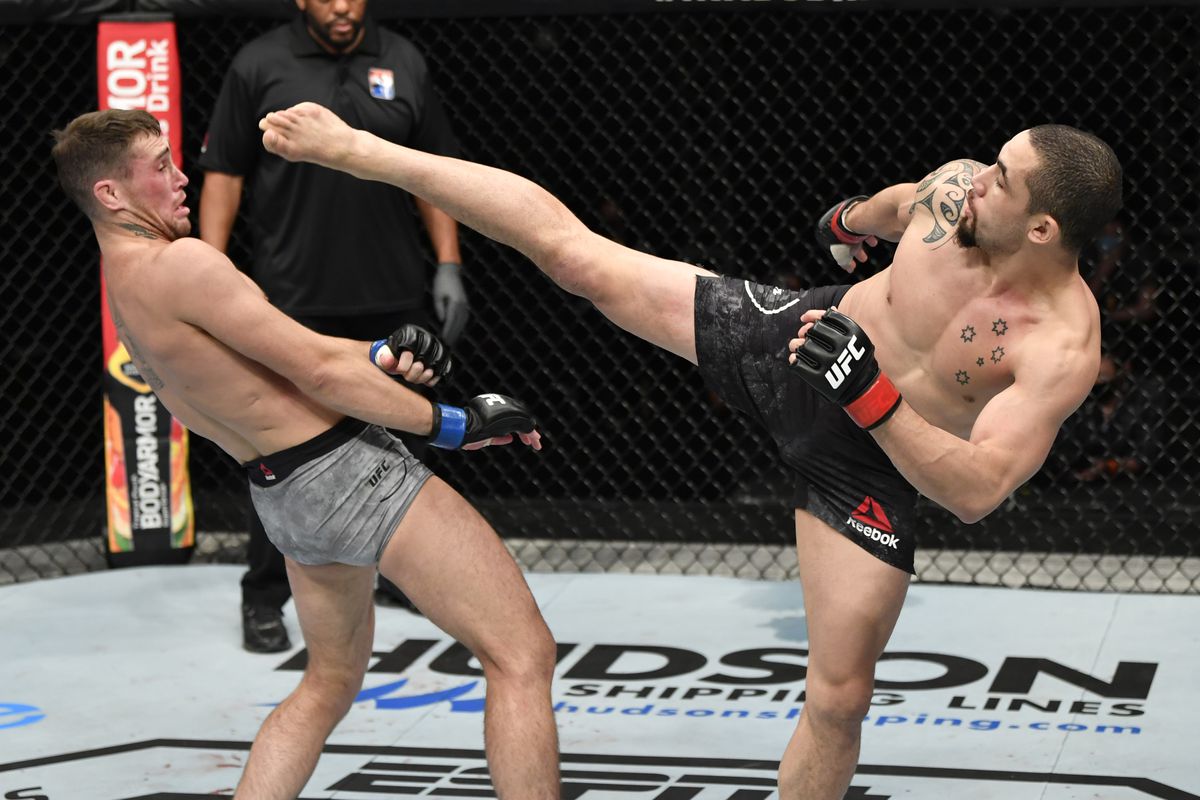 Photo courtesy of Jeff Bottari/Zuffa LLC via Getty Images
By Jenn Connor
BarnBurner Network
TORONTO. - Former middleweight champion Robert Whittaker earned a hard fought unanimous decision victory over Darren Till in the UFC headline event at Fight Island on Saturday night. In a highly technical, strategic fight, Whittaker held a significant advantage in total strikes, an edge which tilted the decision in his favour.
A clean left elbow from Till knocked Whittaker down in the first round but the Englishman was unable to inflict any additional damage and Whittaker weathered the storm. Just over a minute into the second round, Whittaker floored Till with a right and landed a number of vicious elbows before Till scrambled back to his feet with two minutes left in the round.
Whittaker was the busier fighter in round three and landed more significant strikes to gain a likely edge. The Australian repeatedly inflicted damage with calf kicks which were visibly taking their toll on Till.
In the championship rounds, Till stunned Whittaker with a left with just under three minutes left in round four and that flurry arguably won him the round, although Whittaker again held an edge in significant strikes.
An elbow from Till opened a severe cut just above Whittaker’s left ear with just over a minute left in round five, but Whittaker fought back, taking Till down and slamming him against the fence as time ran out. Though the fight was close, the decision did not come as much of a surprise, Till simply not doing enough to earn the victory.
With the win, Whittaker’s record improves to 22-5 and a rematch with champion Israel Adesanya, a fight UFC fans would no doubt like to see.
In other action from the main card, heavyweight Fabricio Werdum shocked Alexander Gustafsson,  earning a submission victory via an arm bar just 2:30 in to the opening round. It was a devastating loss for Gustafsson, who retired just last month after losing his last fight at light heavyweight. He emerged from retirement, moving up to heavyweight in the hope of a reversal in fortune, but to no avail. It was a pivotal win for Werdum who again demonstrated his veteran skill on the canvas.
In a battle of contrasting styles, strawweight Carla Esparza handed Marina Rodriguez her first loss winning a split decision. The striker Rodriguez dominated the first round, Esparza suffering serious swelling and a cut over her left eye. Rodriguez, however, could not defend Esparza’s ground attack. Esparza managed five takedowns which translated into almost nine minutes of ground control time. Esparza simply would not be denied, winning the last two rounds for a well deserved victory.
The trilogy of wars between light heavyweight veterans Mauricio “Shogun” Rua and Antonio Rogerio Nogueira that began in 2005 ended with Rua completing the hat trick, earning a split decision.
Veteran welterweight Alex “Cowboy” Oliveira scored a dominant unanimous decision victory over Peter Sobotta. Sobotta, making his first appearance in the octagon in over two years, appeared rusty and Oliveira took full advantage with a balanced attack that left no doubt as to the outcome.
Just ten days after winning his UFC debut, Khamzat Chimaev returned to the octagon and dominated Rhys McKee to register a first round TKO victory.  Rounding out the main slate light heavyweight Paul Craig stunned Gadzhimurad Antigulov applying a triangle choke for an impressive first round submission win.
In the undercard, Canada’s Tanner Bosser floored Brazilian Raphael Pessoa Nunes in the second round with a vicious overhand left to register an impressive TKO victory.  In welterweight action, more good news for Canada as  London, Ontario’s Jesse “The Bodysnatcher” Ronson stunned favoured Nicolas Dalby, applying a rear naked choke to secure a first round submission victory. It was the 22nd career win for Ronson against ten defeats.
The UFC returns to Las Vegas August 1st with Derek Brunson taking on Edmen Shahbazyan in the main event.
MMA Robert Whittaker Darren Till UFC Jenn Connor BarnBurner Network