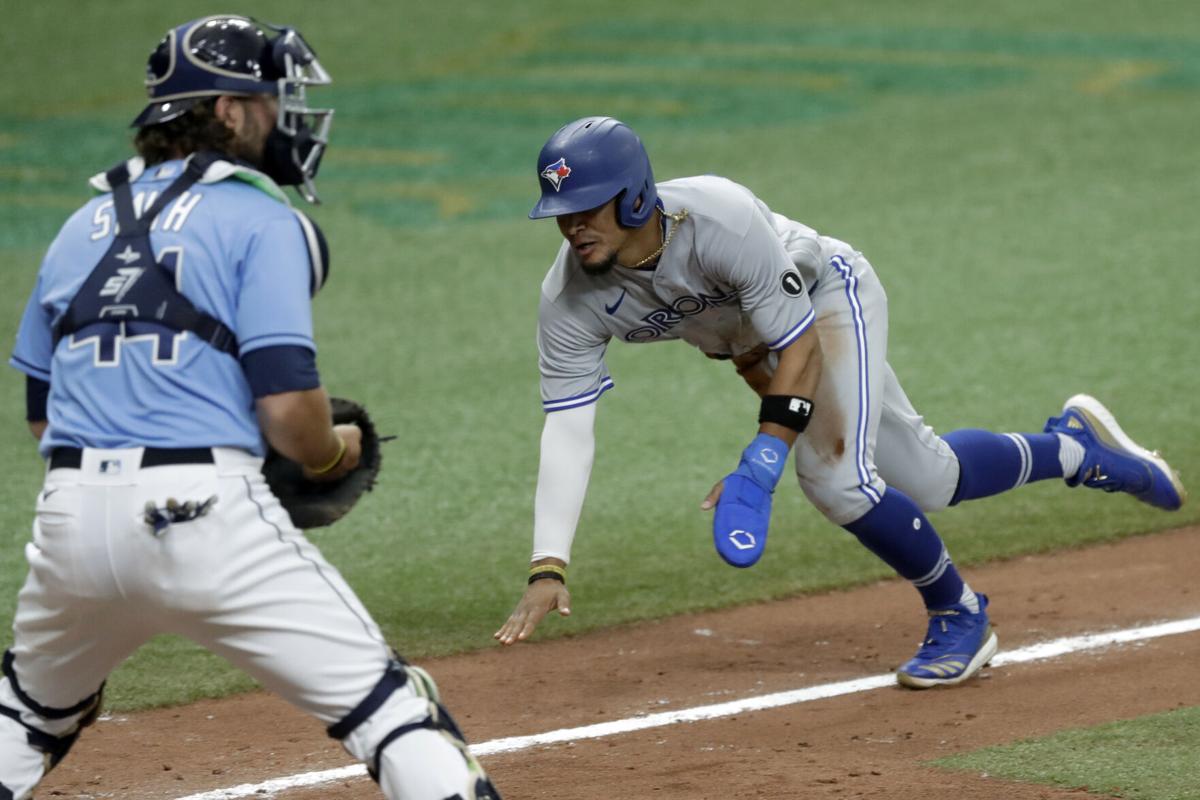 Photo courtesy of Chris O'Mera, Associated Press
By Rilley G Wilson
BarnBurner Network
TORONTO. - After an impressive opening day, and a 6-4 win over the home Tampa Bay Rays, the Toronto Blue Jays got into a pitching duel in the opening handful of innings Saturday. In Matt Shoemaker's 2020 debut, a three-run eighth inning propelled the Rays to a 4-1 victory, evening the three-game series at one game apiece.
The Jays got their first look at 2018 Cy Young winner Blake Snell, who led off the proceedings Sunday, pitching for the Rays. He struggled mightily in the early goings, and Toronto had the bases loaded in the top of the first. Unfortunately for the Jays, they failed to capitalize, leaving the bases full in their opening at-bat. Thomas Hatch made his Major League debut on the mound for Toronto in the bottom of the first, and escaped with two on.
Leaving men on bases became an unfortunate theme for the Jays as the game progressed. They had two men in scoring position in the second inning but yet again failed to convert.
Hatch continued to shine in his debut, though, going 2.1 scoreless innings, and capping it off with a 95 mile-per-hour fastball.
In the sixth, the Jays broke the ice. They opened the inning with six straight hits. Teoscar Hernandez got the party started with a double to left-centre, scoring Randal Grichuk from first. Hernandez would score on the ensuing hit from Danny Jansen, making it 2-0 Jays.
Toronto would extend their hitting streak to five, loading the bases. Who else would you want at the plate but Bo Bichette? He was next in the order for the Blue Jays, and would capitalize, on a sixth straight hit, driving in two runs, and extending the lead to 4-0.
Eventually, witn Vladimir Guerrero Jr. hitting, the Rays would stop the bleeding with a double play, escaping the inning down 4-0.
Anthony Kay went 2.2 innings for the Blue Jays, and was impressive in his season debut, surrendering a lone run on a Ji Man Choi home run.
Grichuk left the game with lower back discomfort in the bottom of the inning. Derek Fisher replaced him in right field and Hernandez relocated to centre.
The seventh was an eventful at-bat for Toronto, as they loaded the bases once again. However, for the second time in the contest, they left the bases full as Lourdes Gurriel Jr. failed to connect, grounding to short to end the inning.
The Rays cut the lead in half when Yoshi Tsutsugo grounded out, bringing Manuel Margot home from third.
With the score still 4-2, Ken Giles entered the tilt with a chance to close things out in the bottom of the ninth. He struggled to do so, and the Jays had to have been worried with Yoshi Tsutsugo batting, as he hit 95 home runs in his last three seasons in Japan.
Tsutsugo wouldn't be the one to end things, but Giles walked him to fill up the bases.
With a 3-1 count and Choi at the plate, Giles was in some discomfort and left the game, with what is diagnosed as right elbow soreness. Brian Moran would take his place, hoping to give the Jays the series win. His first pitch was ball four, and the score creeped closer. 4-3 Jays, with the bases still fully occupied.
Then, Brandon Lowe singled on a ground ball, beating the pitcher to the bag at first, and Willy Adames scored to tie the game. The Rays came alive in the bottom of the ninth to score two runs, and had an opportunity to win the game with Yandy Diaz at bat. They would fail to do so, and this one would need extra innings.
Santiago Espinal started at second base for Toronto to kick off extras, a new rule for the MLB this season. He would steal third on a close call that merited video review, and eventually score on a sacrifice fly to left from Gurriel Jr.
Shun Yamaguchi would enter the game in the bottom of the tenth, hoping to help Toronto cling to a one run lead. But, with two on and nobody out, Kevin Kiermaier cranked a double, erasing any hopes of Toronto doing so. Kevan Smith and Jose Martinez would score, gifting the Rays a 6-5 win, and a 2-1 series victory.
The Jays will travel to Washington to face the defending champion Nationals in a four-game series beginning Monday at 6:05 PM.
Blue Jays Tampa bay Rays MLB MLBPA Rogers Communications MLB Network Chris O'Mera AP Riley G Wilson BarnBurner Network