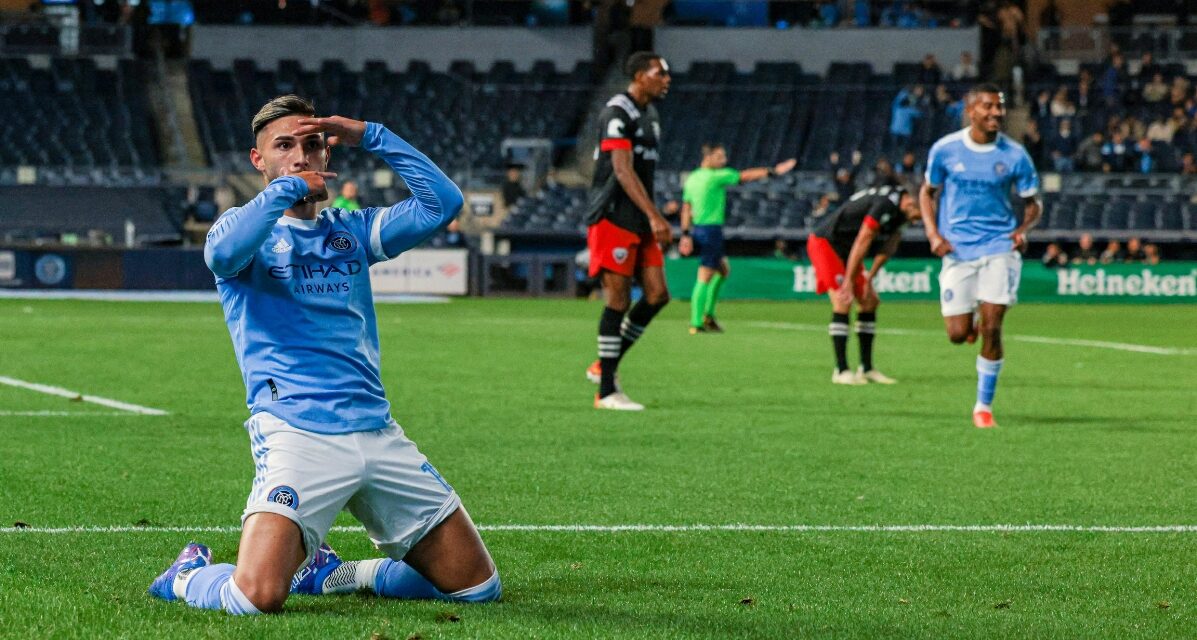 Photo courtesy of Vincent Carchietta, USA TODAY Sports
Article by Scott Churchson IG: @schurchson
Columnist and Host Spanglish World Networks, Spanglish Sports World
New York. - Yogi Berra is credited with the phrase “90 percent of the game is half mental.” Witticism aside, there's much to be said about that line as it took the Gents in Blue exactly 35 seconds to score the game winner in last night's match against division rival DC United last night on route to a crushing 6-0 win to vault themselves into 5th place in the East with 3 matches remaining. This was one of those matches where literally everything went right; from 3 goals in the first 11 minutes to a clean sheet on a largely untested Sean Johnson to 6 goals in a match for the first time ever.

Thiago scored in the first minute, Tati added two in the 7th and 11th minute, Maxi, Alex Callens with his first goal of the season and final goal by Jesus Medina rounded out a statement made when the team absolutely needed the most to make a statement to the league.

Before this match, NYCFC went a team record 509 minutes across 5+ matches without a goal and the sudden lack of offense took it's mental toll on the team. After Gudi Thorarinsson's goal in the literal 90th minute not only broke the streak, it seemed to break the weight off their shoulders. Pregame the team looked more relaxed, more confident and more ready to take on a DC United team that's struggled on the road. In doing so they've moved from 8th in the East all the way to 5th with a visiting Chicago team coming to the Bronx on Wednesday; a team with 10 points in it's last 5 matches.

2) With his two goals last night Tati Castellanos is back into third overall with 15 goals on the season. He currently leads the league in both shots and shots on target with 120 & 52 respectively.

3) With the offensive outburst New York is now tied with goals scored at 51 with DC United. New England sits in first in the entire league with 62.

4) Goalie Sean Johnson has been strong over the past nine matches with only two goals allowed in the past 8 matches and just 7 goals allowed during that run.

5) Despite the win, the East is still tight with just 1 single point separating 5th place from 8th. New York sits in 5th with 44 points but the Red Bull and Atlanta are only a point behind with a game in hand..

6) New York has yet to score a goal against the Chicago Fire in two matches this season, with a 0-0 tire in August and a 2-0 loss in late September, both on the road. The Fire overall have struggled on the road this season, going 2-11-2, but with a win and a tie on the road in the past two matches.