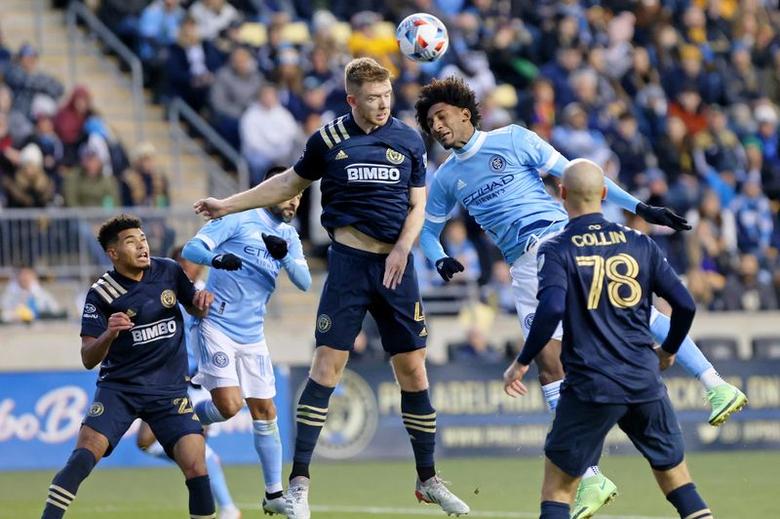 Photo courtesy of Bill Streicher, USA TODAY Sports
Article by Scott Churchson, The Sports Den & The Sports Insiders
Host and Journalist on Spanglish World Networks and Spanglish Sports World
CHESTER, PA. - In a battle of depleted rosters (but mostly Philadelphia), NYCFC overcame a 1–0 deficit in the 63rd minute to capture their first Eastern  Conference championship over a further depleted Philadelphia Union squad by the score of 2-1.
With the Gents In Blue missing leading scorer Taty Castellanos due to suspension plus Keaton Parks and Anton Tinnerholm and the Union with an unheralded 11 players scratched due to COVID protocols this was destined to be an even affair throughout; likely only behind decided by a red card or turnover (more on that later). The first half provided little with Philadelphia providing the only shot on target over the first 45+.
The second half however opened immediately with scoring chances by the Union putting pressure on goalie Sean Johnson and igniting the Union fan base of nearly 20,000 in attendance. At the 63rd minute a Dániel Gazdag cross pass deflected off New York City FC defender Alexander Callens to give Philadelphia a 1-0 advantage. Fans didn’t care, I felt the floor shake under the chanting. That excitement was short lived, as just 113 seconds later a right foot laser from Maxi Moralez from 6 yards out buried the equalizer in the top left side of the net.
Enter Talles Magno, the 18 year old Brazilian import that NY paid a whopping $12 million transfer fee for earlier in the season. In minute 88 after taking a cross pass from Gudmundur Thórarinsson, buried the shot to the top middle of the net for the 2-1 score, utterly deflating the crowd with the game winner; sending NY to its first ever MLS Cup final; traveling to Portland for a showdown against the Timbers on December 11.
The dream season continues.
5 Notes:
MLS Soccer MLS Cup Concacaf FIFA NYCFC Philadelphia Union