Lions continue their roar towards the March Madness Tournament 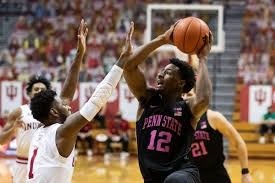 Trevor Ruszkowski, USA TODAY Sports
By Jeremy Schooler
Spanglish Sports World Columnist
University Park, PA. - Despite an overall record of 6-8, including 3-7 in the Big Ten, the Penn State men’s basketball team does have a path to the NCAA tournament, albeit a difficult one to maneuver. The Nittany Lions, who have had to navigate one of the toughest schedules in the nation, have three games remaining against ranked teams—not including the conference tournament—and have already beaten two ranked teams in Virginia Tech and Wisconsin. They are the only top 50 team with a losing record, and have kept games in the rigorous Big Ten close, losing by four points in both Ann Arbor and Columbus and two points in Bloomington. In addition, the majority of Penn State’s remaining games are at home, where they are 5-2.
With just eight games remaining, it is critically important that Penn State get hot and go on a winning streak, attracting the attention of the selection committee. In addition to the three ranked games they have left (one of which is on the road against fourth-ranked Iowa), the Lions also have multiple games against other bubble teams. Wins over Maryland (who they play twice) and Michigan State would bump Penn State up even more by fracturing the resumes of the Spartans and Terrapins.
Although Penn State hasn’t participated in March Madness (other than the NIT, which they won in 2018) since 2011, the team was a lock to make the field last year, until COVID caused the postseason to be cancelled. Despite losing stars Mike Watkins and Lamar Stevens, as well as coach Pat Chambers, who resigned, the Lions have shown this year that they can compete with and beat ranked teams and unranked tournament bound teams. Seniors Jamari Wheeler and John Harrar have flourished with significantly more playing time now available to them, and have shown the ability to score in bunches, rebound effectively and distribute the ball to the scoring trio of Myreon Jones, Seth Lundy and Izaiah Brockington.
It will certainly be a tough task for Penn State to be dancing this March, but it would be nearly impossible for most teams that have just six wins in February. In this unusual year, with an historically great Big Ten, it is certainly possible for the Nittany Lions, and only time will tell if they are able to get enough late season wins to earn a spot in March Madness for the first time in a decade.