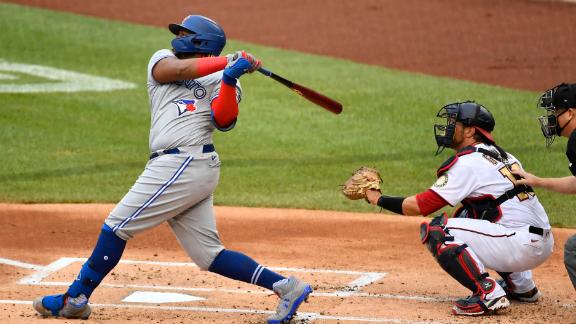 Photo courtesy of CBS Sports
By Jenn Connor
BarnBurner Network
TORONTO. - Great pitching, homeruns, and capitalizing on your opponent’s mistakes is a pretty tough combination to beat.
The Toronto Blue Jays had all of that in a decisive 5-1 win over the defending World Series Champion Washington Nationals on Tuesday night at Nationals Park in Washington.
The Blue Jays were playing without shortstop Bo Bichette and right fielder Randal Grichuk. Bichette was scratched from Monday’s lineup and is day-to-day due to left hamstring tightness. Grichuk left Sunday’s game against Tampa in the sixth inning with soreness in his right knee, but the injury is not believed to be serious. The Nationals continued to be without Juan Soto, the slugging outfielder having tested positive for Covid-19 just before the season opener.
Tanner Roark, a former National, made his first start as a Blue Jay and was outstanding, limiting the Nationals to one run on three hits over five innings of work to get the victory. The veteran righthander struck out five and did not walk a batter.    Washington righthander Austin Voth (0-1), took the loss.
The Jays jumped to a 1-0 lead as Vladimir Guerrero Jr. led off the second inning with his first homerun of the season. The Jays DH on this night, Guerrero Jr. launched a 1-1 slider from Voth to deep left field. Nats outfielders Emilio Bonifacio and Victor Robles, both running to make the play, met at the wall, leaping to try and bring the ball back. For a moment, it appeared that either one of them may have made the catch. Both however, came up empty and the Jays were on the board.
The Nats tied the score with two out in the bottom of the third inning. Shortstop Trea Turner ripped a 3-1 fastball from Roark to right for a double and later scored on a rbi single by right fielder Adam Eaton.
The Jays promptly regained the lead in the fourth inning, with Lourdes Gurriel Jr. jumping on a Voth cutter and driving it over the right centre field fence for his first long ball of the season.
The Jays extended their lead in the fifth. With one out, Joe Panik singled to left, and after Santiago Espinal flied out to right, Panik advanced to second on a throwing error by Nationals second baseman Starlin Castro that allowed Jays catcher Reese McGuire to reach. Teoscar Hernandez followed and continued his hot hitting, lacing an RBI single to left to score Panik and the Jays led 3-1.
With Roark’s work done for the evening, Jacob Waguespack relieved and was dominant over the sixth and seventh innings,  giving up just one walk and striking out two.
The Jays broke the game open in their half of the eighth inning. The frame began innocently enough, Reese McGuire taking advantage of the Nats’ infield shift, to reach on a bunt single. Hernandez grounded into a fielder’s choice, forcing McGuire at second. Cavan Biggio followed, his ground ball misplayed by Castro - his second error of the game and the Jays again made the Nats pay. Gurriel Jr. went down swinging and with two down, Toronto executed a double steal, Hernandez and Biggio advancing to third and second respectively. Washington’s fielding woes again played a part, third baseman Asdrubal Cabrera failing to handle a perfect throw from catcher Yan Gomes that easily beat Hernandez to the bag. With runners in scoring position, Vladimir Guerrero Jr. walked to load the bases, setting the stage for Jays first baseman Rowdy Tellez. Down two strikes, Tellez singled to rightcenter off frustrated reliever Will Harris to give the Jays a 5-1 lead.
Jays relievers Wilmer Font and A.J Cole each worked a scoreless inning to secure the victory. In total, Jays relievers limited Washington to just one hit, striking out six over the remaining four innings.
The Jays are now 3-2 on the young, abbreviated season and have won the first two games of their four game series with the Nationals.
The two teams are back at it tomorrow night with highly regarded prospect Nate Pearson making his MLB debut on the mound for the Jays. His opponent - three time Cy Young winner Max Scherzer in what should be a fascinating pitching matchup.
Toronto Blue Jays Vladimir Guerrero Jr. MLB MLBPA BarnBurner Network Jenn Connor