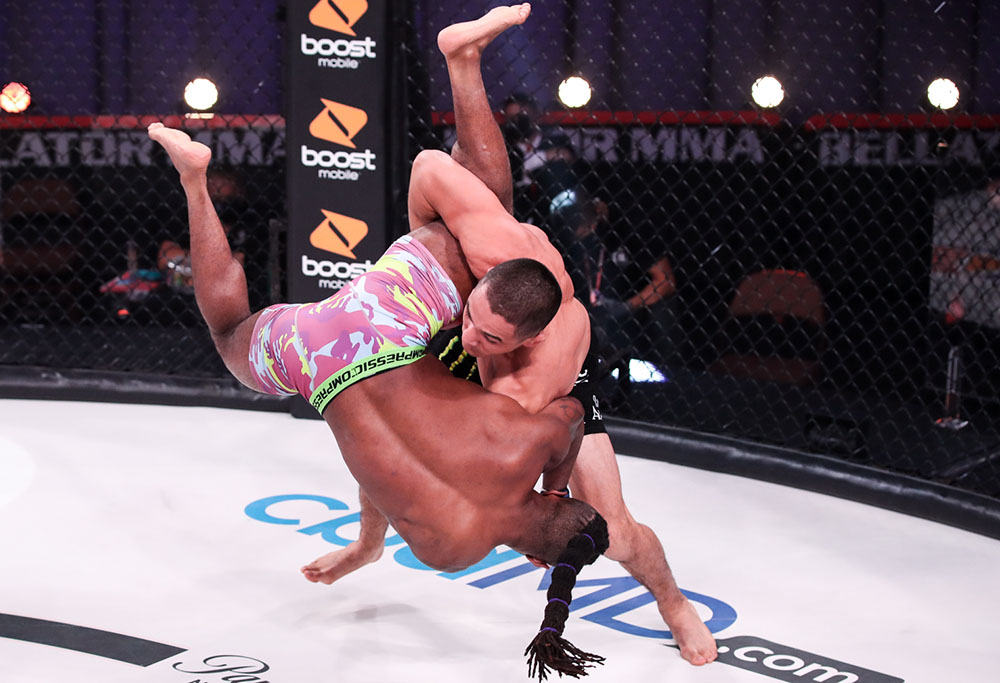 Photo courtesy of Bellator
By Giancarlo Aulino
BarnBurner Network
TORONTO. - Aaron Pico kicked off Bellator’s return to action on Friday night in dominant fashion. The 23-year old made quick work of Solo Hatley Jr. from the opening bell; he managed to take him down and maintained ground control with punches, before submitting him with a rear-naked choke at 2:10 of the first round.
The dominant win was Pico’s second straight and first win via submission in his MMA career. Pico looked a lot calmer in this fight as opposed to swinging aggressively for the highlight-reel knockout. What makes Pico so popular is that none of his fights go to the judges’ scorecards and tonight’s fight lived up to the billing as he improved his MMA record to 6-3, with all 6 victories coming via stoppage.
Pico allowed to himself to get a feel for Hatley Jr.’s movements and picked his moment to shoot for a takedown, where his impressive skillset took over.
I was able to ask Pico a couple questions during his post-fight media availability including if he would like to have another crack at lightweight while the Featherweight Grand Prix resumes.
Pico noted that at the moment, he does not see himself returning to lightweight, where he fought in his debut, as he would be a smaller lightweight and the weight cut to 145lbs is not as grueling as what other fighters may go through because the weight he usually walks around at is 164lbs-165lbs, so he makes featherweight quite easily and comfortably. However, he did not rule out a move in the future, stating that “maybe in a few years, yes, but as of right now I make weight really really easy.”
MMA Bellator Paramount Networks Aaron Pico Solo Hatley Jr. Giancarlo Aulino BarnBurner Network