509 Minute Scoring Drought Over, NYCFC Comes Away With Tie In Atlanta 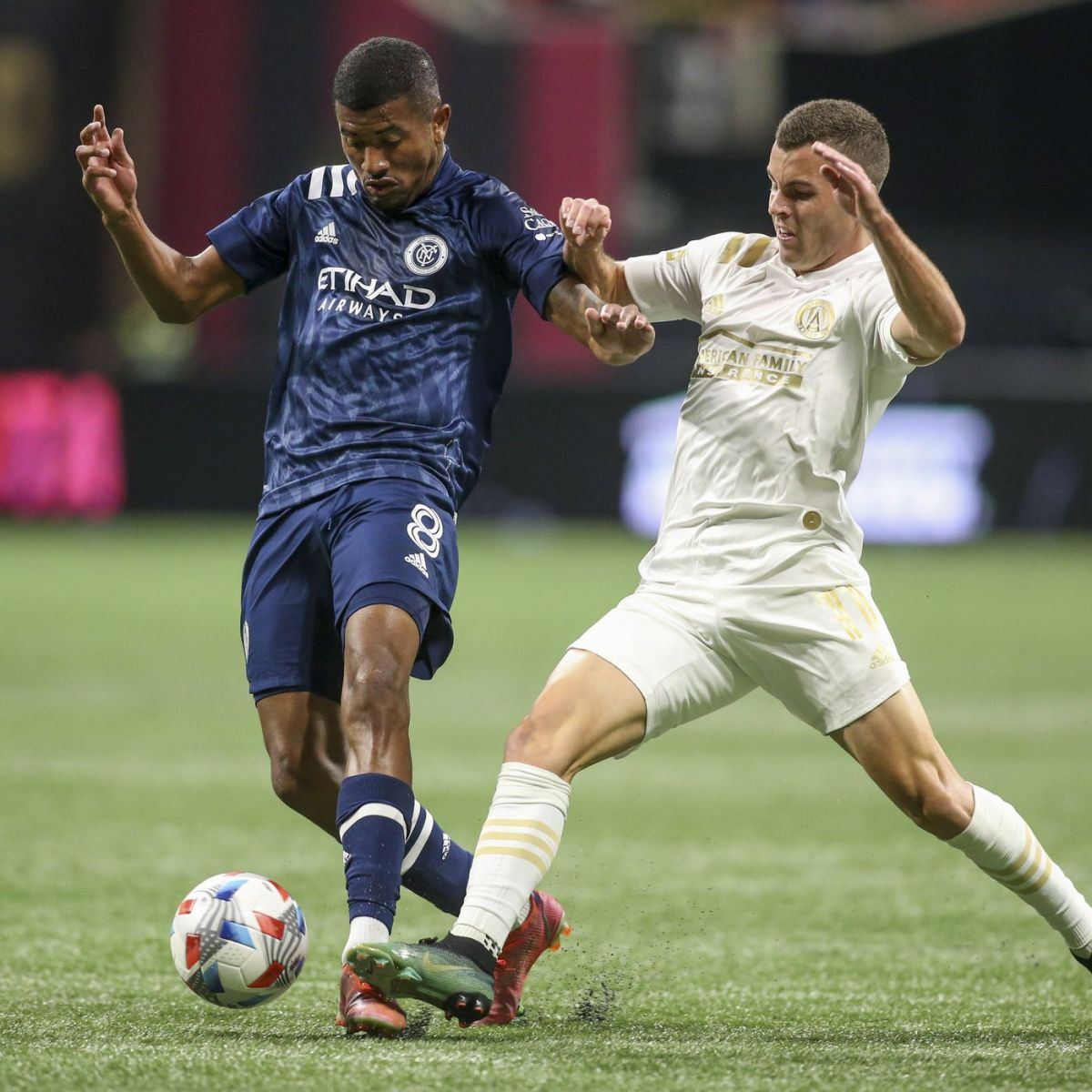 Photo courtesy of Brett Davis, USA TODAY Sports
Article by Scott Churchson IG: @schurchson
Columnist and Host Spanglish World Networks, Spanglish Sports World
New York. - It took an unseemly 509 minutes across 6 matches (including 4 straight shut outs) but the Gents in Blue finally scored a goal to force a 1-1 tie on the road against division rival Atlanta. For much of this match, it absolutely appeared that NYCFC would be shut out again, now for a 5th straight time, until the 90th minute when midfielder Gudmundur Thórarinsson's free kick sailed past Goalie Brad Guzan for an unbridled team sigh of relief. “I hope so.” was coach Ronny Deila’s response if this goal will lighten the pressure off the team going into their home match against 7th place DC United this Saturday; a match they need to win if they hope to stay in the playoff hunt.

In a game where they fell behind by the 17th minute, were out shot 7 to 4 on target, only had 45% possession and seemed to play on their heels for much of the match, coming away with a point in many ways feels like a victory given the previous month. Back in July, the question was, “What playoff spot will they land?” Now it’s, “WILL there be a playoff spot?” For the players, coaches, fans and even the NYCFC broadcasters, everyone had questions but no one had answers why a team, that for much of the season in fact lead the league in scoring suddenly failed to find the net. But for now at least, that question has been put on hold, but could quickly be asked again if they're unable to find the net at home this weekend at Yankee Stadium.

1) Gudi Thórarinsson's goal was his first one since the home opener on April 24, a span of 29 matches.

2) NYCFC currently sits in 8th place with 41 points in an extremely crowded Eastern Conference; 1, 2 & 3 points behind DC, Montreal & Atlanta respectively, all with 30 matches completed. Immediately behind them are the New York Red Bulls at 40 points and 29 matches.
3) During the scoring drought of the past five matches the Gents in Blue have only averaged 3 shots on target. In the preceding matches they averaged just under 6 (5.96 if you want to be technical)

4) NYCFC will be less likely to host any matches at rival Red Bull Arena next season with the first choice remaining at Yankee Stadium but now the second option to be Citi Field with RBA only if the first two options are unavailable. This should both delight fans and bolster attendance, as attendance at Red Bull Arena for “home games” have been abysmal this season.

5) This weekend they are facing a DC United team that has struggled somewhat to put points up in the standings, with only 1 point in their 3 matches in the month of October. Leading all of MLS in scoring is Ola Kamara with 17, however the 6'1” Striker from Norway has struggled of late to put the ball in the net with only 1 goal in the past 6 matches. Keeping him contained will be a big key to a New York victory this weekend.
FIFA Concacaf MLS Soccer NYCFC Atlanta United Mercedes Benz Stadium Brett Davis-USA TODAY Sports Scott Churchson The Sports Den Spanglish Sports World Spanglish World Networks Zingo TV